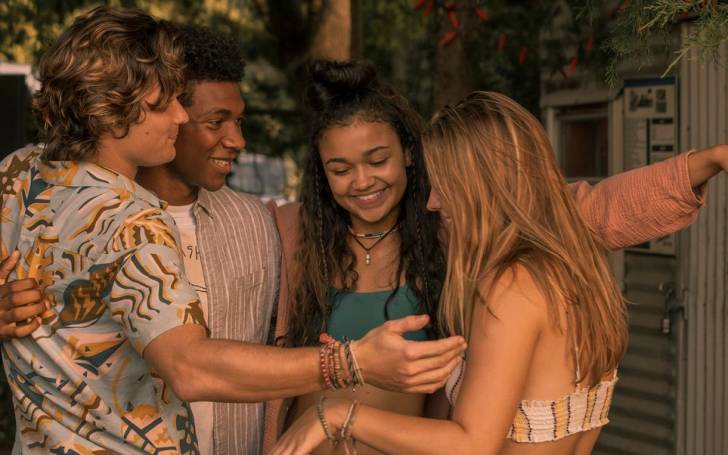 Yet another Netflix’s original made a big impact on the entertainment industry. This time around, it’s an action-adventure teen mystery drama, a genre with a huge fanbase, Outer Banks.

Besides, the show is a much-needed relief for people around the world as it gives our brain much-needed cognitive exercise, amid this pandemic.

In this article, let’s dive through the main premise of the show and find out about the cast, characters, and its review.

The entire show is based around the teenage group from Outer Banks of North Carolina called “Pogues.” They are trying to unravel the mystery behind the disappearance of their leader’s father. He reportedly goes missing after trying to salvage a sunken ship.

The main plotline follows the journey of John B.’s (Stokes) and his friends. Moreover, along the way, the group comes across a legendary treasure that is somewhat linked to John’s dad.

However, their journey isn’t endearing as it sounds as it is filled with thorns by two main nemeses. The first nemesis is the law and the other main antagonist is the group called Kooks.

Kooks are kind of like the guardians of the legendary treasure. They are a group of extremely wealthy and superior people from Figure Eight, who are hell-bent on stopping the Pogues, dead on its track.

To reach John’s father’s end goal that he was working for 20 years, Pogues must overcome challenges like money, drugs, friendship, fights, love, and how the rich always keeps on winning.

As with other Netflix originals, the show too has many new faces. We’re sure not many of you are aware of the actors and actresses involved in this series.

Main Cast and their Characters

Chase Stokes Plays John B: The Charismatic Leader of The Pogues.

Madelyn Cline is Sarah Cameron: Love interest of John B. and a former Kooks. Born into a wealthy family, her rebellious nature lures her towards our hero.

Madison Bailey is Kiara “Kie”: Although she is a Kook, the group rejects her as one of their own. She hangs out with the Pogues and her family has a successful restaurant.

Jonathan Daviss plays Pope: The brains of the Pogues operation. Probably the only one in the group who is responsible and tries to keeps his friends out of harm way.

Rudy Pankow plays JJ: John’s Best Friend and an avid surfer. John and Rudy know each other since third grade. His other characteristics include being funny, brave, and a lier but loyal to a fault.

Austin North is Topper: The leader of Kooks and Sarah’s ex-boyfriend. He is also a surfer. His aggressive demeanor somehow contrasts with his real feeling. He’s sensitive and sympathetic on the inside.

Charles Esten is Ward Cameron: Father of Sarah and Rafe Cameron. The rich and powerful businessman who is the leader of the Outer Banks Society.

Will there be a 2nd Season?

Now there isn’t any official confirmation regarding the second season of the show but fans are hopeful as the last episode left us with a lot of questions.

If rumors are to be believed, then the script for the second season was already in the works while the shoot of the season 1st. This time around the series might relocate to the Bahamas.

Moreover, showrunner Jonas Pate gave a little hint about the second season to Entertainment Weekly in April. He said,

“We’ve been working on that for a few months now. There will definitely be some new mysteries and some new ideas. It all comes off the same spine of the same story but it branches out in ways that hopefully the audience won’t see coming.”