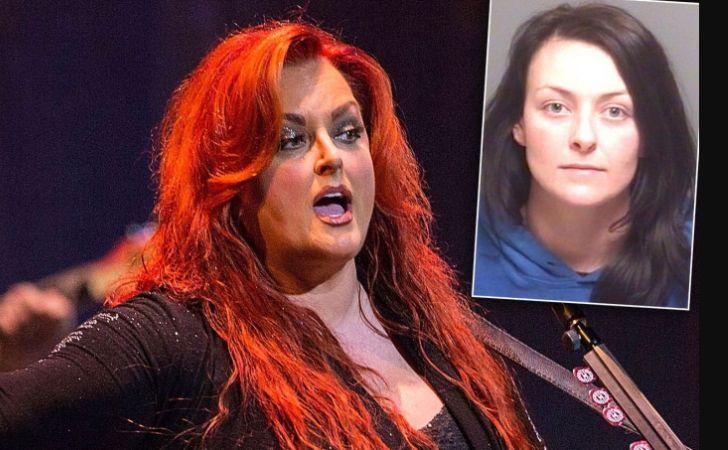 Grace Pauline Kelley is the daughter of Wynonna Judd and the granddaughter of Naomi Judd. Her mother is a famous country singer best known for being a member of the renowned duo The Judds alongside her late mother Naomi.

The star kid or should we call her the infamous daughter has been in the media for quite some time now. She has been arrested multiple times for probation violations including production, sales, and possession of meth. Many people are left wondering how and why Grace took the path she did. Did she have a troubled childhood? Where is she now?

Moreover, a lot of people are curious about Grace’s relationship with her parents. Well, in this article, we will provide all the facts and info regarding Grace Pauline Kelley, Wynonna Judd’s daughter. Let’s get going.

Grace Pauline Kelley Details Including Her Parents, Childhood, and Age

Well, Grace was born on 21 June 1996 in Nashville, Tennesse to Wynonna Judd and Arch Kelley III. Similarly, talking about her age, she is 26 years old as of 2022 and her star sign is cancer.

She has an elder brother Elijah Judd who is two years older than her. Further, talking about her racial background, she has mixed ethnicity; her mother is Scottish and German and her father has white descent. Grace is an American as per her nationality.

Her grandmother Naomi Judd was a successful country singer alongside her mother the duo had accomplished a lot throughout their career. Similarly her aunty Ashley Judd is also a successful American actress.

She has been a Problem Child From the Start

The singer’s daughter isn’t new to being in trouble. In the year 2011, she was missing for many days after a flight broke while returning home from boarding school. Similarly, a year later, in December 2012, she was sent to a six-month behavioral camp.

Furthermore, she also requested the court to give her aunt Ashley Judd her custody as she accused her mother of being abusive and a drug abuser which her mother denied. Despite the denial, Ashley got temporary custody and Pauline started living with her aunty in 2014.

Grace Pauline Kelley was Arrested for Meth, Back in December 2015

The infamous daughter was first arrested on December 18, 2015, at Nashville Walgreen Store. A statement confirmed that Kelley’s vehicle had been at the site for quite some time and detectives said they saw her exiting her car and entering the shop.

The cops pull her over for investigation as they saw the number plate for the vehicle just hanging by one screw. Similarly, while she was being interrogated, another individual at the scene handed the officers a plastic bag that was thrown from her car from the passenger side.

The officers searched the bag and found pseudoephedrine and a bill for the purchase of Coleman fuel. The statement shows that the products are required to make methamphetamine. In the investigation, officers found that Grace was banned from buying pseudoephedrine because of her consistent purchase. With all the evidence in hand, she was arrested with charges of meth manufacture.

Grace was Arrested Again for Meth Production, Distribution, and Possession

The singer’s daughter didn’t learn from her mistake as she was arrested on November 13, 2016, in Alabama for being a fugitive from justice and her case was taken to drug court for a total of eighteen months. Similarly, on February 20, 2017, she was behind bars for attempting to escape from the law in Tennessee and charged with drug use, escaping arrest, and two simple possession.

Apart from that, she was arrested on June 14, 2016, and pled guilty a year later on May 26, 2017, in Williamson County Court in Tennessee for meth production, sale, and possession. She was also found guilty of producing and distributing meth in Maury County.

Similarly, she was sentenced to 11 months and 29 days in prison. However, the sentence was revoked and she was made to serve 30 days in prison and later on probation. She was also found guilty of avoiding arrest and was ordered four years of jail time. Also, she served a total of 180 days in an in-house rehab. Grace was free from jail on June 16, 2017, and started her sentence in the prescribed drug program.

Grace Pauline’s probation was canceled after she ran away from the court-issued drug program. According to the statement obtained by RadarOnline, her probation was revoked on February 8, 2018. Talking with the magazine, a representative of Williamson County said,

She was sentenced to serve eight years. The meth manufacture, delivery, sale, and possession with intent charges run concurrent with charges at Maury County.

According to him, she fled from the program on November 19, 2017. A warrant against Grace was issued for probation violation.

Similarly, she was arrested for probation violation on April 30, 2020, and was sentenced to serve eight years behind bars. She was set to release on April 30, 2028. However, she was given parole during her April 19, 2021, hearing and was released with a caveat that Kelley would have to report to the Murfreesboro Probation and Parole Office.

The Tennessee Board of Parole gave its decision on April 22, 2021, offering her parole and release with a condition that she had to undergo substance abuse treatment, drug screens, and aftercare referral.

The infamous daughter of Wynonna is again behind bars as she has been arrested on August 28, 2021, for probation violation. She is currently serving her jail time in The Williamson County Jail. During all these years her looks have changed since she appears to have black hair in the mugshot and Grace also has a new face tattoo.

According to the rep of the Tennessee Board of Parole, her parole was canceled on December 20, 2021, and her parole review is said to be on December 2022. Likewise, she is set to be released on June 5, 2024.

Naomi Judd passed away at the age of 76 on April 30. According to Grace’s mother and her aunt, she passed away because of mental illness. The funeral was held two days later on May 2, 2022. However, Kelley wasn’t present during the funeral as she was arrested on August 28 2021 following a probation violation.

A representative of the Department of Corrections told that she wasn’t released from jail although prisoners can be released for attending funerals on a case basis.

The country singer didn’t like to talk about her daughter in front of the public. However, she talked about her legal case in February 2020. In an interview with John Rich, she said,

“I will tell you this. My daughter is the strongest Judd woman in our ‘herstory. She’s healthier than I was at 23. How she got there – I would not go that way, but I was also sequestered.”

She even said that if it weren’t for music, she would have gone through the same routes in her life.

A Short Bio of Grace Pauline Kelley’s Mother: She is a Singer

Wynonna Judd is an American country singer born Christina Claire Ciminella on May 30, 1964. She is one of the most well-known and respected female country singers of all time. Throughout her career, Grace’s mother had a total of 19 hit singles, making her one of the best-selling country music artists.

She started a band with her late mother Naomi Judd called The Judds. They were great together. The duo released seven albums along with 26 singles; from that, fourteen were top of the board. However, the duo decided to disband and they were separated in 1991.

Later, she began a solo career where she released eight studio albums and 20 solos. Her songs I Saw the Light No One Else on Earth & She Is His Only Need reached the top position in the U.S. singles charts. Similarly, in 2022, she was included in the Country Music Hall of Fame.

She is currently serving her sentence in jail as we said in the aforementioned heading. However, many tabloids have speculated her total fortune to be $500,000.

On the other hand, her mother Wynonna Judd is estimated to have a total fortune of $12 million. She has accumulated her wealth from her career as a country singer.