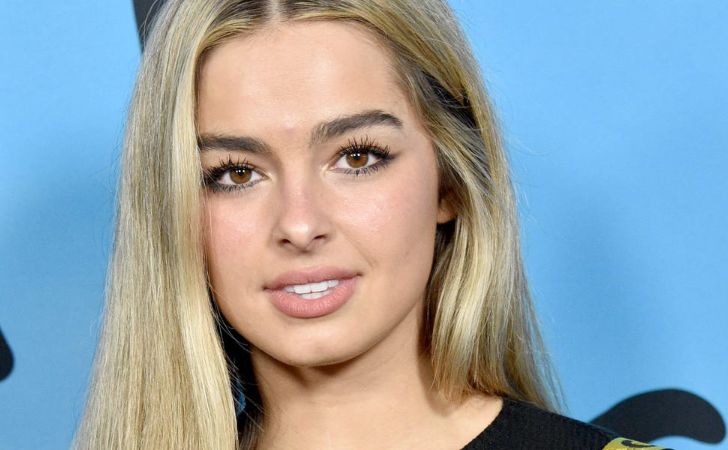 Many of us are shipping Addison Rae and David Dobrik for a while now. However, to your disappointment, it looks like the TikTok star is into someone else.

Recently, she followed a Basketball player on Instagram who is not only cute but also forward with flirty remarks. So Addison is finally dating or is it just a rumor? Who is this new “so-called” boyfriend of hers?

Not only this but Addison is also alleged to dating social media star Bryce Hall. While they initially denied their speculation, lately it seems they were in dating and have even already broken up.

Who is Addison Rae Boyfriend? Relationship & Break Up with Bryce Hall

As of now, Addison isn’t in an official relationship with anyone. That being said, there has been a lot of rumors surrounding Addison’s dating life. In May 2021, she was linked with American rapper, Jack Harlow. News of their romance first came to be when both of them were spotted attending a boxing match in Georgia.

After a string of social media posts claiming that Rae and Jack are dating, the TikTok queen set the record straight and tweeted that she is single.

Aside from the rapper, the social media star was also rumored to be dating Bryce Hall for a long time. But the couple never actually confirmed their relationship.

However, lately, it seems the couple was actually dating. In a recent video by ET Online, Addison candidly opened up about her break up with ex-boyfriend Bryce Hall. Talking about the reason of the split, she stressed the fact that both of them needed time to focus on the career and that she was too young to get serious about a relationship.

She first announced her split in a Twitter post on August 27, 2020. She wrote, “single and ready to jingle ❄️☃️⛸🎄 anyways Christmas is literally in 4 months wtf.”

Also on September 8, 2020, Bryce Hall too took to Twitter to write about the breakup he went through. Though he didn’t point out Addison’s name, it’s quite possible he hinted his break up with her. Check out the post here.

Before David, there was another guy with whom fans linked Rae. The guy was Bryce Hall, a fellow TikTok celebrity. Speculations started rising about their lovey-dovey when Addison moved to LA and started hanging out with Hall.

In an interview with Entertainment Tonight, she told her side of the story in the BRADISSON(ship name for Addison and Bryce) situation.

Though she admitted the duo is super close, the time still isn’t right for them to be in a relationship. According to her, their lifestyle disallows it.

“Things happened and we decided that we’re better off as friends for now because we both have totally different lifestyles right now, like apart from social media we are both looking to branch off to different things.”

You can watch the full interview below!

There you have it, Addison and Bryce never dated in the first place.

Who is Addison Rae Boyfriend? Linked with a Basketball Player

All of you will definitely be shocked to hear that apparently, Addison Rae has found a suitor. Rumor has it that Basketball player, Jordan Tucker is trying to woo the stunning social media star.

A few days ago, the 22-year-old Butler Bulldog‘s player shared a TikTok duet with Rae to the song My Life Be Like (Ooh-Aah). Interestingly, Jordan’s caption was something that stirred social media. It read, “I can make ya oooh ahhhh alright😅”

@jtea1#duet with @addisonre I can make ya oooh ahhhh alright😅

The video, which has now over 2 million views, had a lot of comments regarding the duo’s relationship. Many of Jordan’s fangirls were kind of disheartened by the duet while many shipped them.

When one of his fangirls shipped them and said ‘Addison won,’ Jordan replied, ‘Now that’s the right attitude.’

We can clearly say where this is going, right?

Addison and Jordan Tucker Followed Each other On Instagram

As if their duet wasn’t enough, both of them followed one another on their respective Instagram account. This is becoming more and more apparent, isn’t it?

Guess we’ll have to have wait and find out whether they are really into each other or just playing around.

Addison Rae and David Dobrik: Are they Dating or Just Friends?

David Dobrik is renowned across the planet for his YouTube channel. Ever since breaking up with Liza Koshy, the Slovak YouTuber never got into a long-term relationship because of which his fans are always eager about his relationship status.

Earlier this year in April, fans started calling David and Addison a couple as both of them appeared together multiple times. Despite the current lockdown, they collaborated for a few TikTok videos.

In one of the videos, where they performed on the track King’s Dead, her caption raised a lot of eyebrows. She wrote, “he’s so sexy @daviddobrik,” and it instantly sent the fandom into a frenzy.

While their actions might suggest otherwise, it might just be a friendly banter as Addison recently signed with David’s manager.

TikTok Star Dixie D’Amelio Is Dating: Who Is that Man of Her Life?