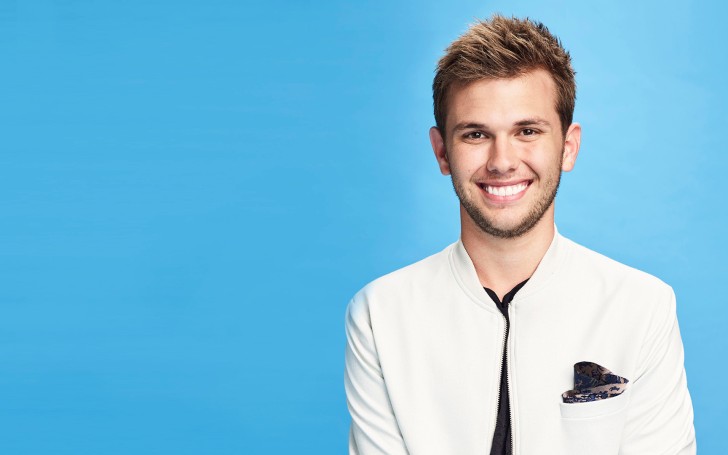 We all know Chase Chrisley from the show, Chrisley Knows Best. He started appearing in the show as a teenager and now he is all grown up. And when you grow up, its only natural you’ll date tons of girlfriends. In a similar fashion, Todd Chrisley’s son has had a few affairs.

At the moment, it looks like Chase is finally ready to call it a day to short-term flings. His relationship with his current girlfriend comes across as a fairy tale love story. And there are also speculations that Chase might even put the ring on it.

Let’s take a look at his current relationship status and his past affairs.

Who is Chase Chrisley Girlfriend in 2020?

Chase is currently in a happy relationship with a girl named, Emmy Medders. Chrisley has been dating his girlfriend for over a year. He made their relationship official on July 5th of this year by sharing a picture of the duo hugging. In the caption, he added a heart emoji.

On the other hand, Chase’s partner Emmy had made their relationship official one month before him on June 1st. In the post, she wished her best boy a happy birthday. Todd turned 24 this year.

Since making their relationship official, the couple has been making a lot of buzzes. Especially due to the fact that Chrisley’s family approves of his relationship with Emmy.

Well, isn’t it great for Todd? His otherwise strict father, who wants only the best for his kids, also approves of his girlfriend Emmy. In the same post where Chase made his relationship Instagram official, Todd was also one of the commenters. He said, “Be still my heart…”

Soon a fan commented on Todd’s remark, “Oh snap! We got a Todd ‘like’!” for which the Chrisley family patriarch replied, “I don’t give those ‘likes’ easily, my friend.”

This clearly indicates Todd likes the special bond between Chase and his newest girlfriend. Previously, Todd had been skeptical about Chase’s past relationship including his affair with Brooke Noury.

After Chase broke up with Brooke, Todd openly stated how he intends to keep his opinion clear. He maintained, “Listen, I’m not gonna say anything bad about anyone. If I don’t like ya, I don’t like ya. But my child, Chase, is broken-hearted over the fact that he’s single from someone that none of us like. I’m not going to lie to you, that gives me great comfort.”

After reading his statement, Chase sure is quite relieved as his dad acknowledges his romance with Emmy.

Chase Chrisley planning to get engaged with his girlfriend?

The 24-year-old reality star and his girlfriend are reportedly happy with the way their relationship is going. They are in no rush to walk down the aisle or even getting engaged. He recently opened up about their relationship in an interview with Life & Style.

He shared, “As far as she and I go, we’re taking things slow. We’re not in a rush to do anything. We’re enjoying each other’s company and learning more about each other and kind of just taking it day by day.”

While talking about the engagement rumor, Chase revealed, “I’m definitely not engaged, that’s for sure!”

Although Chase is not planning to propose any time soon, still he believes Emmy is the one. According to Chase, ever since she came into his life, he constantly strives to become a better version of himself. In the same interview, he also talked about his desire to be a better man for his girlfriend.

We can say, of all his past affairs, this one seems to be one. We sure hope this goes to the aisle sooner!

Besides, Chase’s half-brother, Kyle Chrisley has also moved on from his wife, Alexus Chrisley. He is also dating someone else and is happy with her.

Well, Chase’s girlfriend is not your average celebrity girlfriend. She has a career of her own in which she is thriving. Emmy is a Grady College of Journalism and Mass Communication Graduate.

Since January 2019, she works at Jenson Strategic Partners, LLC as a personal assistant. Previously, she worked at Insight Global as a Verification Specialist, from August 2018 to January 2019.

Chase Chrisley Past Affairs: He has had numerous girlfriends

1.) Brooke Noury: Nobody in the Chrisley family liked her

Prior to having such a stable relationship, Chase underwent a few heartbreaks. Sometimes because of his disapproving family and sometimes due to falling apart from his partner.

His first known relationship is with Brooke Noury. The duo started dating back in 2015, though they remained in an on-and-off relationship for a long time. Despite all that, the relationship continued on until eventually, they broke-up in 2018. Their relationship was well documented in season 6th of the show, Chrisley Knows Best.

In one of the episodes, Chase discloses that he and Brooke have parted ways to his dad. Todd revealed he had already got the wind of it as he admits of usually stalking his son’s social media to know what’s been going on.

Meanwhile, Todd was somehow relieved after finding out about his Chase’s break-up with Brooke. The family never really liked her.

2.) Lindsey Merrick: Dated her for a few months

After Brooke, Lindsey Merrick came knocking down. Chase started dating her since fall 2018, at least according to his social media post. We can say the duo might’ve hooked-up a few months prior to Chase making it official on social media.

The best part about Lindsey was the way she blended in with the Chrisley family. Both Todd and Julie liked her and heck, even the youngest of the bunch, Grayson seemed to have a fun time with her. But you know what they say, things rarely remain the same.

Due to some differences, Chase and Lindsey called it quits at the beginning of 2019.

In 2019, Chase started going out with Kayla Puzas. His new-found boo was born and raised in Georgia. Moreover, his bae wasn’t just an ordinary girl. Her list of ex boo’s included Dallas Cowboy quarterback, Dak Prescott.

At first, the former flames made their relationship official in August of 2019 to Life & Style Mag. Just a few months before the announcement, he added a picture with the beauty and called her, ‘wifey.’ We can say, Chase was quite into her.

What’s more, he also announced that Kayla will be featuring in the second season of Growing Up Chrisley, a Chrisley Knows Best’s spin-off.

Nevertheless, just like the other affairs, this too ended rather shortly. Reason behind their untimely separation never came out.