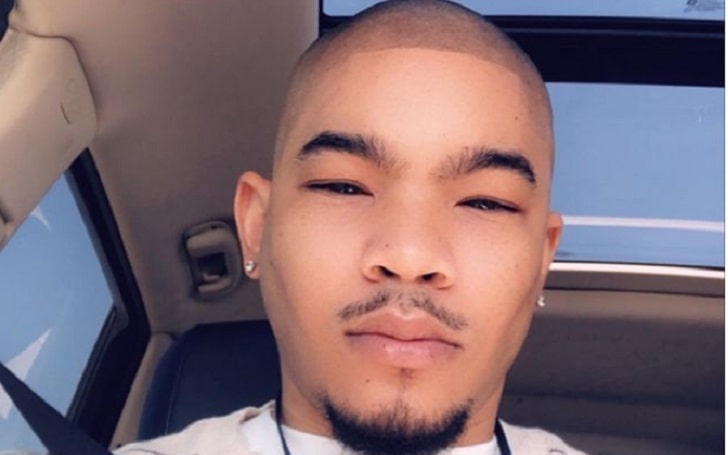 Dewayne Turrentine is an American model, actor, and producer. He is recognized for works in movies like Surviving, The Evolving Gate, and Almost Home. Further, Turrentine is also known for being a member of a Hip Hop duo named Quo. Similarly, he is equally in the spotlight being the husband of an American television, film, and voice actress Reagan Gomez-Preston.

His wife is most famous for her role as Zaria Peterson on the WB sitcom The Parent ‘Hood (1995–1999) and Roberta Tubbs in The Cleveland Show ( 2009–2013). With his spouse Reagan, he has been in marital life for 23 years. Alongside his identity, either as a celebrity spouse or as an actor and musician, Dewayne is an utmost family man. So, does he have children?

Well, here is everything to know about the Quo member and Reagan Gomez-Preston’s husband, Dewayne Turrentine. Read this article till the end to follow the details.

When Was Dewayne Turrentine Born? His Wiki

Dewayne Turrentine was born ‘Dewayne Turrentine Jr.’ on April 17, 1981, in the United States of America. So, the year 2022 marks him 41 years of age. Though not much is known about his early life, going through his social media, we came to know that he grew a decent life along with his parents.

Moreover, he was also pretty much into music from an early age and had even started training on his grandma’s piano quite early. On his social media, he shared his childhood photo with his hand on piano keys and captioned, “Just a Dena kid with a dream. 💫 #GoldenChild💫 #GrandmasPiano #Dena”

Besides, he belongs to the mixed-ethnical race and is American by nationality.

Dewayne Turrentine Is Close To His Mother


The musician with his whole heart admired and love his mom, Mrs. Faye. He, every year on mother’s day, wishes his mother on his Instagram. On May 8, 2022, Dewayne posted his mom’s photo on his Insta account by captioning,

All that I am, or hope to be, I owe to my angel mother. Happy Mother’s Day mom!!! #MyTwin #MothersDay

Though not much information is available on his mother, we get to know that Turrentine is very proud of being the son of his angel mom.

On the other side, his father’s name is yet out of media reach.

He Has a Younger Brother As Well

As per the information shared by him, Dewayne has a little brother named Dejuan, DT. He celebrates his birthday on February 6 and in the year 2021, the Quo member wished him his birthday captioning,

Happy Earth Strong Lil bro! Because I have a brother, I will always have a gift to my heart, and a friend to my spirit. . Love you enjoy your day!

Turrentine Was A Composer In Quo: What Is Quo?

Actually, Quo was an Australian- American hip-hop duo that was disbanded just within two years. It was formed in 1993. In the album, Quo, Turrentine rose as a composer and he worked in this hip-hop group in cooperation with his friend Wade Robson.

After a year of its formation, Quo releases 3 singles with the title Huh What, Blowin’ Up, and Quo Funk. Among these 3, Blowin’ UP came the hip hop hit list which was charted in both Hot Rap songs and Hot R&B/ Hip Hop songs list.

Quo gave Dewayne a strong identity as a talented musician even though the group was short-lived. With the end of the Hip-hop group, Dewayne pursued his career in modeling and acting and gained massive success.

Dewayne Turrentine Made His Acting Debut In 2006; He continued Music

The 41 years Quo composer began acting through the movie named Waist Deep in the year 2006 in which he portrayed the role of Syco Smoov. After that, he appeared in the 13 episodes of the TV series Almost Home as Scott after 7 years of debut. Later, he played Tempted by Satans.

Seems like, his whole professional career round-up in between these series in which he acted. In Almost Home, he also served as a music composer where he developed the theme music for the shows. Further, he composed theme music for the TV series Surviving (2015).

He Is A Producer Too

Alongside acting and music composition, he has also evolved as a producer. He worked as an executive producer in 13 episodes of the series Almost Home, and in 7 episodes of Surviving.

Similarly, in the pre-production Tempted by Satan, he served as a co-executive producer.

Since 1999, Turrentine is happily married to an American actress Reagan. The couple shared vows on November 10, 1999. Before marriage, the now husband and wife dated each other for four years. At the time when their relationship started, both of them were still a teenager.

As of 2022, it’s already been 23 years of their togetherness, and still their bond as husband and wife going strong. Both of them keep sharing each other on their respective social media account. On the occasion of Mother’s Day on May 8, 2022, Dewayne posted a post admiring his beautiful wife on his Insta. He wrote,

Similarly, his spouse, Reagan also mentioned her partner as a king. With a family photo, She wrote, “Had an amazing day with the King of our castle. Happy Father’s Day honey🥰”.

He Is A Proud Father Of Two

After 8 years of his marriage with her loving wife, Preston, Dewayne Turrentine finally became the father of a daughter named Annette Turrentine. She was born on May 13, 2007, in the United States which makes her 15 years of age as of 2022. Coming up to the present, Annetteis is already into the games; she is a soccer player. Regarding this, Dewayne shared her playing video and said,

Further, she is a student in Intermediate school and was a High Honor Roll student for 1st trimester in 2020.

Similarly, Dewayne became a father of a son for the second time. His son Tyger Attila Turrentine was born on April 2, 2011, and the year 2022 makes his son 11 years old.

Dewayne Turrentine Has A Verified Instagram: His Other Social Media

The father of two is hugely active on Instagram under the username @goldenchildprince with 10.5k followers where he keeps sharing his personal and professional stuff. His intro in his Insta account is catchy which says,

The greatness in me is not in how much wealth I acquire but in my integrity & ability to affect those around me positively Scarlett and Tygers Dad.

Further, he is also on Twitter under the username @PrinceSyc (Golden Child) with 32.1k followers and 11.9k Tweets in total. Moreover, short videos on Sewayne Turrentine Jr. are available on TikTok.

He undoubtedly has had a successful professional career. Over the course of time, he not only appeared in numerous movies but also released several successful singles. Thus, his fortune is expected to be pretty high. While no official data about his net worth is available, sources estimate it to be easily in the millions.

Likewise, his wife has a fortune of $1.5 million as per sources.