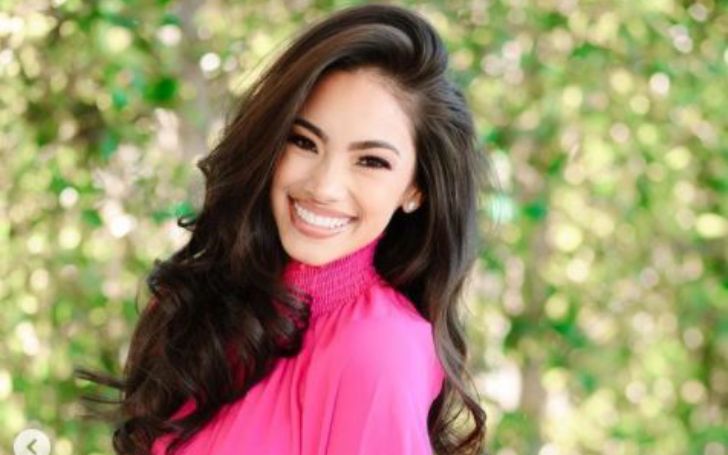 Bryiana Noelle Flores is an American model and entrepreneur. She became famous all around after marrying retired skateboarder, Rob Dyrdek. The couple is the parent of two beautiful children.

Bryiana’s husband Rob is an entrepreneur, actor, and producer. His role in the reality shows, Rob & Big, Rob Dyrdek’s Fantasy Factory, and Ridiculousness. Apart from Tony Hawk, Rob is also one of the ‘most influential skateboarders of all time.’

Besides, we all know a lot regarding Rob but what about his wife Bryiana Noelle Flores. What does she do for a living? Where is she from? Let’s find out all the answers.

She was born on July 21st, 1991, in California, the United States. She is the daughter of Brian Flores and his wife. Noelle belongs to the mixed ethnicity of Chinese, Cherokee, Caucasian, Spanish, Blackfoot, and Filipino.

The celebrity spouse grew up in Salinas, California alongside her brother Aaron Flores. Her early life was riddled with troubles as she suffered from a terminal disease just at the age of 11. Fortunately, she persevered through it all and became a healthy individual.

Talking about her education, she studied at a local high school in Salinas.

Bryiana overcame many obstacles to reach where she is now

As we mentioned earlier, she had to get over a lot of obstacles in order to be where she is today. Aside from her battle against a terminal disease, she also had trouble during her childhood. She was diagnosed with aplastic anemia at the age of 10.

After the diagnosis, the doctors even told her she only had a couple of days left unless she would have a bone marrow transplant. Unfortunately, the family couldn’t find a donor, and the little child had to endure chemotherapy treatments and multiple blood and platelet transfusion. Miraculously, she went into remission and survived the ordeal.

But her problems didn’t stop there. During high school, she was a victim of bullying. Her classmates used to bully her for her lean body, height, and ethnicity. Despite all the onslaught of bullying, she soldiered through it all like a champion.

The early troubles in her life helped her in developing thick skin.

Bryiana Noelle Flores is an acclaimed model: Her Journey towards success

Well, just like her husband who is a multi-talented individual, she is also multi-faceted. From being a model to an entrepreneur to a philanthropist, Flores is really good at what she does.

Initially, she wanted to be a model so while studying in high school, she decided to go for it. But there exists a major obstacle in her path, her height. Standing at a height of 5ft 3 inches, it caused her a lot of trouble earlier on.

However, as we stated above, the ever-so-resilient girl didn’t give up on her dreams just yet. Eventually, she got into the modeling world. After a couple of small failed attempts, she scored a few jobs for herself. Then the year 2008 came as a blessing for her as she won the Miss Teen of Nation in the year.

Subsequently, Bryiana won the Miss California teen in 2010. Then in the year 2013, her career reached a new height after she became Playboy Magazine’s Playmate of the Month. The very next year, her career as a model reached an all-time high when she won the World’s Perfect Pageant.

Bryiana Noelle Flores is an Entrepreneur like her husband Rob

Being the ambitious lady that she is, Bryiana didn’t stop at just being a model. She is also a businessperson and is the president of Iconic Beauty. Her company is all about helping women have that perfect hair all the time. According to her company, “a good hair day can make you feel immeasurably powerful from the inside.” We’re sure all the ladies also agree with the statement.

Apart from this, she also operates Iconic Beauty Wines. Bryiana alongside her two best friends throws random parties and they are together on a journey towards wine tasting.

She certainly is an entrepreneur born and bred. Having able to turn your passion into money is something not many people can do.

Not only do the lovebirds earn the big bucks from their professional life, but they are also taking care of society side by side. They often donate to many charitable events.

You see it was this very foundation that helped Bryiana push through the terminal disease she was facing. At the time, someone had carried out one of her wishes which gave her the strength to beat the odds.

It was back in 2013 when the lovebirds first came across each other in an event. They instantly had a terrific connection and decided to exchange numbers. On their very first date, the duo went to Bakersfield on a chopper to rescue puppies. Yeah, that’s right, they went to rescue puppies.

On the eve of their 3rd wedding anniversary, Rob stated on his Instagram account that he knew she was the one during their first flight together. As if their first date wasn’t grand enough, the proposal set the bar even higher.

Rob took her to watch the Alladin show. Then suddenly he vanished only to appear right on the stage riding an elephant. The Genie then asked Rob his three wishes. He first asked to be a part of the show, the second wish was to share the stage with his girlfriend, and in the third wish, he asked Noelle if he will become his wife.

After getting engaged, the pair exchanged vows in a beautiful ceremony on 19th September 2015. At the time of their wedding, the lovebirds pledged that they will renew their wedding vows every five years. They made their first renewal in September 2020, despite the Covid-19 pandemic.

The couple is a proud parent of two kids

From their relationship, the pair became a proud parent of two children, a son, and a daughter.

They welcomed their son, Kodah Dash on September 9th, 2016. At the time of his birth, he weighed 7.7 pounds. Then around a year later in December 2017, Bryiana announced she became a mother for the second time and gave birth to a daughter named Nala Ryan Dyrdek.

Bryiana shares a lot of photos of her beautiful family on her Instagram account. They go on many exotic vacations together and spend a lot of quality time together. We can say for sure they are raising their kids with lots of love and care.

She and her hubby Rob own three mansions in Los Angeles in the Mullhond Estates area. In 2015, Rob brought a 3.1-acre land for $9.9 million, then in 2018, he purchased a 6,800 square feet home in the same neighborhood as the land he brought.

Then in 2020, he acquired yet another house in the same neighborhood for a staggering $8.5 million. As of now, Rob’s net worth stands at $100 million.

Safe to say, the family of four lives a rather lavish life.