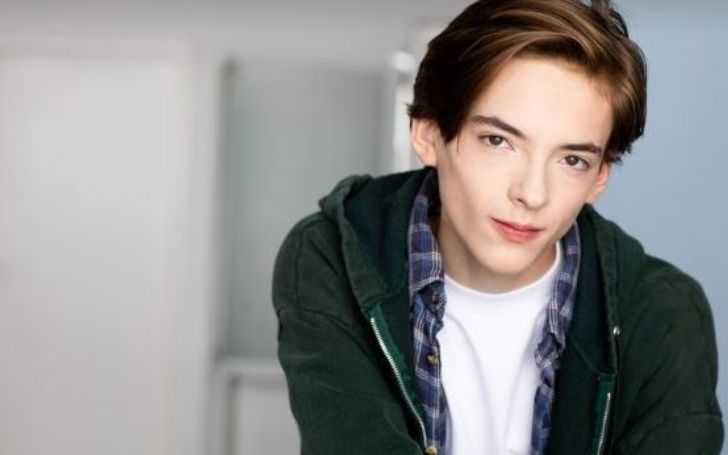 Jonah Beres is a former theater actor who now is known for his role as Brandt in the Hulu’s Emmy nominated cringe comedy series PEN15. Beres is known for his vulnerability, spot-on facial expressions, elegant demeanor, comedic choices, and the ability to be in the moment once the director calls the action.

From the characters he’s brought to life on the stage and screen, Jonah Beres has become one of Hollywood’s most handy young actors.

Know more about this rising young talent as he continues to make his name in the showbiz. Get an extended look at the start of his acting career, his breakthrough, his personal life (girlfriends and family), and so forth.

Jonah Beres Is From Seattle Washington

The 20 years old, Beres is the only son and youngest of three siblings.

He has a sister, Simone Beres who is a couple of years older than him and started acting after him.

She is a college student studying screenwriting and directing.

Beres who is half Latino attended public school for most of his academic years, except for a two-year stint at Brighton Hall.

The Seattle native graduated from High School with the quarantine class of 2020.

Beres Is The First Actor From His Family

While he is the first person to join the acting from his family, Jonah does have a distant relative who is also an actor. Both of his parents have their own businesses.

Jonah Beres States His Mother Was Supportive Of His Career

The five-foot-eight-inches tall Jonah says his mother was very supportive in allowing him and his sister to pursue acting.

It was she who got them, agents and manager when they moved to LA. Beres says his mother does everything behind the scenes.

How Did Jonah Get Into Acting?

In an interview, Jonah revealed when he was a kid, his mom would take him to all these plays, and it was from there he developed an interest in acting. Beres additionally said he really enjoyed all the stage makeup and ‘stuff like that.’

Jonah started his training at age 6 when his parents got him admitted into Broadway Bound BB, a children’s theater group in Seattle.

After that, the young actor from Seattle, Washington first played Peter Pan in his inaugural BB musical from the director Gregg Gilmore, who studied under the late Sanford Meisner in NYC.

Gilmore was also largely responsible for Jonah signing with a local talent agent after planting the seed with his mother about getting him representation.

The Washington-born young adult began getting more promising roles at 10.

It happened when he took to the stage as the beloved young Ebenezer in the adaptation of Charles Dickens’ novel, A Christmas Carol. They though titled it, musical Scrooge, from the production house, the Seattle Musical Theatre company.

A year later, Jonah’s sister would also decide to join. She subsequently got to star opposite him in the iconic roles of the sly “Rooster Hannigan” and zany “Lily St. Regis” in Annie.

Critics defined Beres in theater as a boy who had a confident stage swagger and a laugh-out-loud effect on the audience.

Not long after joining the theater, Beres would get what was known as “the Jimmy call.” It was a term for a personal phone call slating him for the lead roles in several upcoming shows.

Beres’ film acting career would begin to take off in 2012.

That year he had roles in several independent short and full feature films. Some of the characters he would play were Matts Chance with Edward Furlong (Best Dark Comedy Houston WorldFest) and Different Drummers (Best Family Movie at the 2013 Houston WorldFest).

Beres went on to build an excellent reputation within the Seattle film community with directors and producers. He got three movie roles from Connor Hair, an award-winning independent film director.

In the same year, Beres’ parents would sign him up for an open casting call with more than 600 other kids at a department store in Seattle.

Not long after, now the 20-year-old signed with their theatrical division as well. In 2014, Beres and his family moved to Los Angeles. The move facilitated him and his sister to pursue a career in the cinematic arts.

Jonah’s first role after moving to LA was playing Johnny Keating, the son of an Irish immigrant family in the 1950s stage drama Corktown 57’.

For the next two years, Beres would have a succession of movie and television roles. In the summer of 2015, Jonah started acting in the eco-thriller Strange Nature, a horror genre film by FX Guru Jim Ojala.

In Strange Nature, Beres portrayed the role of Brody, the son of Kim Sweet (the late Lisa Sheridan), and grandson of Bruce Bohne (Fargo).

A year after starring in Strange Nature in 2015, Beres, in 2016, landed a role in Girl Flu alongside American Girl star Jade Pettyjohn.

Beres’ next film was the 2018 feature movie Stephanie, a Blumhouse production.  In the film, he played the character Paul, Stephanie’s older brother, with onscreen parents Frank Grillo and Anna Torv. In the same year, Beres also played Arden in a story of an orphan boy who finds his voice in the AFI film ALOUD.

Jonah Beres made his television debut in 2017 as a guest star in the short Netflix episode series Small Shots. In Small Shots, Beres plays a cocky foul-mouthed boy named Hunter Goldberg, the king of his Barmitzvah party.

Jonah’s other television guest appearances were TNT’s Animal Kingdom as young Baz starring Ellen Barkin and TruTVs comedy series Those Who Can’t.  The latter is known for having famous comedy guest stars.

The 2012 Brightwood actor also has had a recurring role on the ABC series Splitting Up Together as Mason Wagner’s best friend Jules. His character shamelessly flirts with Mrs. Wagner (The Office actress Jenna Fischer).

In the movie, Jonah played the protagonist character Sam Wheeler. Wheeler is a 14-year-old boy who becomes the target of bullying, and his ‘me against the world’ mentality leads him to discover his superpowers.

The film went on to win many prestigious awards including the top grand prize at Hollyshorts Film Festival in Hollywood. It later also received an Oscar nod in the short live-action film category.

Jonah Beres In The Hulu’s PEN15

In the series, PEN15, Beres portrays the character Brandt, the popular, cool kid, douchebag Maya has a crush on.

Beres’ character, Brandt is a junior high school bully. The fans know the character for constantly teasing and mocking Maya and Anna throughout the school year. The series received an Emmy nomination for Outstanding Writing in a Comedy Series.

Does Beres Have A Girlfriend?

Beres does have a girlfriend. Jonah introduced her to his Ig followers on Jan 6, 2020. He shared a series of three pictures two of which featured himself and a brunette wearing a loose hoodie.

While Beres didn’t mention what his partner’s name was, he did throw a caption alongside the pictures writing, my baby (more precisely an emoji of a baby).

Beres has been presenting her on his Insta as his partner ever since through several stills. Although the Strange Nature is yet to reveal the name of his girlfriend, it is believed she goes by the moniker Maya.

Is Jonah On Social Media?

While Beres is active on social media most specifically on Instagram, for the most part, Jonah keeps his personal life separate from his professional one.

The Balloon actor’s Instagram profile with the handle @yupwet is more about who he is as a person and what he cares about rather than promoting his acting career.

Jonah’s posts are artistic and socially conscious with no captions so that people can interpret them in their own way.

As per his Instagram, he has his own unique style of dressing, he seems to like visiting flea markets and collecting vintage clothing and accessories.

Beres also has an online store on Depop where he sells some clothing items.

Jonah’s favorite movies are Avant guard and he has a DVD collection of his hard-to-find favorites.

The Small Shots actor listens to all genres of music, frequently visits record stores, & also creates digital music that he sometimes posts on his Insta feed.