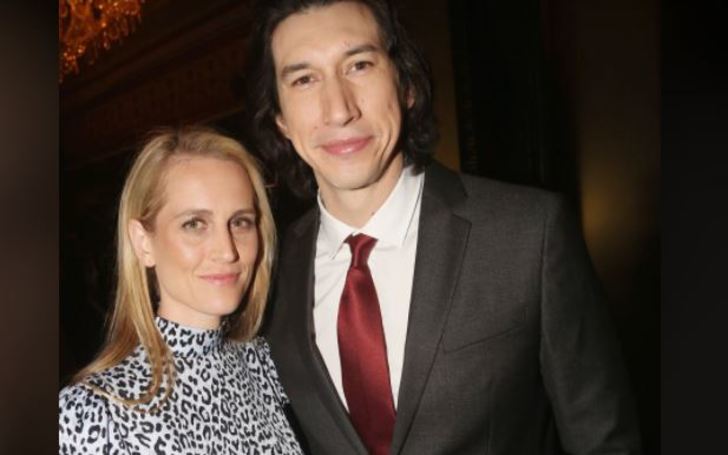 Joanne Tucker is the wife of the Star Wars actor Adam Driver. She is also an actress known for films like Gayby, Listen Up Philip, a podcast series, Wolverine, The Report, and the series, American Rust. Tucker and her husband Adam have been married for more than eight years with a son in between.

Adam Driver has seemingly enjoyed a meteoric rise to fame since he first gained ground in HBO’s Girls in 2012. Joanne’s spouse, Adam, an actor of Dutch, English, German, Irish and Scottish ancestry, became a household name after his breakout role as Adam Sackler in HBO’s dramedy, Girls.

He though is also extremely stealthy about his relationship with his wife and son. Here’s everything you need to know about the notoriously private Joanne Tucker, wife of the Academy nominee actor, Adam Driver. Take a look back at her wedding to Adam, every time she appeared alongside her husband to when she met her future husband.

Joanne Tucker Was Born In Bermuda

Tucker was born on June 26, 1982, in Bermuda. Though there are other reports that state she was born in Brooklyn, New York. Joanne is the daughter of Bermudian Henry Tucker and granddaughter of Sir Henry Tucker, the first Government Leader of Bermuda. She has a sister who has a peacoat business.

Joanne left the island at four years old with her mother, Cynthia May when her parents divorced. The wife of the Silence actor would though return regularly to see her family.

After leaving Bermuda, Joanne spent much of her childhood in New York and Connecticut. She started out in ballet as a young child but eventually decided to pursue acting in high school.

Tucker once revealed to The Royal Gazette that she used to spend her summers in Bermuda.

Driver says his wife reads a lot of books and knows a lot of things. Joanne’s family lived in Waterside Plaza, in Murray Hill.

When Did Joanne Tucker Meet Her Husband Adam Driver?

Joanne met Adam when the former was studying at Julliard, the prestigious drama school in New York, in the early ’90s. The duo got engaged in 2012 and then married in 2013 on June 22 at a secret wedding destination.

There, however, are no pictures of the big day. Allegedly though Adam’s Girls co-star Lena Dunham and her then-boyfriend Jack Antonoff were among the attendees. They celebrated their nuptials in Bermuda. Richard Feldman, a Juilliard teacher, officiated their wedding.

Adam calls her his “biggest hero.”

Acting alongside her husband, Joanne had a cameo in Girls, the HBO series that made the Blackkklansman star a household crush. Though she was with him before the Girls’ fame. They also appeared alongside each other in 2012’s Gayby. Additionally, other projects where they shared the screen are the “Hello Kitty” episode of HBO’s Girls and the 2019 movie The Report.

The couple both love theatre and the arts. Together, they’ve also made a short film called The Basement. The college mate turned husband and wife additionally appeared in the film The Report (2019) about the senate intelligence committee report on torture.

They Run A Non-Profit Organization

Joanne along with Adam run Arts in the Armed Forces (AITAF), a non-profit arts programming organization for individuals working in the forces. They founded it after both of them had graduated college in 2009. The former is currently the Art Director of the organization.

The pair started the non-profit organization during Adam’s third year at Juilliard. Their campaign brings high-quality arts programming to active duty, veterans, military support staff, and their families around the world free of charge.

The Couple Is Very Private

The couple is incredibly distant from social media. In fact, there’s basically only one selfie of them in existence. They though are red carpet regulars and are seemingly willing to pose for such events. They have been each other dates for several premieres, the Emmys, Cannes, the Golden Globes, and the Oscars.

Joanne Tucker Is A Mother As Well

Joanne is a mother of a son. She and her actor husband had a baby in 2016 but the couple kept the news totally secret. Even in the interviews, Adam tried to contain the news. While talking with W Magazine, he slipped up and mentioned a child, before immediately backtracking (and laughing awkwardly).

It was his Logan Lucky co-star, Channing Tatum who let it slip that his friend had a child during a press junket. However, even then Adam managed to give a zero comment.

It wasn’t until October 2019, when Adam finally confirmed that he and Joanne had a son. He explained the reason he didn’t talk about his child was his wish to keep things secret thanks to his time in the navy. The Report star explained he finds it difficult to be in public and live life and experience when he’s in the focus all the time.

It was Joanne’s sister who accidentally made her Instagram account public and someone noticed the back of her son’s head in one picture, the news later wound up on Page Six. She and her husband, however, still has not revealed their son’s name.

The couple also has a family dog, a Rottweiler-Pitbull mix named Moose. The Bermuda-born actress along with her partner and son live in Brooklyn.

What Other Films Or Series Has Joanne Appeared In?

The blonde actress Joanne made her acting debut in the 2011 short film Loft. So far she has credits in seven short movies including Loft. Some others include After You Left, Party Trick, I’m Coming Over, Jack Heart Jump, and Babes.

Further, she has starred in films like The Report (2019) and Give or Take (2020). She has also been in a number of off-Broadway productions. In 2016, she appeared on Showtime’s Billions as Sandy Steam in an episode titled, The Deal. Tucker has also done voice-over work in Ken Burns’ Prohibition and the Roosevelts. She likewise has a handful of off-Broadway credits.

Her recent projects are the 2020 film, Give or Take, and the series, American Rust where she portrayed the character of Pam Novick.

What is Joanne Tucker’s Net Worth?

Unfortunately, she has not revealed the sum of her wealth. But as one of the most notable faces in Hollywood, Joanne’s husband is certainly a millionaire. And his affiliation to box office contenders like Star Wars only sort of ensures that he is not stopping to pull in millions more anytime soon.

What’s more, Tucker’s partner, in recent times, has been a very busy actor. That said, it shouldn’t be a surprise in knowing the six-foot-two-inches tall Hollywood star holds a net worth of over $16million.

Joanne Was Spotted With Her Kid And Hubby In Rome

Joanne moved with her son to Italy when Adam was filming for House of Gucci. Some tabloids managed to catch the picture of the trio in Rome, enjoying ice cream in the park with Moose in tow.