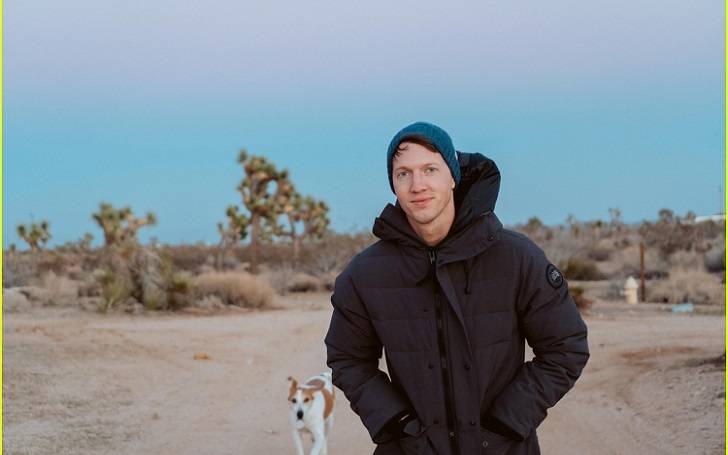 Steven Piet is a Hollywood personality, who is a director and a producer. Likewise, Universal Content Productions has signed him up for a deal since 2019 and has made various movies and TV shows. While his movie Uncle John has landed him a handful of awards and nominations, he was successful in securing a spot as a nominee for Emmy Awards for the documentary Girl Rising.

However, Piet is more famous as the fiancee of actress Joey King. The Kissing Booth star has received Kid’s Choice Awards and the People’s Choice Awards. Similarly, she has been nominated for the Golden Globe Awards and Primetime Emmy Awards as the Best Actress for the miniseries The Act. Her current project The Princess is gonna be released soon on the 1st of July this year. Moreover, she’s already been approached for and signed up for her upcoming project We Were The Lucky Ones. Besides, the Emmy award nominee has also worked as an executive producer.

So, know about Joey King’s beau, Steven Piet’s age, parents, movies, and Instagram. Furthermore, read on to find out how did they meet? Their engagement and more.

As of 2022, Steven is 30 yrs old and he will soon be celebrating his 31st birthday. The producer was born on 22nd May 1991 in Chicago, Illinois, in the USA to father Anthony Piet Jr. and mother Sharon Piet. His birth sign is Gemini which symbolizes a sociable and lively personality.

As for his ethnic background, his ancestry traces back to Polish origin. Upon our research, his last name Pietruszka refers to an occupational name in Poland given to a person who sells herbs. Although he was born in American land and his parents are also American nationals, his forebearers seem to have migrated from territories of Poland.

Talking about his height, Steven stands tall at 6 feet 1 inch.

Steven’s dad Anthony Jr. is an automotive professional who was a consultant at Referral Rewards. His dad has 25 yrs of experience as a former New Car Dealer in a company based in Chicago. On the contrary, his mom Sharon is a finance advisor and expert in the field. She has worked in Podesta & Co. as a Senior VP Investment Advisor. Also, she became Sr. Wealth Advisor at My Advisor and Planner in July 2015.

He belongs to a well-educated family as well. While his dad went to Northwood University, his mom attended Edgewood College at Madison in Wisconsin. Apart from his parents, his family consists of Sara J Piet who probably is his sister, and 2 aunts, Natalie Letitia and Antoinette.

In addition, Steven is the grandson of baseball player Anthony Pietruszka aka Tony Piet. It was his grandfather who just adopted the last 4 letters of his surname as the whole name didn’t fit on the scoreboard in the match at Pittsburgh. Moving on, Tony was a former White Chicago Sox’s second and third baseman. Later on, he opened a South Side auto dealership after retiring from his sports career.

Steven was a Movie Maniac Since Childhood

The Chicago native had a passion for movies from a very young age. As just a kid who was in 5th grade, he thought that a movie was made by all those actors in frontline and was enamored by their actions and stunts, dialogues and style, and just the beauty of all that glitz and glamour. Little did he know about the hustle and bustle and collaboration of every individual required from those working in front of the cameras to behind the scenes to deliver a simple piece of work.

As he grew up, he aspired to pursue a career in the film industry but didn’t know how to begin with. All he knew was he’s gonna drop some masterpieces and classy work and for that, he needed to attend a directing class to mold his hidden skills and guide his energy in the right direction. Initially, he made some short movies on his own, however, the actual change occurred when he enrolled in a college.

Gradually, he explored a lot of things when he studied at Savanah College of Arts and Design. That’s when he mainly focused on writing and movie making. Going to college was like taking a glance at an encyclopedia for him. He finally graduated with a Bachelor of Arts (BA) degree in cinema and video study.

The movie buff’s filmmaking career started to gear up in January of 2006. He has directed music videos, short films, broadcast commercials, and a bunch of projects in the collaboration with his team in the Chicago Production Industry. To this day, he has earned 4 credits as a director for shows; Briarpatch, The Act, Channel Zero, and the movies Ujka Dzon and Uncle John. His first directorial debut and first time working as a writer were in the movie Uncle John. Later on, the movie bagged a total of 3 awards, and Steven was nominated for Best Director.

Moreover, he was a cinematographer for a documentary; Girl Rising which was a star-studded performance by actors and songstresses. It was like casting directors asking ” How many top-notch actors shall we include?’ and the directors and producers go like “Yes” with a smirk. You name it and the house was full of all top-tier performers. Meryl Streep, Liam Nesson, and Selena Gomez were among many to come together to deliver their A class act.

The documentary was about nine girls from developing countries. Veteran people like Kerry Washington, Cate Blanchett, and Alycia Keys, played the roles of a narrator from Nepal, Haiti, and Cambodia respectively.

Aside from being a cinematographer, he was an additional editor in the documentary and was nominated for Emmy Award as well. Similarly, he has worked as a producer in 3 TV series Briarpatch, The Act, and Nightflyers. He also got his hands on the camera and electrical department in the movie I Melt With You. Also, he’s got special thanks for Wolf Who Cried Boy.

But did you know that Piet met the love of his life, actress Joey King while he was working on one of the aforementioned projects? Let’s find out!

How did Steven Piet meet His Girlfriend Joey King?

The duo first met on the set of Hulu’s popular series based on the real-life story, The Act. Whilst Steven directed 2 episodes and was a producer of the show, Joey performed as the main character, Gypsy Blanchard in it.

The pair remained tight-lipped until the actress surprised the netizens with a Christmas pic of her alongside Steven. In her Instagram post, the couple seemed madly in love by the way they were looking at each other. In addition, Steven is 8 yrs older than her and she was just 19yrs old when she played in the show.

Although Joey announced his relationship with her boyfriend on her Instagram in 2020, the rumors of both dating have been swirling since 2019. Fans were quick to notice when they were initially spotted at the screening of the Harry Potter and The Chamber of Secrets movies. It was casual dating though, as the lovebirds were accompanied by King’s sisters, Hunter and Kelli.

Steven Proposed to Joey King With a Splendid Engagement Ring

As their romance took a step toward a milestone in their relationship, Piet proposed to her wife-to-be with a stunning diamond ring. After 3 yrs of dating, and hide and seek with the media, the couple finally got engaged on 2nd Feb 2022.

Steven and her fiancee King made the announcement following their return from an exotic vacation at the waterfalls of Costa Rica. The Act producer recalled that it was a chilly day and there was no ambiance to set up the mood. And yet it was imperfectly perfect for him.

So, there you go; imperfect is the new perfection! My dear friends. With the start of American Heart Month and the gush of butterflies, Steven wouldn’t have found a perfect season to express his love to his forever valentine. Man! February is a month of love indeed!

Joey Lynn King is an actress who debuted at the age of 4 in the movie Reign Over Me. Likewise, Ramona and Beezus, The Kissing Booth, and The In-Between were some of her career highlights. On the other hand, Life In Pieces, The Flash, and Fargo are some of her shows. She also appeared in the sitcom The Suite Life of Zack and Cody. Well, the 90s kids do remember the show. Isn’t it fellas?

Oh hey! She was in one of Taylor Swift’s music videos as well. In case you might have forgotten, she was the girl who was an outcast and bullied by her friends in Tay’s song Mean.

Furthermore, the young star has starred alongside another superstar and Taylor’s bestie, Selena Gomez in Ramona and Beezus. The Naturally singer was 16 and Joey was 9 yrs old at the time of the filming of the movie. While they played the reel life sisters, they were inseparable in real life too. She was like a sibling which Selena never had.

Is their relationship the same even today? Well if you’re referring to the nonstop laughter and conversation they used to have back in the days, nope. But if you’re talking about love and respect for one another then it’s a full-on yes, at least for King.

Although time grew them apart, Joey admires her one time onscreen big sister. As much as we love our favorite stars and characters to have the exact same bond off cameras, it might be the same for them also. However, they are celebrities and are busy in their own lives and we have to understand that.

Is He on Instagram and Other Social Media Handles?

Steven Piet is available on Instagram and Facebook under his real name. Nevertheless, he is rarely active and has gone silent on Facebook for a while since 2020. On the other, the only social media he is currently active in has 114k followers with 15 posts and the username #stevenpiet on Insta.

As of 2022, Steven’s has amassed a total net worth of $7 million. He has stacked a good fortune from his movie-making career.

On the other hand, his to-be bride, Joey King has a total asset of $4 million. She has accumulated wealth through her work as an actor and executive producer in various films and shows.