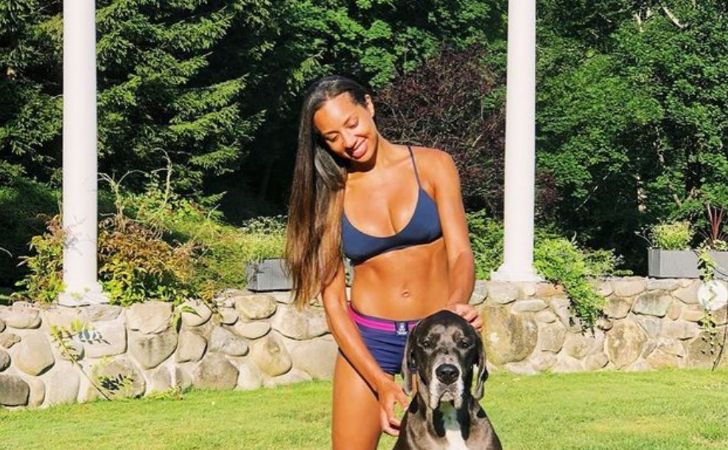 Melanie Hervey is an American actress and Pilates Instructor. She is also famous as the daughter of American singer Vanessa Williams and her first husband Ramon Hervey II.

Though Melanie pursued acting initially appearing in E! True Hollywood Story, she eventually shifted her profession. She is a certified Pilates Instructor and is actively working in the field. Well, how is her life beyond all her professional accomplishments?

Here, we will try to explore every aspect of her career, earnings, love affairs, boyfriend, marriage, and a lot more.

A professional Pilates instructor, Melanie Hervey was born on June 30, 1987, in Los Angeles, California, USA. As of 202s, she is 34 years of age. She is the oldest daughter of Vanessa Williams and Ramon Hervey II.

She did her schooling at a local school in Los Angeles. Melanie who had an inclination toward fashion eventually attended the Fashion Institute of Technology from 2006 to 2008.

Talking about her siblings, Melanie has two biological siblings, a brother Devin Hervey and a sister Jillian Hervey. Likewise, she also has a half-sister Sasha Gabriella Fox, who was born in her mother’s second marriage with Rick Fox.

All her brothers and sister are professionally accomplished. While Jillian is a successful American singer, Sasha is an actress like her. She shares a great relationship with all of them and even makes public appearances together.

Her Movies And TV Works

Melanie is a successful actress and has appeared in a few prominent roles as well. She made her acting debut as a child actress in the 2000 TV movie The Courage to Love. In the movie, she appeared along with her mother and other casts including Gil Bellows, Karen Williams, and others.

Though Melanie began her career as an actor, she eventually decided to rather pursue a career as a pilates instructor. Well, to pursue her career, she received her Comprehensive Pilates Certificate from Erika Bloom Pilates in 2017. Apart from this, she also has licenses and certifications in Myofascial Compression Techniques and True Barre.

After the completion of her training, Melanie began working as a pilates instructor at Club Pilates. There she worked from September 2017 to March 2018. Thereafter from March 2019 to September 2019, she worked as a Studio Director at New York Pilates.

In January 2019, she joined Namaste Wellness as a Pilates and barre instructor. Besides, Melanie is with Equinox since June 2017.

Despite being a recognized face, Melanie has kept her personal life completely away from the media. There are no updates on whether she is married. Also, her social media too in no way hints at her being married.

Since she has not made any claims about her marital status it is better to not make any confirmations on the matter. For now, all we can do is wait until she makes a public statement on his status. Anyway, we would love to see her as a wife someday.

Apparently, she is not dating a boyfriend at present. Also, there are no reports about her love affairs and relationship so far. However, it is highly possible that she is keeping her love life a secret. Well, we hope she speaks up about her boyfriend soon just in case she is dating.