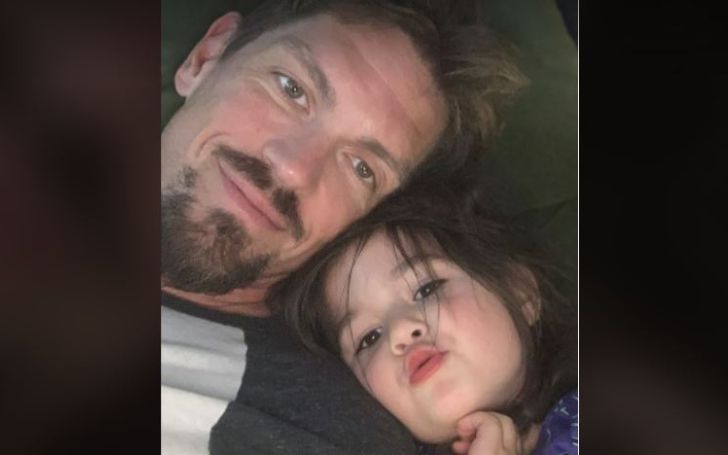 Violet Moon Howey is the daughter of actor, Steve Howey and his ex-wife, Sarah Shahi. Violet’s dad Howey is known for his roles as Van Montgomery on The WB/CW television series Reba, and Kevin Ball on the Showtime series Shameless. While on the other hand her mother, Sarah is also an actress who played Carmen on The L Word in 2005, Kate Reed in the USA Network legal drama Fairly Legal (2011–2012), and Sameen Shaw in the CBS crime drama Person of Interest. Shahi currently plays a lead role in Sex/Life, a Netflix series.

Steve and Shahi’s daughter, Violet although way too young has quite a handful of incidents starting even before her birth worth reading. There are a whole lot of memorable chapters that made headlines, especially with respect to Violet’s arrival and whatever was going on with the life of her parents during that very timeline.

Take a look at those moments; read how Violet’s journey has been as the celebrity child and more in the piece down below.

Violet along with her twin brother, Knox Blue was born in March 2015 at their parents’ home in Sherman Oaks, California. The former is the older twin by two hours.

She also has an older brother, William Wolf who was born in July 2009.

Why Did Sarah Shahi Decide To Have Violet And Her Brother At Home?

Sarah had said during her first baby that the reason she goes for home birth is because of her belief in the body’s natural ability to give birth. She added how by giving at-home birth she wanted to deny the perception that women don’t know how to birth and that they always need doctors and epidurals and Pitocin.

But the one thing that made her and her ex-husband really go for a natural birth was the vision that they had after watching a documentary called The Business of Being Born.

“You have more control during home birth and with hospital births, there is a system in place and we didn’t like the whole system. [Sarah] did not like the idea of being injected with stuff and having a c-section,”

Howey explained to People in Dec 2020. The couple delivered the babies with the aid of a doula, a midwife, and a licensed OB/GYN.

Sarah’s ex though says home births are “not for everybody.” Violet and Knox’s elder brother, William Wolf was also born in at-home water birth.

Right when Sarah was about to know that she was pregnant for the second time, the actress was heading to LA from New York for her acting jobs. When she landed on the west coast, she had a hunch, did a pregnancy test, and additionally thought of seeing a doctor.

So Knox and Violet’s mother, Sarah with her eldest son, Wolf, and her then-husband, Steve visited a doctor to confirm the baby’s news. Shahi said as soon as the doctor put a transducer on her belly, he gave her a shocking facial expression.

said the Spin City actress describing the very moment. After that, Shahi’s physician threw her and her ex a peace sign which, while the latter understood quickly but took a while for the Sex/Life actress to comprehend.

Steve literally got it and jumped so high. I’ve never seen him jump so high. And then he started hyperventilating in the corner,

said Shahi whilst retelling the moment she and his former spouse knew about two babies. It was only after her doctor uttered the word, Twins, that Sarah finally realized what was happening.

Although the labor was quick, Sarah once revealed Violet had a cord wrapped around her neck twice. In a podcast, the mother of three said she was fearful of something like that might happen in advance.

I was in the tub, I was in the zone. Violet came out. You know, how it is it. But she was blue and not breathing. She had a cord wrapped around her neck.

Steve added it was tight around her neck and said that was the moment when he felt like his life was flashing before his eyes.

Shortly after, the ex-couple’s midwife Beth took her and started telling her, “come on baby girl, come on baby girl.” Steve said that however didn’t do anything and Violet was still not responding all the while being blue.

Then the attendee doctor who was then seeing Knox noticed Violet with the midwife and immediately started flicking her feet. The Texas-born actor said after that, his and Sarah’s daughter began changing color and screamed out her first cry.

The Meaning Behind Violet Name

Sarah and Steve’s daughter, the seven-year-old Violet has a bit of story behind her name. Howey in Dec 2020 said while naming their twins was a little easier, he and Shahi went through a bunch of different names before settling on Moon as a middle moniker for Violet.

Howey and Shahi initially were going to name her Moon, but they decided it was better as a middle name. The name Violet came mostly because of their fondness for Ruby and Olive.

Violet’s parents love home birth since the City On A Hill actress gave birth to all of her kids at her home. The ex-couple when together had also been vocal about having a baby at your own residence on numerous occasions. But while doing so, one of their two babies had a rather unusual incoming; feet first. And it was their youngest, Knox, Violet’s twin brother.

In April 2015, Sarah took to her Instagram to announce her breech delivery whilst also explaining that it necessarily doesn’t relate to the c section.

Breech doesn’t not equal c section! I had a breech delivery at home! Be informed,

tweeted the Rookie alum. Reportedly, since Violet came out a bit early, Knox’s birth was relatively easy despite his upside-down position.

What Is The Ethnicity of Violet Mother, Sarah Shahi?

Violet’s mother, Sarah Shahi whose real name is Aahoo Jahansouz has Persian ancestry and is a native of Texas. She adopted her stage name Sarah in second grade after a song she’d heard.

Her mother was a single working parent who taught her resiliency and a strong work ethic. Violet’s mother was also a local pageant competing in competitions as early as 10. In fact, she is also the winner of Miss Fort Worth in 1997.

How Violet And Her Twin Brother Changed Their Actor Parents Lives?

Having Violet, Knox changed everything for Steve Howey and Sarah Shahi. Before their birth, they apparently used to go on vacations all the time, but then suddenly Sarah was pregnant and all their energy was going to the baby.

But when the former couple welcomed twins Violet Moon and Knox Blue, they felt a little more ready for what was in store. Shahi once said she and Howey were “in the trenches together” as they used to establish their routine amidst the infant period of their twins.

Howey, on the other hand, added while it was overwhelming at times, he and Sarah work really hard now to schedule workout time together.

Violet’s parents, Howey and Shahi met when the latter guest-starred on an episode of the former’s show Reba in 2004. They married in Las Vegas in February 2009 after a nearly two-year engagement.

However, by the end of the late 2010s, Sarah and Steve had already separated. They officially parted ways in Jan 2021 after 11 years of marriage.

The actress-mother filed for divorce a year earlier in May, citing irreconcilable differences. They listed April 14 2020 as their date of separation.

After the divorce, the ex-couple jointly said they were grateful for the past 10 years together and proud of the children that they’ve raised. They added their priority was going to remain co-parenting their children with love, mutual respect, and friendship since they were entering into this new phase of their lives.

Following the separation, the Shameless star and the actress shared joint legal and physical custody of their three children. Neither party paid child support, and the exes kept all of their personal possessions, including jewelry, clothing, and furniture.

The reason for the divorce reportedly was their work schedules. Howey had been busy filming the last season of Shameless, while Shahi at the same time starred in various projects, including The Rookie, Persons of Interest, and Sex/Life for Netflix.

In an interview, while explaining the reason behind their divorce, Violet’s father said although in the beginning, all of their time was for each other, once they had the kids, it was really tough for the couple.

He also pointed out how the fact that both he and Sarah – being working actors, they would get very tired, and when they’d come back, if there was any energy left it was for the kids, and not for each other. As for Shahi, she told Oprah Daily that something changed in her after becoming a mom.

She said something happened to her and her ex-husband once they became a parent — they started acting as if those desires that they felt back in the day before having kids had gone. Eventually, they just weren’t adoring each other and the ex-pair realized things weren’t the same.

After her divorce from Howey, Violet’s mother started dating her co-star from Netflix’s “Sex/Life,” Adam Demos in the summer of 2020.

They met on the set of the show, which had started filming in August 2020, just a month after her divorce from Howey went public.

How Rich Is Violet Moon Howey Father Steve Howey; What Is His Net Worth?

The six-foot-four inches tall Steve Howey is certainly rich and while he may not be among the richest TV or movie star, the actor certainly is a millionaire. Celebrity Net Worth reports Violet’s father is estimated to have a net worth of around $2 million.

It is quite apparent that the father of three made most of this wealth through his TV jobs especially from his time at Reba and Shameless more than 100 episode appearances in each. He reportedly made $100,000 an episode for “Shameless” until the series came to an end after 11 seasons (via The Things).

Howey appeared alongside major names for the span of the show’s decade-long run including William H. Macy, and Emmy Rossum, who earned a whopping $350,000 per episode.

What’s more, he is also the owner of the $1.8 million home in Sherman Oaks, CA, a report that was out in the open amidst his divorce settlement with his ex-spouse, Sarah.