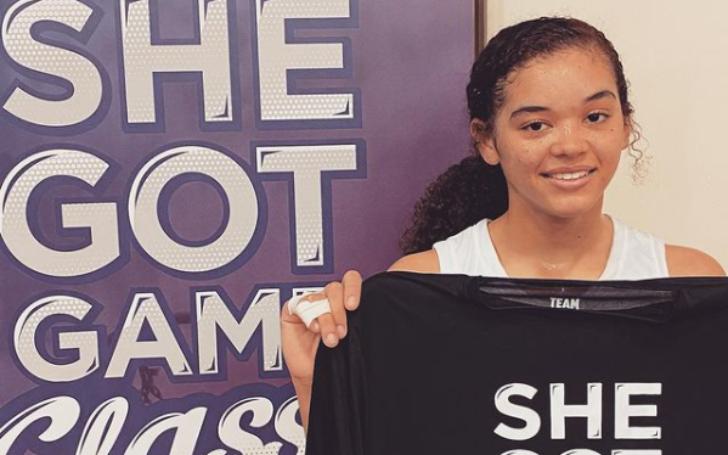 Senali Moss is famed as the daughter of legendary NFL wide receiver, Randy Moss. She is one of five kids Randy shares with his ex-girlfriend, Libby Offutt. Besides, Senali, like her dad and siblings has carved her own way into the sports world.

The beautiful teenager unlike her father has chosen a different field. As opposed to Football, she is an exceptional Basketball player and a big star in the making. Sports do run in the Moss bloodline.

Today let’s take a close look inside the life of Senali Moss and know all the interesting facts including her age, education, early life, and siblings.

Senali was born on March 14, 2004, in the United States. She is the fourth child between retired NFL star Randy Moss and his former partner. Libby. Senali spent the major portion of her life in West Virginia and North Carolina. The star kid belongs to the mixed-race of African-American and White.

Senali is the granddaughter of Randy Pratt and Maxine Moss. Growing up, she used to spend a lot of time at both of her maternal and paternal grandparent’s homes as her father wasn’t around much. Even so, Senali was fortunate enough to spend time with her dad because her older siblings never saw their father until they had become teenagers.

How many siblings does Senali have?

She has four biological siblings, three older and one younger. Her oldest sister and the eldest of the brood is Sydney Moss, born March 6th, 1994. At the time of her birth, her mother Libby was barely 18. Libby revealed in a Facebook post that back when she gave birth to Sydney, she had no idea about her life.

All she wanted was a person who would just love her and stay with her forever. Nevertheless, Sydney is a retired basketball player who currently works as an assistant coach for St. Thomas University’s Women’s basketball team.

A few years after on May 14, 1998, Senali’s second oldest sibling, brother Thaddeau Moss was born. He plays as the Tight-end for the Washington Football Team. Senali’s third oldest, Montigo Moss, was born in June 2002. He is also a Football player like his bro and dad. Aside from her older siblings, Senali also has one younger sister named Sylee Moss.

All five of them are pretty tight with each other. Senali’s older siblings usually share pictures of her on their respective social media handles.

Senali Moss has a few Half-Siblings as well

She has two half-sisters including Lexi Adkins. The identity of Lexi’s biological mom has been kept behind closed doors. She is a Marshall University student who will graduate in the year 2021. Moreover, she is also a cheerleader. Lexi is a recipient of the Yeager Scholarship, the highest scholarship the university awards.

Apart from Lexi, Senali has another half-sister, whom her dad welcomed with his wife, Lydia in March 2014. The name of the youngest of Moss’s children is not known yet. Regardless, Senali is especially close to her. Both of them often appear on their father Randy’s Instagram. What’s more, they also share the same birthday month of March.

Apart from the above two, it seems like Senali has four other half-siblings. The rumors first came to be when Randy, in his 2016 Hall of Fame enrichment speech, called out eleven names, five of them being Senali and her biological siblings, and two of them her known half-siblings.

However, the identity of the other, i.e., Lyric, Little Lourdes, Randy, Teran, and Arianna, is still a big mystery. It is either they are Randy’s children or his nieces and nephews.

Senali is a star Basketball Player

When you come from a family of athletes, it is highly probable that you will also follow the same path. Likewise, Senali is also into sports just like her father and siblings. Just like her sister Sydney, she is also a Basketball player. She plays for the women’s basketball team of South Mecklenburgh High School, Charlotte, North Carolina.

Standing at a height of 5ft 7inches, she is versatile in two positions, Point Guard and Shooting Guard. So for, Senali has played 49 games, as a Freshman and Sophomore. Nonetheless, going her stats, she is turning out to be a standout player just like her family members.

Being a star kid has a lot of perks, especially when it comes to your lifestyle. Senali’s dad Randy has a huge net worth of $25 million. He earned a major portion of his income after playing 14 seasons in the NFL. He currently earns money through his work as a NFL analyst.

Being a multi-millionaire sports star, Randy made sure his kids got the best of the world. All of his children enjoyed a lavish life.