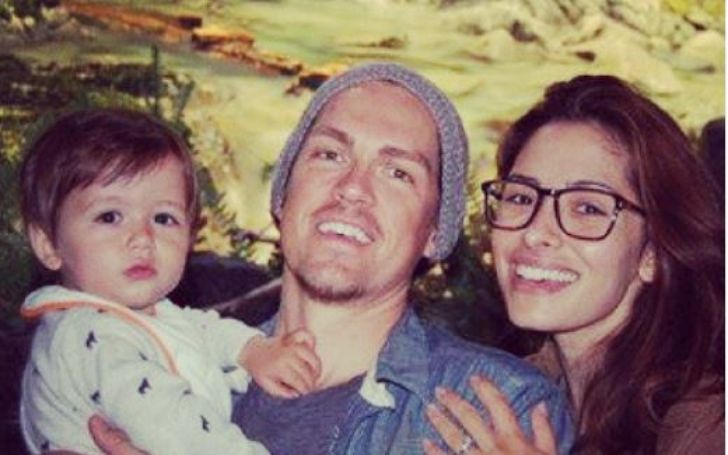 William Wolf Howey is the son of the Shameless actor Steve Howey and his ex-wife, Sarah Shahi, who is also an actress known for playing Carmen on The L Word in 2005, Kate Reed in the USA Network legal drama Fairly Legal (2011–2012), and Sameen Shaw in the CBS crime drama Person of Interest. She at present plays a lead role in Sex/Life, a Netflix series.

Steve and Shahi’s first son, William is now a young adolescent and he has a couple of stories worth journaling. Turns out he was among a few or two media discussions right from his birth.

William added tons of memories to his mother’s life. Take a look at those moments; read about his birth, his growing up, siblings, parents, and more in the headings below.

The first child of Steve and Sarah, William Wolf Howey, who was born in July 2009, is Persian and Spaniard from his mother’s side. The now 12 years old William’s mother, Sarah Shahi whose real name is Aahoo Jahansouz has Persian ancestry and is a native of Texas.

The City on A Hill actress adopted her stage name Sarah in second grade after a song she’d heard. William Wolf’s maternal grandmother was a single working parent who taught Shahi resiliency and a strong work ethic.

Shahi was also a local pageant competing in competitions as early as 10. In fact, Wolf’s mother is also the winner of Miss Fort Worth in 1997. From his father’s side, William is of Scottish, English, and German ancestry.

William Wolf Howey Mother Sarah Shahi Had Him At Home; She Was Calm Even After Her Water Broke

Shahi had her first child at home through a water bath. Though there was no last-minute bag packing or rushing to the hospital for Sarah Shahi when she was about to go into labor.

Instead, after knowing that her water had broken, the actress grabbed her purse and her husband and headed out to enjoy their last day as a pair.

Hours before giving birth to Wolf, Shahi was out having breakfast, and shopping all while having contractions. Shahi says she had a home birth because she really believes in the body’s natural ability to give birth.

She also didn’t want doctors and epidurals and Pitocin while welcoming her child. The Rookie star wanted to have her son in a really loving, peaceful, and warm environment. After having her son, the then-new mom said the entire experience left her with a sense of utter happiness.

Sarah Shahi’s Life After Having William

By the time Wolf was born, it had been some months since his mother, Sarah had started playing some notable roles in the series Facing Kate, the Life and L Word. Shahi described the first few months with baby William as a period full of nervousness and a lot of trial and error.

“In a matter of seconds, you’re handed this life that you’re responsible for, and I was totally nervous. It’s a lot of trial and error. I still feel like a child myself!”

said the Sex/Life actress during an exclusive interview at the family’s LA home on November 11th, 2009. The first few months with baby, William Wolf, were also not as peaceful for Shahi.

She had to be up for him “every 60 to 90 minutes to feed him.” Though Sarah said every time her first son would … do something that would show off a bit of his personality, it was all worth it.

She eventually adjusted to a mom’s life. Describing the then Wolf’s infant period, Shahi said,

“Wolf is delicious. Everything he does is adorable — even his little farts in the bathtub. The tiny little bubbles that come up? They’re so cute! I am such a mom.”

William’s name is mostly because of his actor parents’ passion.

In an interview, Sarah said the reason behind Wolf’s name had something to do with her ex-husband, Steve’s fangs.

“Steve kind of has these fangs. I said, ‘Has anyone ever told you that you look like a wolf?’ I called him Wolfie. So when we were struggling with names, we decided Wolf would be sentimental and meaningful,”

said The Rookie alum while explaining the reason behind her son’s unusual moniker.

William’s siblings, Violet Moon Howey along with her twin brother, Knox Blue Howey were born in March 2015 at their parents’ home in Sherman Oaks, California. The two are also home-born.

Although their labor was quick, Sarah once revealed Violet had a cord wrapped around her neck twice. The mother of three said Violet came out unconscious, blue, and not breathing.

Later, the attendee doctor at home birth after seeing her immediately started flicking her feet, and shortly after William’s sister began changing color and screamed out her first cry.

On the other hand, Wolf’s other sibling and Violet’s twin, Knox had a rather unusual incoming; feet first.

While she is now a mother of three children, Shahi once cringed at the thought of having a baby.

This she confirmed herself during the time she had Wolf. The Texan had actress said,

“I came from a single-parent household. And I had a bad example of what a husband and father could be and how irresponsible a father could be. So because of that, I didn’t want to get married or have kids.”

What Is William Father Steve Howey’s Net Worth?

Wolf’s dad, Steve Howey, according to Celebrity Net Worth, has an estimated net worth of around $2 million.

The six-foot-four-inches tall actor apparently made most of this wealth through his TV jobs especially from his time at Reba and Shameless. He reportedly received around $100k per episode; appearing in more than 100 of them in each of the series.

Also included in his wealth is his $1.8 million home in Sherman Oaks, CA. Having read all the aforesaid amount, it is safe to say Wolf’s father is comfortably a millionaire.

Wolf’s parents, the Shameless actor Howey and the Sex/Life actress Shahi met when the latter guest-starred on an episode of the former’s show Reba in 2004. And after a nearly two-year engagement, they tied the knot in Las Vegas in February 2009.

They, however, parted ways in Jan 2021 after 11 years of marriage and having three kids. The actress-mother of William filed for divorce a year earlier in May, citing irreconcilable differences. After the split, the ex-couple jointly said they were grateful for the past 10 years together and proud of the children that they’ve raised.

They additionally said their priority was going to remain co-parenting their children with love, mutual respect, and friendship. Following the separation, Steve and Shahi shared joint legal and physical custody of their three children.

Why Did Wolf’s Parents Divorce?

The reason for the divorce between Shahi and Howey reportedly was their work schedules. Wolf’s father had been busy filming the last season of Shameless, while Shahi at the same time juggled with projects, including The Rookie, Persons of Interest, and Sex/Life for Netflix.

Shahi said something happened to her and her ex-husband once they became a parent — they started acting as if those desires that they felt back in the day before having kids had gone.

After her divorce from Howey, Shahi started dating her co-star from Netflix’s “Sex/Life,” Adam Demos in the summer of 2020.

They met on the set of the show.