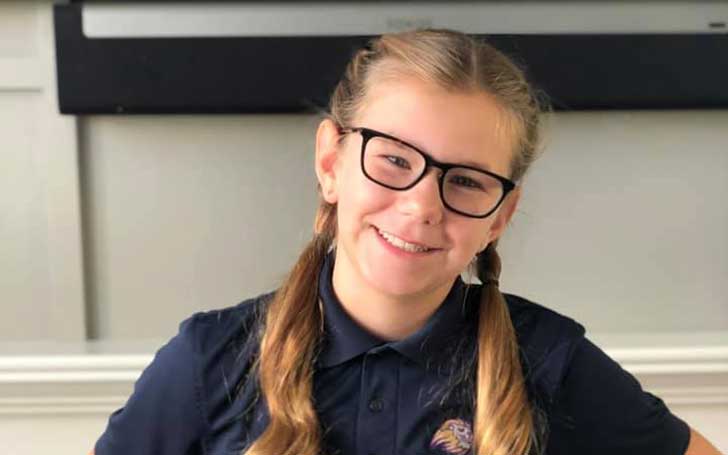 Alanna Marie Orton is an American star kid. She is the daughter of renowned wrestler Randy Orton and his first wife Samantha Orton. Alanna is basically in the media due to her father’s fame. Randy is one of the most celebrated wrestlers in the modern era. The 41-year-old wrestler has also tried his hands in acting.

Being a star kid, Alanna got into the media limelight right after her birth or we can say even before her birth. So, it is obvious that many of Orton’s fans are still curious to know about her.

Here’s everything you need to know about Alanna Marie Orton. Let’s begin!

Alanna Marie Orton was born in St. Louis, Missouri on July 12, 2008. She was born as the first child to wrestler Randy Orton and his ex-spouse, Samantha Speno. Orton, who was 28 at the time he welcomed his first daughter, shared that the newborn was “absolutely flawless from head to toe, and a very content baby.”

As per the records, Alanna weighed 8 lbs, 10 oz. Her parents Randy Orton and Samantha got married on September 21, 2007, and just months after, they announced their pregnancy in December.

Alanna’s parents, Randy Orton and Samantha got married in 2007 and went their separate ways in 2012. The ex-husband-and-wife first met at a bar where Randy was with his friend Mike. Randy and Samantha’s eyes met at one point and they started talking straight away.

They ended up exchanging numbers and then started dating subsequently. Orton recalled his first encounter with Sam during a conversation as,

“Let me tell you how we met. I had just broken my foot wrestling and my friend Mike took me out to a bar. I saw Sam and went over to her and asked for her number. She told me it, and said ‘If you can memorize it, you can call me.’ and the rest is history.”

Later, Randy proposed to his then-girlfriend with a $99k diamond ring in November 2005. Nearly two years later, they exchanged vows in a privately organized wedding. The pair seemed extremely happy as a married couple and were also blessed with a daughter, but within five years, their relationship turned sour.

After parting ways in late 2012, Samantha Speno filed for divorce in March 2013 citing their marriage was “irretrievably broken.”

Her Grandparents Tried to Stop Her Dad From Becoming a Wrestler

Alanna’s father Randy Orton was born in a family of wrestlers. His father Bob Orton Jr. was an acclaimed wrestler. His mother, Alanna’s grandmother, Elaine Orton is a former nurse. Besides, Randy Orton’s grandfather Bob Orton and uncle, Barry Orton both were professional wrestlers.

Being a wrestler himself, Randy’s father Bob Jr. tried to keep his son away from the field. Bob even warned Randy that life in the ring meant a life on the road and away from family,  however, Randy never gave his dream of becoming a wrestler, which ultimately turned out to be the best decision.

Orton is 13 years old as of 2021 and she is attending secondary level. As per her mother, Samantha’s Facebook profile, she is in eighth grade in 2021. However, the name of her school is not revealed. Besides, Alanna plays volleyball. Again, her mother’s Facebook posts reveal Alanna is associated with the St. Louis Crossfire Elite Volleyball Club.

As a matter of fact, Alanna’s team won the Crossfire Super Regional Championship in the Uner-12 category in December 2020. Samantha expressed her content on her daughter’s win through a couple of photos on her Facebook. Here is one of them.

Alanna’s mother frequently shares her daughter’s photos on her socials. We can see her cheering her daughter during her games. Furthermore, back in Sept 2021, the star kid performed at Union Bank & Trust Sports Complex.

Her Father Remarried-She Has a Half-Sister

Shortly after his divorce from his first wife, Samantha, Randy Orton started dating Kimberly Kessler. Kessler was a member of his fan club before they started seeing each other. Not long after, Randy and Kim got married on November 14, 2015.

Kessler and Orton gave birth to their first child together, daughter Brooklyn Rose Orton on November 22, 2016, a little over one year after their nuptials. Brooklyn is the second child for Orton while she is the fourth for Kessler. The family currently resides in St. Charles, Missouri.

As we said earlier, Marie has just turned teenager so it is years from she starts her own career and starts earning. But, on the other hand, her dad, Randy Orton earns well from his career as a WWE wrestler. As per the estimation made by Celebrity Net Worth, Randy Orton has a decent net worth of $7 million in 2021.

At present, Alanna resides with her mother in St. Charles and also often visits her father in St. Louis.