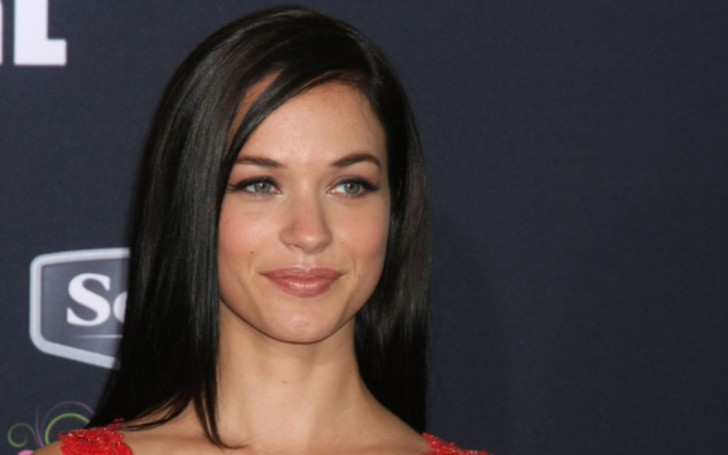 Alexis Knapp is famous for her role as Stacie Konrad in the hit movie, Pitch Perfect. Apart from it, she played in numerous TV series as well. Meanwhile, the actress has been taking care of her only kid, Kai Knapp which she shares with her ex-boyfriend.

Let’s take a look at her personal life, career, and net worth.

Alexis’s father, Bradford Elwood Knapp passed away at the age of 50 due to ‘lung cancer’ back in 2004. By profession, he was a carpenter/outdoorsman.

His death left a big void in her life and the actress misses him a lot. She occasionally shares pictures of him commemorating his death anniversary or birth anniversary.

Besides, Alexis mentioned in many interviews that she relates a lot with guys all because she grew up as a tomboy. This explains why she has more guy friends as opposed to girlfriends.

Alexis was raised alongside her three brothers and no sisters. On the contrary, her father’s obituary maintained he has two daughters, Alexis and her sister, Rio of North Carolina, and two sons,  Zach Knapp, and Joseph Elias Knapp. Her brother, Zach is a surfing instructor at the Outer Banks Surf School.

Now if talk about her third brother then the name Bradford Isaac Knapp comes up. Numerous sites suggest he is her third brother, although the subject is up for debate till now. Incidentally, her dad was married to another woman named, Pam, so maybe her third brother is her half-brother or step-sibling.

From the beginning, Alexis was quite keen on becoming an actress and upon turning 18, she moved to Los Angles from Outer Banks, North Carolina.

She got her first act as a host of the internet video series, Project Lore. In 2010, the actress appeared in the TV series, Look. In the following years, she went on to feature in several TV projects like Family Guy and Super Fun Night.

Furthermore, Alexis portrayed Tori on the Ground Floor (2013-14). She also worked as a model.

What is Alexis Knapp Net Worth?

As of this moment, her net worth is $2.5 million. Alexis made her debut in the industry with the movie, Couples Retreat in 2009.

So far, she has worked in hit movies including Percy Jackson & the Olympians: The Lightning Thief, the Pitch Perfect trilogy.

Alexis is currently single and not dating anyone at the moment. She is happy being a single mother to her daughter, Kai Knapp. She gave birth to Kai on July 1st, 2011.

Alexis shares Kai with her ex-boyfriend, Ryan Phillippe. The couple dated for a few months in 2010 before calling quits. It was after their break-up when Alexis found out she was pregnant with their child.

Her ex-boyfriend has two other kids from his previous marriage with Reese Witherspoon, a girl, Ava Elizabeth Phillippe, and Deacon Rose Phillippe. Some fans are asking whether Phillippe‘s ex Alexis is married or not. Well, she doesn’t have a husband till now.

She was once rumored to be dating Seth McFarlane. Speculations started when she lent her voice in one of the episodes of the Family Guy back in 2013. The pair never confirmed their affair, however.