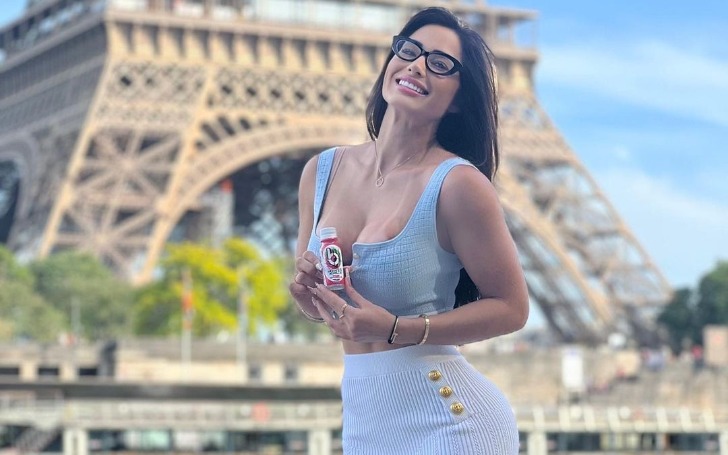 Bru Luccas is a fitness trainer and social media influencer who is famous for her bikini pictures and workout videos which she keeps uploading to her social media account. Aside from that, she is also an entrepreneur who recently launched her own bikini company Body Sisters.

At such a young age, she has already been successful in many ways, thanks to social media. Millions of people followed her on her social media handles like TikTok and Instagram and they are really curious to know about the inside of Bru Luccas’ life.

So, we are here to talk about Bru Luccas. Get to know the information about her early life, sibling, age, boyfriend, and more.

Talking about Bru’s family members, there are no details on her parents but it’s certain that she has a sister named Pietra Luccas. The two sisters are raised together by her parents and apparently, both siblings are in the same profession now.

Besides, Bru belongs to the Caucasian ethnicity and by nationality, she is Brazilian.

Career: Bru Luccas Is A Model And Social Media Influencer

At present, she has a million followers on her social media account which is filled with her bikini photo shoots. And her career as a model started with social media. Bru first went viral in the year 2017 when she shared her photo grilling in a bikini bottom.

After that, the number of followers on her Instagram unexpectedly increased, and so did her popularity. Then, she came in contact with a company called Fashion Nova that started paying for her sponsored post. During COVID-pandemic, she launched her own bikini company titled Body Sisters alongside her sister Pietra. Regarding her successful career, she said,

“I’ve worked very hard to get where I am right now,”

The two sisters are often found together in bikini photoshoots. Prior to becoming a social media influencer and model, she was a waitress at Mcdonald’s.

Bru Is A Fitness Celebrity As Well: What Does She Do?

As mentioned earlier, her fit and curvaceous body which she flaunts wearing a bikini made her popular. Within a year, she became one of the most popular fitness celebrities on Social media. And soon after, many sports and fashion companies included her name in their sponsored posts.

For the fit body, Bru really works hard in the gym. Apart from the gym, she also takes dance classes and jiu-jitsu for her amazing body. And Bru once said that she trains her body just because she is passionate about it, not with the purpose to gain an amazing physique.

Nowadays, people who want to be fit seem to be very conscious of their food intake. There is also a belief that intaking junk food leads to fatness and obesity. But in the case of Bru, it’s different. She never restricts any food groups and eats whatever she likes to eat. While maintaining an amazing figure, she doesn’t hesitate to eat junk food. In this regard, she told,

“People don’t believe that I can eat eight slices of pizza,

“Girls should focus on their own bodies. You should do whatever makes you happy.”

The fitness model got her breast done around 2019. So, people were curious if she had plastic surgery and whether she admitted it or not. So, she decided to talk about it and admitted it by sharing a post on her Instagram in 2019 with a caption,

I keep receiving a lot of question regarding my breast implants. I 🥳 decided to do it 2 years ago and I would do it over and over again. For me, it was very simple specially because I WANTED. Nobody ever said I should do it.

In her post, she, not only accepted getting her breast done but also suggest a good doctor for those who want to do it. Lucas said,

We all have different kind of body so overall, I would strongly recommend you to have a very good doctor because you are dealing with your body and health.

Seeing all this, we can say that the 27-year-old model seems to be very happy with her decision and has no hesitation to admit it in front of her admirer and fans.

Regarding her love life, there is a rumor in the media that the social media personality is dating a man named Aleksey Appollonskiy. Nevertheless, the rumor never got confirmed. When it comes to her personal life, Bru seems to be a little bit secretive. Talking about her, dating a man, there is no such solid confirmation from her side yet.

However, while going through her Instagram, we got to see this man named George Anthony with Bru.

She has shared many posts together with him. And not only Bru but George also keep sharing his moments with Luccas on his social media account. Seeing this, we can assume that Bru may be in a relationship with George. But also we can’t disregard the possibility of them being very good friends. Anything can be possible, either she is in a secret relationship or may be single and more focused on her career right now.

Bru Luccas Is On Social Media

Bru is hugely active on Instagram under the username @bruluccas with a short and sweet intro “I can’t complain but sometimes i still do”. On her Instagram, she has uploaded her bikini photos mostly together with her little sister. Similarly., she also shares some workout videos on her Insta page.

What Is Bru Luccas Net Worth?

As per several online tabloids, she has a net worth of $250k. With her rising model career, she probably is going to add more to her wealth.