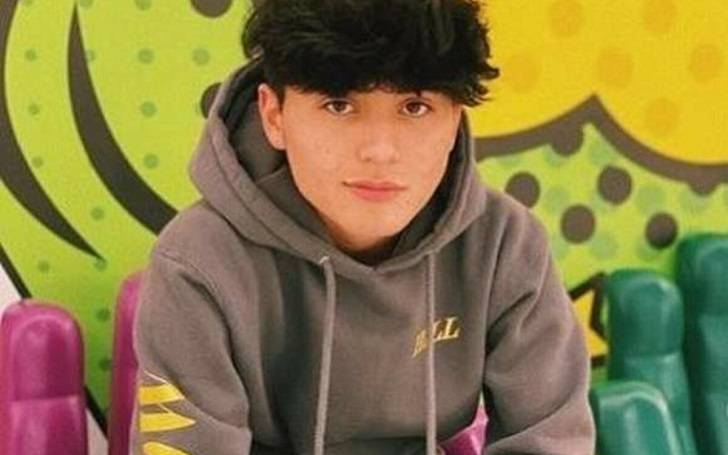 Kairi Cosentino is a public figure who shot to fame through his social media content, especially on TikTok. He became viral for the first time by a video where he was licking a lollipop with a bunch of his friends, which wasn’t even posted from his account as he didn’t have one back then.

Later on, his bestie Mattia Polibio introduced him to the social platform and today he is a well-known social media personality. He is a member of the collaborative TikTok collective Social Demographic Group. He has an association with Talent X Entertainment and he is their client. On the Boys of Summer 2020 tour, he was a headliner. Apart from that, he is a sports enthusiast and quite terrific in soccer as well. Moreover, he is busy with his merch when not creating any videos or posts.

The young star has a great influence on his sister as she has followed in her brother’s footsteps. So, today we are gonna share with you some unknown and untold facts about Kairi Cosentino. Know about his age, height, nationality, parents, sister, girlfriend, and more.

Kairi Cosentino’s Age and Nationality. Is He an Italian?

Currently, the Tiktoker is 19 yrs old and celebrated his birthday a few months ago on the 8th of February this year. The American national was born to Anthony Consentino and Hiromi C. Motonaga in the year 2003 at Little Falls, in New Jersey, USA. In addition to his further birth details, his zodiac sign is Aquarius, and has a cerulean aura that symbolizes radiance, and generosity.

As for his ethnicity is concerned, he has a mixed ethnic background. While his mom is Japanese, his dad belongs of Italian descent. Along with his unique family origin, he has a special name Kairi meaning ocean in Japanese culture.

Kairi was a Soccer Player in High School

During his time at Passaic Valley High School, Cosentino played as a midfielder for his team in his junior year. Back in the days, his team scored a 5-1 win over Hawthorne Christian in the Passaic County Tournament where he struck a goal. The sports fanatic donned jersey number 3. He also played for Match Fit Academy FC.

He is a glowing star who just shines in every field whether it is social networking or sports but what about his academics? Well talking about his education, Kairi graduated in June last year. He was joined by his sister and dad to celebrate his accomplishment which was like the cherry on top!

Like brother like a sister. Kairi’s sister Maiya is a budding TikTok star who is just 5 yrs younger than him. She often posts videos and clips of her dancing and lip-syncs which has increased her popularity. Similarly, she has also performed for For Dancers Only in New Jersey. In addition, she has worked in collaborations with her brother who is already a star on the platform.

Apart from Maiya, Kairi is an elder brother of Ayana as well. Though Maiya is his biological sister, Ayana is his half-sister which pops a question: Are his parents divorced? Let’s find out!

As mentioned above, Kairi’s parents come from 2 different cultures and landscapes which are totally diverse in every aspect. Despite their dissimilarities, his parents Anthony and Hiromi tied the knot and gave birth to 2 children; Kairi and Maiya.

It was all going well with just a family of four in their home sweet home until the things soured between his parents. As per some sources, his parents decided to split up when it didn’t work out well between them. So, what about the kids? Which of their parents did Kairi and his sister stay with?

Moving on, post his parents’ divorce, Kairi and his sis lived with their mom while his old man moved on in his life and married another woman Samal Cosentino. Thus, his half-sister Ayana is from his dad’s side.

Does Kairi Cosentino Have a Girlfriend? Is He Gay?

When it comes to relationship rumors, Kairi’s name has been attached to girls and boys alike. As per some websites and Youtube channels, the 19yr old, secretly dated Emily Nicol (xanaxbarbie69) and Celia Braud, both of whom are social media influencers. However, he got cheated twice and wouldn’t wanna walk down that treacherous path again.

On the contrary, his former girl blamed him for beating her, while the latter accused him of first ending their relationship and whining like a baby when she kissed someone after he broke up with her.

Likewise, many of his fans and netizens were speculating about a thing between him and his buddy Mattia Polibio. Both the social media personalities are close friends and drop posts and pics that are literally suspicious and it’s likely to raise some eyebrows.

But Kairi cleared the air and stated that it was just a bromance and nothing beyond that. Yup! Kairi is a straight guy and not gay who is single but not ready to get into a relationship at the moment. Partly, because he has suffered from heartache twice, and secondly because he wants a break from all the dating and lovey-dovey and just focus on his work.

Nevertheless, the February born is yet to find his perfect valentine, and even if he turns out to be gay or bi in the future it’s ok to be a tad different.

What happened Between Kairi Cosentino and his Alleged Girlfriend Emily?

Actually, Kairi and Ems were in a long-distance relationship. So, to elaborate further, they never really dated. The duo found each other through social networking sites and hadn’t met in person. But when they did, they wished they hadn’t as it was a bummer and turned out to be a blame game. The reason?

Well, they met for the first time in Feb 2020, however, Kairi was quick to take it up to his Insta and called her a cheater the very next day. Following his allegations, Emily too took her stand when it started spreading like a wildfire in the forest.

In response to his post, she disclosed that Kairi hit her. In her defense, she also revealed that a guy kissed her without her consent and Kairi misunderstood her and took the whole situation out of proportion. She stated that she pushed off the guy as soon as it happened but Kairi wouldn’t give her a chance to explain and instead put up the mess on social media for mockery.

For his move, Emily called out Kairi for being reckless and immature when they could’ve settled the matter and dealt with their disagreements off of public attention.

Kairi’s Embarrassing Story and a Clever Answer to a Question

Back when he was in kindergarten, Kairi was a mischievous kid. In one instance, he stuffed his nose with a noodle thinking it would be fun but ended up in trouble instead. It was a school project and the noodle got stuck in his nose. As a kid, he panicked and started crying, he didn’t know how to blow his nose either so, he was taken to the nurse. And the worst or hilarious part is that his crush was with him at the time. Later, he sneezed when he reached home and the stuff got out finally.

In a Q&A segment with Famous Birthdays, he was asked what superpower he would choose to have? To which, he replied stopping time, so, that he could cherish the amazing moment and pause time whenever he wanted. He further added that it would be handy in robbing a bank and attending a test. Pretty dope but witty isn’t it? So, what about you? What superpower would you choose or do you too want to be Doctor Strange?

Kairi Cosentino Has A Merch Store

The 19 yrs old seems to be proactive when it comes to creativity and finances. At a young age, Cosentino not only has become successful on social platforms but has also introduced a handful of products in online stores. He has a variety of merch such as stainless water bottles, tee-shirts, sweaters, joggers, hats, and duffle bags.

Previously, he used to sell those merchandise through his online shopping site shopkairi.com. However, the site has either been removed or isn’t working right now. But no worries! Kairi has come up with another site and you can check out his products here https://kairimerch.com/

With 1.9 million followers on TikTok, Kairi is available on other platforms as well. He joined Instagram in 2019, under the username #kairicosentino and is active on Twitch too. He has a Youtube channel kairi cosentino with 87.6 k subscribers where most of his videos are Q&A. There are videos of his soccer highlights and him reading some fanfics of Wattpad with his friends Mattia and Robert.

In addition, he is on Twitter and Snapchat as well. His Snapchat Id is kairi_46.

Coming to his net worth, Kairi has racked up a handsome amount of $300k worth of fortune. While a huge portion of his total assets is accumulated from his social media presence the remaining half comes from his online business.

At the age of 19, he has already become a celebrity, got his own business, and is good at sports. At this rate, it’s no wonder if he comes up with more new ideas and makes 7 figure cash flow.