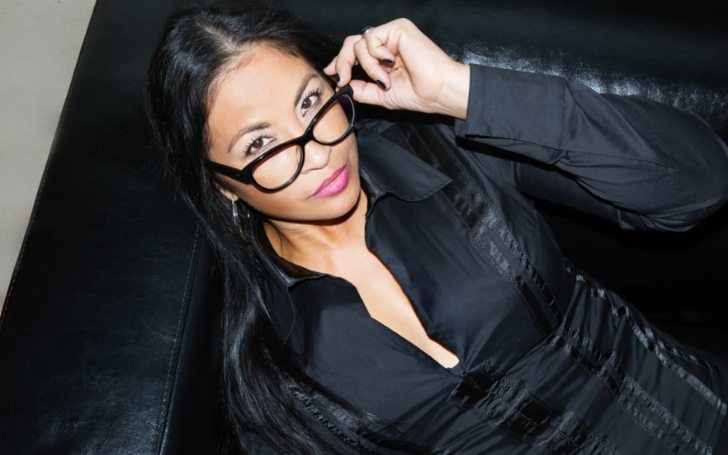 Darlene Ortiz is an American actress, model, composer, author, and radio host who rose to prominence as the first cover girl of rap after she was featured in the music album Rhyme Pays and Power. But, she is notably recognized for being the ex-partner of an American rapper, songwriter, actor, and producer Ice-T (aka Tracy Lauren Marrow).

Talking about her relationship with Ice-T, she was with him for almost 17 years but the two never got married. The two end their togetherness in 2001 and with her boyfriend of 17 years, Darlene even shares a son named Tracy Marrow Jr. So, what is her relationship status at present?

Today, in this article, we will talk about every personal and professional detail of Ice-T’s ex-girlfriend Darlene Ortiz, from her early life to her relationship with a rapper and her post-break-up life. Have a closer look.

Darlene Ortiz’s Birthday: She Had A Rough Childhood

As of 2022, Darlene is  55 years of age. She was born as the youngest child to her mother Rose and Father Pete on February 27, 1967, in Mexico, North America. She spent her childhood in the most tumultuous atmosphere as both of her parents were alcoholics.

While growing up, she didn’t get any affectionate family environment. With this, she grew up hating her own mother. Ortiz even tried to fire her mom’s bed so as to escape from her shadow, She said,

She (her mother)  wasn’t even supposed to be there. That’s because after that it was like, I have to live with this woman. She was receiving my child support, and she wasn’t gonna let me leave. I had to stay with her ’cause I was underage.

Due to bad treatment from her mother, all her older siblings left the house at a very young age. According to her, she was the last one who lived at home for a longer time. She once said,

All my sisters had run away while I was really young. The last one, the one I was close to, she ran away when she was 14. She’s been on her own since then, and I was the one who stayed home the longest.

Even though she suffered a rough time living with her mommy, later her paternal family raised her with love and all support she needed in the meantime.

Besides, a Pisces woman is of African-American and Hispanic descent and holds American nationality.

Darlene Ortiz Was Raised By Her Grandmother: She Was Close To Her Father

As we said earlier, she never had a good relationship with her mom, So, whatever love and support she gained in her early life, everything was from her dad and his family.

My dad’s family are the people that really truly raised me, and they were always so loving and kind.

On the occasion of mother’s day on May 9, 2021, she dedicated the post to her beloved grandma and wrote,

If it weren’t for this amazing woman, my grandma Connie Ortiz (may she be resting her caring hands and heart) And her first born, my papa Pete, Lord knows where I would’ve ended up. Happy Mother’s Day In heaven and to all those loving moms and grandmothers who’ve passed. She was caring for her granddaughter.

Man I miss this woman. Cherish you’re loved ones and no matter how old they get, spend as much quality time with them. I’m so glad I have SO many wonderful memories with her. She just loved her Anaheim Angels and we had such a great time at the games. I can’t thank her and my Papa enough.

Now, coming up to 2022, her grandmother is no more in the world. Similarly, Darlene greatly admired her father for whatever he did for her despite being an alcoholic.

Darlene Ortiz Started Off As A Model: Her Career Detail

As a professional, she began her career as a model for her former boyfriend’s hip-hop music album Rhyme Pays and Power. With her bold appearance as a cover girl for a music album, she cemented her status as a Hip-Hop star and is known as the first cover girl of rap. With this, she then played other several music videos.

As of 2022, she has tried her hands at other professions too. Ortiz is a radio personality. Darlene co-hosts the radio program The 5150 show Foxxhole broadcasting company Sirius XM alongside Corey Holcomb. Further, as per her social media account, she is also a Group Ex-Instructor, songwriter, Fitness Instructor, and PT trainer.

She Is An Author As Well

Darlene evolved as an author in the year 2015 when her book Definition of Down: My Life with Ice T & the Birth of Hip Hop was published on August 31, 2015. She co-authored this book alongside the Emmy Award Winning producer and author Heidi Cuda.

Her co-authored book Definition of Down has talked about how hip-hop started in the era of the 80s and the book also has shared a story of Rap beef in the beginning period of rap, especially about LL Cool J rivalry. Similarly, her co-written book also narrated intimate glimpses of daily life. The book is now available on Amazon at a cost of $9.99.

Darlene Ortiz Was A Partner To Her Boyfriend Ice-T For 17 Years; They Were Never Married

Darlene stayed in a live-in relationship with her ex-boyfriend Ice- T for almost 17 years. The couple for the first time met at the Radiotron club in Los Angeles in 1984. In the meantime, the movie Breakin’ was filmed at the club and her former partner was in the spot to play the role of Rap Talker and Darlene was also there at the same time.

At that point, the two strangers came in contact, and soon after they began dating each other. After being in a relationship, Ortiz even helped Ice-T in establishing his music career and stood by her now ex-boyfriend in the crucial stage of his career. But, as time passed, the spark in their relationship started to fade and in the year 2001, the couple finally ended their togetherness after 17 years.

Does Darlene Have Regret On The Separation From Ice-T? What Was The Reason?

Coming up to 2022, it has already been 21 years since Darlene parted ways from the American rapper and actor. It seems at present, she is living her life fully. Talking about whether she regretted parting ways with Ice-T, it doesn’t seem like that.

Back in 2015, when her book was released, she talked about her relationship with her former partner. She said,

I’m disappointed highly of how it ended and how we chose to end it. I’m very disappointed, but at the same time, how can I be mad at him? All these exciting things happened because of him. I met him and supported him, and he is still my son’s dad. There’s no way it can ever really get ugly.

From this statement, we can say that Darlene is not stuck in regret kind of things, and both of them have already moved on after so many years.

No, Darlene is not married to anybody and going through her social media account, it doesn’t seem like she is dating any man. Rather, it seems Ortiz is fully enjoying her single life and her career.

On the other side, her ex-boyfriend of 17 years is now married to an American actress and TV personality Coco Austin. Ice-T married his now-wife Austin just a year after a breakup with Darlene.

Darlene Ortiz Shares A Son With Her Former Partner, Ice-T

From her relationship, she gave birth to a son named Tracy Marrow Jr. on the 23rd of November 1991. As of 2022, Darlene’s only son, Tracy is 31 years of age. He followed in the footsteps of his father and joined his band Body Count in 2017. Today, he has already made his name as a rapper, actor, and record producer.

Likewise, Ortiz’s son is the lyricist and the producer of the tracks of the 6th album of the band named Bloodlust. He is also known for his remarkable work in the 2020 album Carnivore.

Is Tracy The Only Child Of His Parents?

Tracy is the only son of his mother Darlene but not of his father. Besides him, his daddy has two other daughters named LaTesha Marrow and Chanel Nicole Marrow.

Ortiz Is An Animal Lover

If you go through her Instagram, you can absolutely say how much she admires animals. Darlene keeps posting about animal prevention on her social media account. On September 2, 2022, she shared a post of Smokey bear in which there was written ” Only You Can Prevent Wildfires”.

Apart from that, all her life, she grew up having a dog in her family due to which she is more titled towards animals, especially dogs. On National Dog Day on August 26, she by sharing her images with her dog, Darlene captioned,

YES, it’s National Dog Day and here’s just a few snippets of some (I don’t have photos of all of them and there have been many) that have given me their unconditional love Thru out my life time, thank GOD for dogs 🙏🏽

She is hugely active on Instagram under the username darleneog_ortiz in which she keeps sharing her personal and professional life.  For extra, she also shares some quotes regarding her thoughts, state of mind, and even her star sign. Further, she is also on Facebook which goes by her own name.

Moreover, Darlene is on Twitter under the username @DarleneOGOrtiz with an intro “Fitness Instructor, PT trainer, radio cohost, songwriter, A down ass BGirl for life, Author (Definition of Down) and proud Minimalist”. Her Twitter account also states that she is currently living in Los Angeles, California. She has also provided her cameo link on her Twitter.

What Is Darlene Ortiz’s Net Worth?

She has been a working woman since she was very young, at the age of 17. Moreover, Darlene is in multiple professions. As a result, her estimated net worth is $1 million as per several media sources. On the other hand, her former partner has a fortune of $65 million as of 2022.