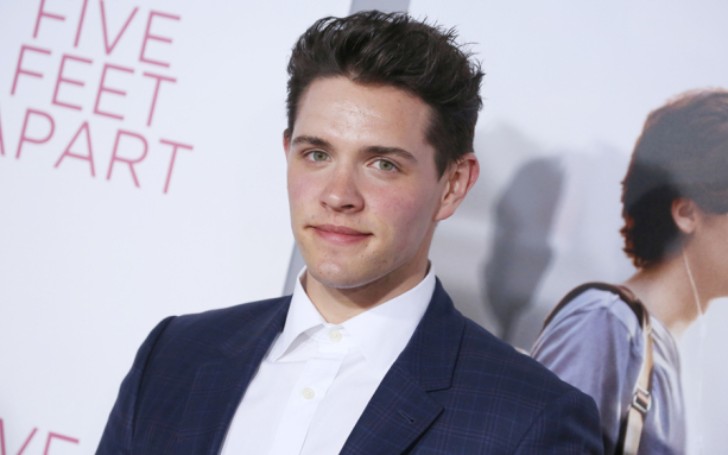 Ever since Casey Cott played the role of Kevin Keller in Riverdale, there’s been a lot of buzz regarding his sexuality. After all, he enacted the gay role with perfection which is bound to raise some eyebrows.

However, it looks like Casey himself contradicts the above statement. He’s been sharing pictures with a mysterious lady who fans are claiming might just be his girlfriend. So who is Casey Cott’s girlfriend in 2021?

Let’s try to find out about his current relationship status.

Who is Casey Cott Dating in 2021? He is engaged

Sorry to say, ladies, Casey is already booked. Yes, you read it right, the American actor is dating. But wait, there’s more, not only is he dating her but the duo is happily engaged as well. Casey proposed to this girlfriend in December 2020. After getting engaged, he shared a beautiful picture with his fiance wherein she is showing off the big rock.

Back when he first started sharing pictures with his girlfriend, many of his fans thought she might just be an acquaintance of his and nothing else, but, later on, more snaps came. What really sent the internet into a frenzy is when he added a picture in which the girl is kissing him.

Furthermore, he shared yet another picture with her in December 2019, right around Thanksgiving. Both of them wore matching leather jackets and the caption stated, “Leather thanksgiving.”

Who is Casey Cott’s Girlfriend? Her identity is still behind doors

As of this moment, Casey has not come forward with the identity of his rumored lover. What’s more, all of this can just be speculation as for all we know, she might just be a close friend of Casey.

Besides, we can see all over the comment section, fans asking him for the Instagram account of the lady. Unfortunately, no one except Casey knows who she is and we sure hope he reveals her identity soon.

Casey & Stephanie Styles: Their love story at a glance

Even though Casey likes to keep his personal life behind closed doors, a few years back he had a very public romance.

Around 2017, Casey was reportedly in a relationship with actress, Stephanie Styles. Steph is famous for her work in Booksmart and Bonding.

Their romance initially came to light after they were spotted together multiple times in several events. Moreover, Casey used to share photos with her on his social media handle.

From attending Broadway shows to wishing each other on Valentine’s Day, the lovebirds didn’t miss any chance to show their affection.

However, their relationship broke down somewhere down the line due to an undisclosed reason.

Apart from Stephanie, Casey was also linked with the singer and actress, Sabrina Carpenter. Rumors of their affair first came to media prominence after they shot a video song together. Casey played Sabrina’s love interest in her song, Why.

The chemistry between the two was evident in the music video. But the duo’s relationship didn’t move further than friendship. In an interview with Zach Sang, Sabrina also mentioned Casey’s girlfriend and how she hit it off with her.

“He’s got a wonderful girlfriend. We hit it off, first day. He just made everything so easy and comfortable.”

At the time, he was linked with Stephanie, so it is safe to say they were an item.

What about Casey Cott Gay Rumors? Details on his Sexuality

We all know this was coming and today we’re here to address all the speculations regarding Casey’s sexuality. As we mentioned earlier, since playing the role of an openly gay character in Riverdale, tabloids alike are all jumping into the Casey Cott gay rumors.

Moreover, Casey’s social media handle is full of comments wherein the fandom often asks him about his sexual orientation. When the 27-year-old Michigan native added the picture with a girl, everything turned upside down.

In the Instagram posts with the lady, one fan asked, “Wait dumb question is he bi or just a great actor for acting a gay role?” while another one chimed in, “For me you are Kevin so for me you are gay forever❤😅 but wish u all the good things.”

Guys we need to understand that if a person plays a gay role it necessarily doesn’t mean he is gay in real life as well.

Take, for example, Cameron Monaghan, who played an exceptional role as a gay man in Shameless, yet he had a girlfriend in real life.

There are many examples like this so we should stop jumping our guns, take a step back, and let the actors divulge their sexuality.