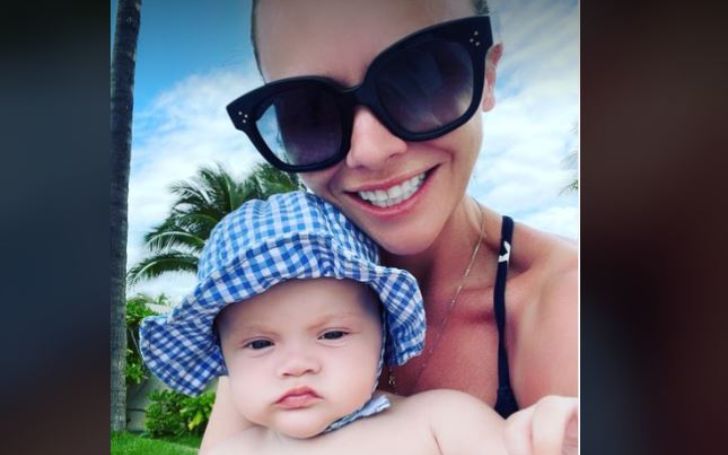 Cleopatra Ricci Hampton is the daughter of Californian actress, Christina Ricci, and her current husband. Cleopatra’s actress mother, Ricci is known for films including The Addams Family, Casper, Monster, Sleepy Hollow, and Penelope among others.

The Addams Family actress, Ricci isn’t among the celebrity who prefers to shroud her kids with privacy. She in fact, never misses the chance to show her fans how her children are growing up including her infant daughter, Cleopatra. Ricci often shares pictures of her daughter, Cleopatra on her Instagram. The actress even refers to her as mini-me.

Ricci’s daughter, Cleopatra’s face is becoming more and more apparent to the outsider thanks to her parents sharing their daughter’s pictures on each of their Instagrams. Despite the very young age, Cleopatra has also graced the covers of several magazines. The Casper actress and her spouse have often come across as parents who just can’t seem to help but show off their daughter. Read further to know how the infant is growing up in addition to other facts regarding her birth, parents, and more.

Christina Ricci’s second child, daughter Cleopatra was born on Dec 8, 2021. The now 42 years old Christina and her current partner, Mark Hampton first announced the news of Cleopatra’s birth on Dec 28, 2021, via Instagram. Sharing a video of the newborn resting in a hospital bassinet, the Addams family captioned,

We are so in love with her. Also, she has the most incredible dad imaginable @markhamptonhair

The same day, Cleopatra’s father, Mark also shared his excitement through his own Instagram. The Englishman shared a picture of his then-newborn daughter in a blanket alongside a caption that read,

My heart has exploded. @riccigrams and baby Cleo are doing fantastic, we’re all resting after such an eventful morning. Welcome to the world baby Cleopatra Ricci Hampton.

Ricci and Hampton first shared the news of their upcoming baby girl in Aug 2021. The former shared a photo of her ultrasound alongside a series of party and heart emojis as well as a caption that said,

Cleopatra Ricci Hampton Has An Elder Half Brother

Cleopatra also has an elder half-brother, Freddie Heerdegen born through her mother’s past marriage.

Ricci gave birth to Freddie with her ex-husband James Heerdegen. Christina when announcing the pregnancy of Cleopatra revealed her son, Freddie had wanted to be a brother for a very long time.

Christina’s husband changed their daughter’s name without her permission

Christina, now age 42, in an interview with Ellen Degeneres in Jan 2022 revealed she and her husband decided on their little girl’s name. Ricci said while Cleopatra was the name that they both liked, in the beginning, the actress had thought of just holding it for a while before going official with it.

However, according to the Monster actress, her husband Hampton, being excited with the name ended up putting it on Instagram. After that, Ricci said the media picked it up and before she realized it, her daughter’s name was Cleopatra. Christina told Ellen her husband went with the name while she was still recovering from childbirth.

While Cleopatra is British from her father, Hampton’s side, maternally she has quite a story in regards to that. Although her actress mother, Ricci has been considered predominantly Italian, only part of it is true. In an interview, speaking of her ancestry, Christina said the Italian ethnicity in her finished five or four generations ago.

She said the last Italian in her lineage married an Irish woman and the couple had kids but they were all boys. The kids later married more Irish women and that, Ricci says continued for several generations and by the time Christina was born, she was basically Scots Irish.

Cleopatra Ricci Hampton Parents; Who Is Her Father And Christina Ricci’s Husband?

Both of Cleopatra’s parents, Ricci and Hampton are in the showbiz career. While most people know Ricci, her husband Mark has been involved mostly with behind-the-scenes tasks. Cleopatra’s father, Mark is a hairstylist as well as a make-up artist from England.

Ricci and Hampton married in Oct 2021.

Two months after the wedding, the couple welcomed their first child, a daughter and it was Christina.

Before Hampton, Ricci was married to James Heerdegen, a film producer of films including Birdman, After Earth, and others.

Christina Ricci Sufferred Physical And Mental Abuse From Her Ex-Husband

Ricci and her now former husband, Heerdegen married in 2013 and divorced in 2020. Christina and James met in 2011 when they were both working on the short-lived television series Pan Am. When together, they welcomed a son named Freddie in 2014.

The Sleepy Hollow actress had a rather messy separation from Heerdegen. During the divorce filing in July 2020, Ricci accused Heerdegen of physical and emotional abuse.

The Santa Monica-born actress later consequently also got a domestic violence restraining order against her ex-husband. Amid James and Ricci’s marriage fallout, the two fought a custody battle for their son, Freddie. In the aftermath, Christina got full guardianship while her former husband James got visitation rights.

Ricci in an interview said her daughter, Cleopatra is already sleep-trained. She once talked about her daughter going easily to sleep as soon as she is put down in the crib. On the other hand, Ricci revealed her eight-year-old son, Freddie still sleeps with her and said that she finds the contrast amazing.

Christina admitted to having struggled when trying to sleep train, Freddie. The actress said her son would scream and start banging his head against the crib railing. But with her daughter, Christina said, the little girl only sort of whined for about seven minutes and ”then laid down, clutched her little unicorn, and went to sleep.”