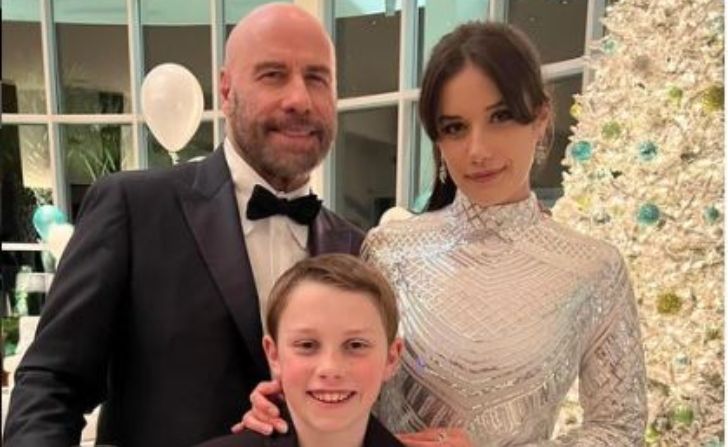 Benjamin Travolta is the son of actor John Travolta and his late wife Kelly Preston. Ben’s father is known for films like Carrie, Saturday Night Fever, Grease, and Urban Cowboy. John is also famous for other hits like Pulp Fiction, Get Shorty, Broken Arrow, Phenomenon, Face/Off, A Civil Action, Primary Colors, Hairspray, & others.

Benjamin’s mother, Kelly Preston, on the other hand, was also a well-known actress who had roles in films like Mischief, Twins, Jerry Maguire, and For Love of the Game. After Preston’s death, Travolta is continuing to be in a full-dad mode to Benjamin and his elder sister. The Academy nominee did a great job of making sure both of his kids feel loved and supported during their mother’s passing.

Travolta’s social media posts often reveal how he has been spending some extra one-on-one time with his son, Benjamin, and his daughter. The family, who are still reeling from the death of matriarch Kelly Preston in July 2020 are holding each other close.

But apparently, John is seen more having a good time with his son, Benjamin. Over the years, he has shared some incredibly touching selfies with his youngest. The actor-father cannot resist posting photos with his children. Benjamin has also walked alongside his father on several red carpets. Down lies some more insight into the life of Benjamin Travolta as the child of a famous Hollywood couple; his unusual birth setting, how he took the death of his mother, his bond with his father, and more.

The now 11-year-old Benjamin weighed 8lb 3oz during the time of his birth at an undisclosed hospital in Florida. Sometime after the birth, Benjamin’s father and mother to People said,

“It’s impossible to keep a secret …, especially one as wonderful as this. He’s given the house a renewed spirit and purpose.”

Travolta and Preston had tried for Ben for three years, so it was a bit of a surprise for the couple when they found out about the pregnancy.

Both Travolta and Preston were Scientologists, and they incorporated some of those practices in the delivery room, where Benjamin was born by C-section.

Preston sometime after the delivery had said,

“We had a silent birth, with no spoken words as much as possible that was performed in a calm and caring environment.”

Kelly’s pregnancy with baby Ben, though, was one of the important fodders for the media, owing to the mass-media fascination with the Scientology approach to quiet birth, or “silent birth“.

Preston had spoken out on the controversial religion Scientology’s practice of silent birth. The SpaceCamp actress at the time revealed she wasn’t to speak during labor with baby son Benjamin. She apparently liked this practice of Scientology’s strict birthing rules and claimed it left her children ‘calm and peaceful.’

Telling how she was forbidden to talk during labor, Kelly revealed — religion teaches that noise during birth can affect children in later life.

In an interview with America’s Today Show in Jan 2011, the Honululu-born actress while speaking out on the common Scientology practice, claimed that the rules had worked for her children.

Ben’s parents, Travolta, and the Sky High actress Preston met through the Scientology Church. They married in 1991 and welcomed their firstborn, Jett shortly after in 1992. For eight years, Jett was the pair’s sole pride and joy. Then in April 2000, they had another child, a daughter named Ella. T

Much like her father, Ella, too, is in the acting business. At the age of 9, Ben’s sister, Ella was already acting in her first movie. Preston and Travolta’s daughter appeared alongside late icon Robin Williams in the 2009 film Old Dogs. She also played Becky Hunt in the 2019 John’s movie The Poison Rose.

She additionally has credit in the live-action reimagining of Alice in Wonderland called Get Lost.

Benjamin’s mother, Kelly Preston died on July 12, 2020. She lost her life at the age of 57 at her home in Clearwater, Florida, two years after she knew about her breast cancer surgery.

She, though, would ultimately lose the battle and her husband and daughter later announced her passing through their respective Instagram handles.

How John Travolta Talked About Death To Benjamin After His Mother Died?

In the summer 2021 episode of Kevin Hart’s Peacock talk show Hart to Heart, the now 68-year-old actor told the comedian host that son Ben told him he feared he would lose him too after his mom passed away. On the show, Travolta reported his son saying to him,

‘Because Mom passed away, I’m afraid you’re going to.’

To this John, also the brother of screenwriter, Sam Travolta, replied,

The Phenomenon star reminded him how his brother left at 16 whilst he was too young and his mother at 57 who also was too young.

Travolta said he told his son. John additionally told the host Kevin that he said to his son during their chat, “I could die tomorrow. You could. Anybody can.”

He then gave Ben some advice, telling him death is a part of life and one doesn’t know exactly when it’s going to happen. The Golden Globe winner suggested his son do his best at trying to live the longest he can.

Kelly and John’s eldest child and Ben’s elder brother, Jett Travolta, died in 2009 while on vacation with his family in the Bahamas. Police later reported the boy died after hitting his head on a bathtub and said it was a seizure that primarily led to his death.

Jett was 16 at the time and was autistic.

“[He] was autistic. He had seizures, and when he was very young, he had Kawasaki syndrome,”

Jett’s mother later said about her first son on the CBS daytime series The Doctors in 2012. The Twins star further said that autism and seizures very likely contributed to Jett’s death.

She also talked about her late son’s Kawasaki syndrome which she believed might have resulted from her “fast and hard” labor, and the use of antibiotics while breastfeeding Jett. Ben’s mother said Jett had also contracted an infection of Candida yeast, which some studies have linked with the symptoms of autism.

After Jett died, Preston and her husband established the Jett Travolta Foundation to help children from a variety of disadvantaged backgrounds.

While Travolta and Kelly’s family experienced immense pain when Jett passed away, the couple later said Benjamin’s birth brought life to their home and helped the family reunite.

The family had also suffered additional heartbreak in May 2010 when two of their dogs died in an accident at an airport in Maine. John while talking to Good Morning America in 2016, said his family certainly bonded together after having little Ben following a tremendous loss.

In March 2022, during a farewell to the late “Golden Girls” actress Betty White, John’s then 11-year-old son, Ben Travolta adopted the late actress puppy that initially appeared on stage with Jamie Lee Curtis.

White’s puppy Mac and Cheese was put up for adoption as part of the memorial to the actress, who died in December 2021 at 99.

While announcing the adoption, Curtis snuggling up with the dog on stage said the greatest gift ‘you could give Betty White is to open your heart and your home and adopt a rescue dog just like Mac and Cheese from Paw Works.’

Later it was Ben who adopted the pooch and afterward the sharing the photo proof on his father’s Instagram.

Benjamin Travolta Is Into Gymnastics And Tennis

Ben apparently is also into gymnastics, tennis, fishing, and the computer world. John revealed this to People in August 2019. In addition to being outdoors, Ben reportedly is also into dancing and entertaining. In fact, his actor father has shared a few videos of the two performing on TikTok.