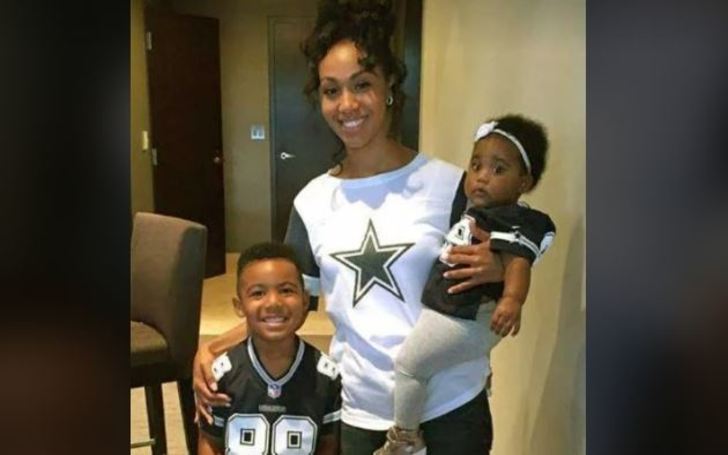 Ilyne Nash is the girlfriend of Dez Bryant, a former wide receiver at Dallas Cowboys of the National Football League. Nash and Bryant started their relationship in the early 2010s and within a few years became parents to more than one child.

As happens with most sports couples, Nash and Bryant also managed to get their share of publicity, controversy, or otherwise. The couple entangled themselves through issues such as affairs and domestic abuses as well as parenthood.

However, as of the present, the two have hardly appeared by each other’s side. For outsiders, it may even look like that Ilyne and Desmond were never a thing in the first place. So what’s the real deal; know in the article below.

Ilyne Nash Is Originally From Texas

Ilyne Nash fully, Ilyne Racquel Nash was born on July 26, 1987, in Killeen, Texas, a city which is about 70 miles from north of Austin. She is the daughter of Roosevelt Nash Jr and Kyong Lee Nash.

She is also a former student at the University Of Texas at Austin where she pursued a Bachelor of Science in Communication Sciences graduating in 2013.

Ilyne has a BA degree in Speech-Language Pathology. She got her graduation in the presence of her partner, Dez Bryant, and her son, Dez Jr. Bryant, or per some reports, King Legend Bryant.

Professionally, the brunette is a speech therapist assistant at Kidz Therapeze.

Speculatively, she comes from a family having a strong faith in Christianity. On her private Instagram, she has described herself as the “lover and follower of Christ.”

Ilyne and Dez have reportedly been together for years. Reports of their dating started to emerge in 2010.

Despite being the parents of two, they never revealed whether they were husband and wife or just partners. Nor did they share any images that were anywhere as close to a wedding.

Nash’s husband, Bryant is also father to another son Zayne, born in 2007, from his previous relationship.

Also, there were rumors claiming her spouse had a relationship with Miami rapper Trina. But the singer, later, herself denied those stories.

Dez Bryant Dated Another Girl And Ilyne In Tandem

In the past, when the former Cowboys 88 was dating Ilyne Nash, he was also having an affair with Briana Hooks in unison.

It was back in 2013. Dez’s affair with Hooks became known after the pictures of Dez and Hooks appeared on the latter’s Twitter account.

Similar to Nash, Briana Andree Hooks was also a Texan, from Dallas, Texas. She was a graduate of the University of North Texas.

In July 2011, Ilyne Nash and her partner, Dez Bryant made headlines for their yet-to-be-solved Wal Mart parking lot incident.

For some time after the event, it had been the talk of the NFL world.

That month, someone called 911 from the Wal-Mart in Lancaster, Texas reporting some black man dragged a woman from one car to another in the parking lot. The woman as per the caller was Ilyne Nash.

The father of Nash’s children, Bryant was one of several people police talked to after getting a call of a “disturbance” in the parking lot.

What Police Found After Interrogating All The People Involved

After interviewing all the suspects, the officer, however, determined that there was no offense, and everyone was let go.

Yet, a security guard told the officer that at the time when it all happened he did go to the scene but he saw no one and the only car was a white Mercedes with the door open.

Later investigation revealed the vehicle was under the name of Bryant. The guard, however, reported after he arrived, two men showed up in a black Escalade also belonging to 2010 round one draftee officially.

Later, when the investigators asked those men, Carl King, and Christopher Mitchell, they said Nash had called them and asked them to pick up her car.

What Ilyne Nash Said Happened To Her

When police finally asked Nash about what had happed she initially told – she had gotten into an argument with a man named Alex Penson.

The Texan partner of Bryant further reported to the officials that she left the parking lot with Penson and then on the way had arguments with. After that, the University of Texas graduate said him to drop her off at a friend’s house, and then she called Bryant to pick her up.

The police report stated Nash admitted to not experiencing assault or injury in any way.

After speaking with all parties involved, the officers determined that there was no offense.

The Parking Lot incident came amidst a time when the National Football League was in controversy for its high-profile players committing domestic violence, including Ray Rice and Adrian Peterson.

The police report was never able to conclude whether or not Bryant was the man who dragged Nash. Or if there were any incidents of such nature.

There, nonetheless, still emerged an uproar many blaming the six-foot-two-inches-tall wide receiver indeed committed some foul play over his children’s mother but somehow tried to conceal the actuality. They all pointed to Bryant’s July 2012 incident where he went to jail for allegedly striking his biological mother, Angela Bryant.

Bryant, in subsequence, took to Twitter, posting a statement that said to stop accusing him of such doings.

Are Ilyne And Dez Bryant Still Together?

What makes this question pressing is the fact that Ilyne hasn’t appeared with the father of her two children lately. Also, considering her concealed social media accounts and inactiveness over such platforms hasn’t helped much to query as to where Nash and the current Baltimore Ravens WR relationship currently stands.

Equally important to note is that both the parties have zero pictures of each other on their socials.

How Rich Is Nash’s Partner, Dez Bryant; What About Her Own Net Worth?

In June 2016, Forbes reported the July 2015 agreement between Dez Bryant and the Dallas Cowboys on a five-year contract extension was worth around $70 million. The contract at the time also included a $20 million signing bonus.

That year his merchandise sales were the fifth-highest in the league and high on the list of non-quarterbacks. Additionally, he had partnerships with endorsements including Nike’s Jordan, BodyArmor, and Panini.

While the aforesaid points undoubtedly prove – Dez is an affluent man by all accounts, the same, however, would be a bit troublesome to say for the mother of his children, Nash. The obscurity of her net worth or even her current pursuits is primarily due to the secrecy which she apparently has been living by.