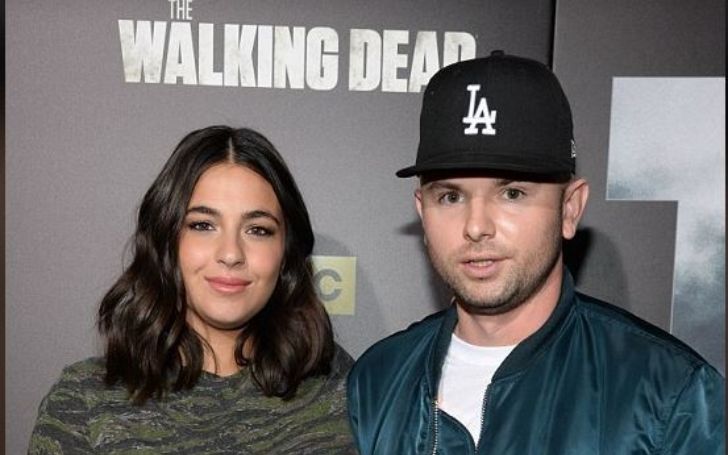 Brick Stowell is a professional photographer for artists especially those of the hip hop genre. He though is better known as the ex-boyfriend of actress, Alanna Materson, the star of the hit AMC horror drama series, The Walking Dead.

Stowell’s former partner, Alanna, with whom he shares a daughter, has been playing Tara Chambler on the AMC show since its fourth season in 2013. His former partner, Masterson is also sister to Last Man Standing actor Jordan Masterson. She additionally is a half-sister to actors Danny Masterson, Christopher Masterson, and Will Masterson.

Brick and the aforesaid actresses were together for about ten years or so parting their ways in the late 2010s. Though what’s intriguing is their split almost literally went unnoticed? Puzzling enough was what had been the story of Alanna’s ex-bae or even his ongoing affairs. Know these in the headings below.

While the figures to his birthdate are still in the middle of nowhere, Brick reportedly calls Marin County in California, a wealthy, suburban area across the Golden Bridge his birth city.

His father was a financial advisor and his mother was a preschool teacher. The flat brim cap wearer allegedly spent his teen years in Marin County going to a lot of camping. He, though, would leave the place at 17 and move to Los Angeles.

Brick Stowell Used To Be A Tour Manager Of Odd Future

When he was together with Alanna, the actress once revealed being a photographer, Brick traveled a lot with the rapper, Tyler, the Creator.

Apparently, Stowell is also the tour manager of the Bastard singer and the founder of a former music collective, Odd Future. The group also features other artists such as Left Brain, Earl Sweatshirt, and Frank Ocean.

Before the group’s discontinuation with the tour, in Feb 2019, the Californian used to manage not only individual concerts but also the entire touring department of Odd Future.

The son of a financial advisor, who is now believed to be in his mid-30s, also took several pictures of the late rapper and record producer from Pittsburgh, Mac Miller.

The other notable point in his photography resume includes the pictures he shot for the March 2011 edition of The Hundreds Magazine, Issue 4. For the cover, he photographed the talents of Holly Madison, a former Playboy model, and Angel Porrino, a television personality, actress, dancer, and showgirl.

There are a handful of sources that are more than just the documentation of Masterson and Stowell’s bygone relationship. However, only a few outlets have mentioned when exactly did the couple started dating.

And turns out they commenced their togetherness in the late 2000s presumably around the year, 2007. Fast forward to July 2014, Alanna Masterson and her then-boyfriend Stowell would announce their pregnancy with their first child.

The news first came through Stowell’s ex-actress-girlfriend, Masterson who shared the pregnancy thing with a baby bump photo on her Instagram handle. In the caption, she wrote,

Soon, Stowell also posted a selfie with Masterson on his now-deleted Insta, writing, “Baby Season.” Prior to the big revelation, Alanna had been strategically covering up the growing bump in her red carpets and other behind-the-scene pics.

In fact, the then-couple kept their pregnancy largely a secret. Masterson, on several occasions, did her best to keep her bump out of the shot.

Brick And His Ex-Girlfriend Alanna Had A Daughter Together

Sixteen months after their relationship, the ex-pair finally welcomed their first child, a daughter who they named Marlowe. Masterson and Stowell yet again took to their Instagram to announce their baby’s arrival.

The Walking Dead actress, this time, shared a photo of the couple kissing, captioning it, “We did it!” For his part, Stowell posted a picture of his infant daughter’s foot in his palm, illustrating his point with man, woman, and little girl emojis.

Though, the smooching picture from the New York-born star’s Instagram feed has since been deleted. While the former couple never explained the unusual moniker, allegedly they went on to name their little girl after the famed Elizabethan playwright and poet Christopher ‘Kit’ Marlowe.

As such, fellow celebrity Sienna Miller had also named her daughter Marlowe after the playwright.

Alanna Once Said Brick Was The Best Dad To Their Daughter

Sometimes after having the baby while giving an interview to Hello Magazine in Feb 2016, Stowell’s ex-girlfriend revealed how they had been coping with their newborn.

When asked if she and Brick both endured many sleepless nights since becoming parents, the 33-year-old actress replied,

She added having lived through an actor’s schedule prepared her well for the sleep deprivation. Masterson further told how her ex-boyfriend’s photography work and the traveling didn’t allow him to sleep that much either. Daughter Marlowe is the first child of both Masterson and her former boyfriend Brick Stowell.

Brick Stowell And Alana; After The Breakup; What Did They Split?

It apparently had been a while since Alanna and Longo started becoming a thing before their eventual wedding in March 2021. After tying the knot, the brunette mother of one, on her Insta, posted a mirror selfie in an elevator while wearing what appeared to be a wedding dress under a Yankees jacket.

As per the Clark County marriage records, Masterson and her husband’s marriage license comes with the date March 12, 2021, with a certification date of March 15. In addition to the couple’s new beginning, The Underground Bunker at the time reported Masterson also put her Los Angeles home on the market.

On the other hand, Stowell’s current love life is conversely a foggy subject mostly because of his detachment from Insta, Facebook, or other such podiums where people might have known what he’s up to these days.

The apparent covertness of the photographer does make it difficult to construe whether he has a girlfriend or not in addition to what his present pursuits are.

While the mother of Stowell’s daughter, Alanna Masterson is one of the actors to receive a good billing if not the highest for her work in The Walking Dead, no such distinction has yet been made for the photographer himself. Especially when the focus is on the money-making issues.

Just to compare, for the majority of her good career Brick’s ex was reportedly raking in an average of $40,000 to $60,000 per episode, if not more. That went much higher when she became a series regular for the fifth season. And further when the series added her to the main credits in the seventh season.

Consequently, it should come as surprise in knowing her net worth is in the region of $2 to $3 million.

What’s in the unknown, however, is the similar stats with respect to the father of her daughter. He may be a cameraman with a credible resume as well as a co-owner of a fast food line, Burgers 99. Though the details of his net worth are all but discussed or analyzed.