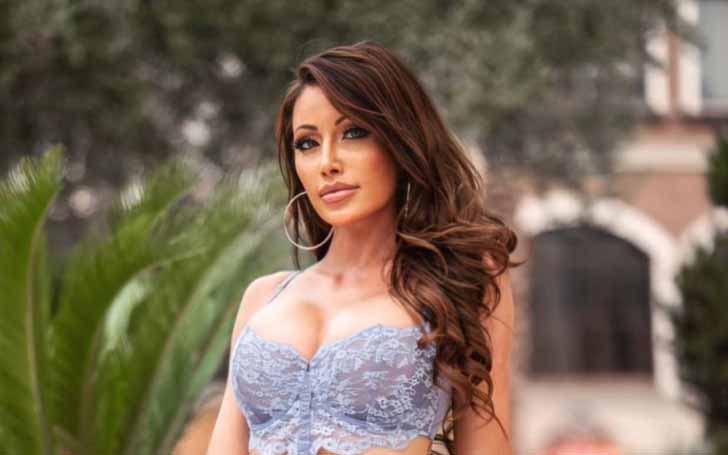 Holly Sonders is a former golfer and model who is very well-known for her bold pictures on social media. Besides, Sonders is also popular for her relationships with high-profile celebrities. The 35-year-old model is currently in a relationship with former boxer and olympian Oscar De La Hoya.

Moreover, Holly was previously linked with a couple of other renowned persons. But who were they? We have all the details on Sonders’ love life and relationships here.

Further, we will also cover the details about her early life, parents, career, education, and more. Read the full article to know everything about her.

Sonders was born on March 3, 1987, in Marysville, Ohio to her American parents Sandy Niederkohr and Dan Niederkohr. She is an American by nationality and belongs to the White ethnicity. As of the present, not much about her early life is known, including her siblings.

When it comes to her education, Holly Sonders graduated high school from Marysville High School and then enrolled at Michigan State University.

Who is Holly Sonders’ Boyfriend in 2022? How Did They Meet First?

As we mentioned before, the model and former golfer, Sonders is currently in love with the former athlete, Oscar De La Hoya. Sonders and her boyfriend Hoya have been together for some months now. According to The Sun, the lovebirds started dating back in August 2021.

At the time, her beau was training hard ahead of his sensational ring return match against MMA legend Vitor Belfort. The couple reportedly met at a boxing event in June 2021 when the model interviewed the former boxing champion.

De La Hoya revealed his and Holly Sonders’ relationship in a conversation with TMZ back in August. Hoya told the outlet:

“Healthy, not drinking, not nothing, I’m just with my beautiful woman, Holly.”

As a matter of fact, Sonders and Hoya were spotted at the Nobu Restaurant in Miami, Florida. The outlet also mentioned that after their initial meeting in June, the pair took a trip to the Pebble Beach golf course.

The lovebirds have been inseparable ever since they started dating. And we can see their love and affection for each other in their social media posts.

Holly Sonders who has over 630k followers shares many photos with her new boyfriend on her Instagram. Likewise, Oscar also shares the couple’s photos with his nearly one million followers.

Holly Sonders Inscribed a Tattoo of Her Boyfriend on Her Back

It’s no secret that Sonders is head over heels in love with her current boyfriend, Oscar De La Hoya. But, the model recently inscribed a tattoo featuring her beau on her back which further solidified their romance. On November 14, 2021, Sonders revealed the large tattoo via her Instagram.

Alongside the tattoo, the model also professed her love for the 48-year-old boxer in the caption. “Dear Oscar, You have everything in life. There is nothing I can give you that you haven’t received already…except for this. This tattoo signifies the day you became The Golden Boy,” Sonders wrote. Have a look at the post.

Meanwhile, De La Hoya, who is the 1994 Olympic gold medalist, said he was ecstatic to receive the gift. Talking to TMZ, the former athlete said, “It actually tops everything that I’ve ever been given. Who can top this?” Oscar added,

“I’ve been given everything you could possibly imagine. And a tattoo, a beautiful portrait of me looking up at the sky to my mother. The ’94 Olympic Games were just incredible.”

On the other side, Sonders said there was no specific reason for getting the tattoo. She said it was a major show of affection. “I have three tattoos. I’ve wanted a 4th for a while.”

Her Past Relationships – Was Once Engaged and Once Married

Well, Sonders is in her thirties, so Oscar is obviously not her first boyfriend. In fact, she has been a couple of relationships publicly. She was previously married to Erik Kuselias. Erik is a television and radio personality who works for CBS Sports currently.

Neither Sonders nor Kuselias has openly talked about their relationship, however, they probably started dating in 2011. It is because, they started making their public appearance that year and until 2010, Erik was married to Kristen Kuselias.

They got married as well, but unfortunately, their wedding date is not publicly available as of yet. After more than five years as husband-and-wife, Sonders and Erik got a divorce in 2016.

Holly doesn’t talk much about her failed marriage, however, back in 2016, responding to one of Erik’s fans, she said, “I filed for divorce over a year ago…we have not been together in a very long time. Thanks.”

Following her divorce from Erik Kuselias, Holly Sonders didn’t date anyone publicly for a couple of years. Eventually, in 2019, news about her possible relationship with the Cardinals head coach Kliff Kingsbury hit the media. The model herself confirmed the speculations on January 9 via Twitter.

They reportedly met when Holly was a sideline reporter for the Big 12 Games while at the same time, Kingsbury had just finalized his divorce. Unfortunately, Sonders and Kingsbury couldn’t remain together for a long time.

She was Shortly Engaged to Vegas Dave

After her split from the Cardinals head coach, Holly started seeing Dave Oancea aka Vegas Dave. As per reports, they started dating in December 2019, after meeting at a strip club. Just months into their relationship, Sonders and Dave got engaged.

The former lovebirds were together for months during the COVID-19 quarantine time in Mexico. They frequently shared pictures from Cabo, Mexico during that period of time. No matter how much they were into each other, they remained together for less than one year.

After the situation gradually became normal, Dave returned to his parents’ home leaving Sonders alone, which ultimately became the end of their relationship.

Oscar is 48 years old as of early 2022. He has been in a number of relationships and was married with kids before he started dating Holly Sonders. De La Hoya was married to Millie Corretjer for nearly one and a half decades. Millie is a Puerto Rican singer and actress.

Oscar and Millie tied the knot on October 5, 2001, they became parents of three children together. They welcomed their first child, a son, Oscar Gabriel De La Hoya on December 29, 2005.

Oscar and Millie ended their marriage in 2016, after around fifteen years of conjugal life. However, as per the sources, they were still making their public appearances as husband and wife until 2020.

Besides, La Hoya previously dated actress and Miss USA 1995, Shanna Moakler. They started dating in October 1997 and their relationship ended abruptly in September 2000. In fact, they were even engaged and also parented a daughter, Atiana Cecilia De La Hoya (born March 29, 1999).

The Ohio-born star completed her graduation from Michigan State University in 2009. Holly competed for the women’s golf team while she was in the university. She got her big break following her graduation when she got a chance to work at Golf Channel in the early 2010s.

After that, Holly Sonders went on to work at FOX Sports for around four years before she left the network in 2019. After her departure from the FOX Network, Sonders didn’t try to find another job. Instead, she started her own fitness app, ‘TeamUp Fitness’, and emerged as a professional model.

Sonders have hundreds of thousands of followers on her socials. Most of her fans appreciate her fitness, good look, and body posture. But what is her body size? Well, if the online sources are to be believed, Sonders has an hourglass-shaped body structure with a measurement of 35-25-37 inches (91-64-94 cms).

Besides, Holly Sonders stands 5 ft. 8 inches or 173 cms and she weighs 55 kg or 121 lbs. Moreover, Sonders has got a beautiful pair of hazel-colored eyes and her hair color is brown.

What is Holly Sonders Net Worth?

Well, as we mentioned before, Sonders has worked as a sportscaster for nearly a decade. We can say with certainty that she earned hundreds of thousands of dollars from her association with Golf Channel and FOX Sports, however, her exact income is not revealed as of yet. Due to that, we are currently in no position to estimate Holly Sonders’ net worth in 2022. But, she undoubtedly has a million dollars in net worth if not more.

On the other hand, her current partner, Oscar De La Hoya is a renowned boxer and a former Olympic champion. He has earned a huge amount of money from his boxing career. Moreover, he also earns a good sum at present as well. According to Wikipedia, La Hoya earned approximately $700 million in pay-per-view income that made him the highest earner for years before the amount was surpassed by Floyd Mayweather.

Meanwhile, talking about Oscar’s net worth at present, Celebrity Net Worth has estimated his net worth to be around $200 million as of 2022.