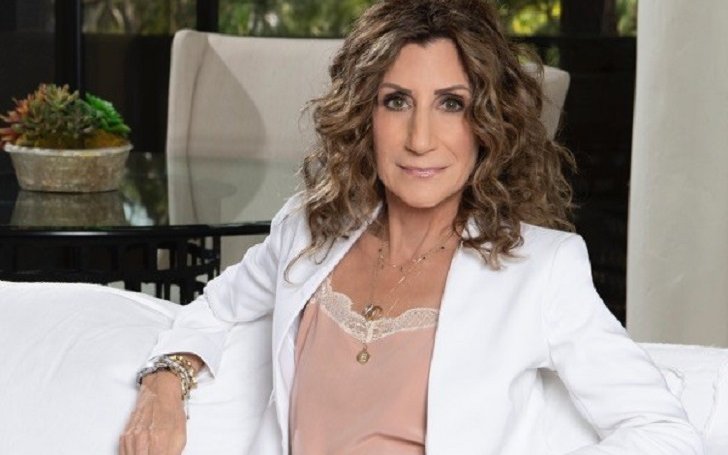 Ernestine Sclafani (aka Ernestine Sclafani Bayless) is a Public Relations guru who came into the light after her marriage to Skip Bayless. Her husband is a popular on-air personality who currently appears on Skip and Shannon: Undisputed alongside the former American football tight end and Hall of Famer, Shannon Sharpe.

Although Ernestine and her husband Skip belong to different fraternities, the couple has maintained their private and professional life with the same efficiency over the past several years. What is the secret behind their enduring relationship? When did they got married?

Find out answers to all the questions here. The article will include many other unexplored facts about Skip Bayless’s wife Ernestine.

Skip Bayless and Ernestine Sclafani love different things yet no conflict: What is the secret of their relationship?

The couple tied the knot in July 2016, in a very low-key wedding ceremony. They are leading a wonderful matrimonial relationship ever since.

Despite their differing interests, not once did their relationship face any problem. While her hubby Skip is a sports fanatic, Ernestine herself is not a sports enthusiast.

If you’ve got a sports-obsessed guy in your life, be sure to pick up my book “BALLS!”⁠ It makes for the perfect stocking-stuffer! 🎄⁠ Link in my bio to purchase! .⁠ .⁠ .⁠ .⁠ #undisputed #foxsports #foxsports1 #shannonsharpe #skipbayless #sportstalk #sports #dating #datingadvice #author #christmasshopping #stockingstuffer #datingsecrets⁠

A post shared by Ernestine Sclafani Bayless (@ernestine.sclafani.bayless) on Nov 12, 2019 at 3:18pm PST

Now you must be wondering how does the pair make their relationship ticking despite differing careers and passions. Well, Sclafani widely talked about how she manages to do it in her book, ‘BALLS: How to Keep Your Relationship Alive When You Live with a Sports-Obsessed Guy.’

In the book, she vividly talked about how to overcome the challenge when you and your partner both like vastly different things. One of the excerpts of her book reads,

“My husband, love him or hate him, has become the most powerful voice in sports media. The astounding irony is that while thousands of guys of all team colors and ages would crawl to Los Angeles to get to watch one game with my husband, I’ve learned to force myself to watch tons of games with him, just so we can spend some ‘couple time’ together.”

The book topped Amazon’s Sports Biographies and Love & Romance lists since its release.

How did Skip and Ernestine first meet?

They first came across back in 2005. At the time, Skip was a host of an ESPN show, Cold Pizza while Ernestine was working at the well-established PR agency. Apparently, one of her clients, actor Kevin Dillon, was on the show with Skip. While telecasting the show, the TV host forgot his script in his dressing room.

During the commercial break, the TV presenter ran from the back door of the green room to get the script. On the way, he came across this beautiful woman who would later become his wife.

While remembering about their first meeting, Skip said to Yahoo,

“You might call it love at first spark. There was just something startling to me about the way we instantly clicked.”

The two soon started engaging in phone calls before going on their first date. Bayless was fixated on sports while Ernestine never had any visible interests in sports. Despite all that, they eventually fell in love. Ernestine sometimes forcefully watches football with her husband just to spend some quality couple time.

Both of them are big movies and TV shows fanatic. The two love Woody Allen movies. Sclafani’s favorite TV sitcom is I Love Lucy.

The two dated for several years before they got engaged in 2011. After getting betrothed, it took a long time for them to tie the knot in 2016.

Besides, the couple initially spent several years working in different states. Thankfully, the distance didn’t bother them, which is why they are still going strong. After Bayless’ relocation from ESPN to Fox Sports, the couple relocated from New York to Southern California.

In spite of their longtime relationship, they are yet to become a parent of kids. Nevertheless, they both are avid dog lovers; Ernestine even mentions herself as a “Dog-Mom” on her Instagram bio.

Furthermore, she also wished herself on the occasion of Mother’s Day, posting a cute photo with her puppy named Hazel. She captioned the image,

“Happy Mother’s Day to all the moms out there! I’m glad to be spending the day with @skipbayless and our “daughter” Hazel, who’s the subject of my latest blog.”

Quite Adorable, isn’t it!

The veteran TV personality was previously married to his high-school sweetheart. He never talks much about his ex-wife. Following their divorce, Skip was also romantically linked to three long-term girlfriends before getting engaged to Ernestine.

Ernestine is a PR expert. She began her career working as an assistant accessories director at Izod Lacoste in Sep 1981. She left the job after around one and a half years of association with the company in Feb 1983.

Soon after, Sclafani landed the same role at Esmark Apparel and left the job in Feb 1985. She later spent around a decade working as a public relations director at Bally of Switzerland. She was responsible for men’s and women’s footwear.

Ernestine spent her next 10-year at the company EDELMAN PUBLIC RELATIONS WORLDWIDE. She worked as the vice president and group head, providing senior-level program development at the office. She also managed a media relations team at that time.

From Feb 2005-October 2018, Sclafani became the vice president of Weber Shandwick, in New York. She currently serves as a principal at the Ernestine Sclafani Bayless PR.

Ernestine attended William Floyd High School, in Shirley. She was a clarinet player for the school’s marching band. She then joined the college, Fashion Institute of Technology, in New York City.

The celebrity spouse was born in 1962, in Mastic Beach, Long Island, New York. Her mother was Jewish while her father was an Italian-American who worked as an engineer at Republic Aviation.

Sclafani moved to Mastic with her family at the age of five. She holds an American nationality and has a mixed ethnicity.

Ernestine Sclafani’s net worth is around $500,000 as of 2020. Meanwhile, her hubby Skip has an estimated net worth of $13 million and is paid a salary of $5 million from Fox Sports.

Sclafani is quite active on social media platforms such as Instagram and Facebook. She has +8k followers on her Insta as of 2020.