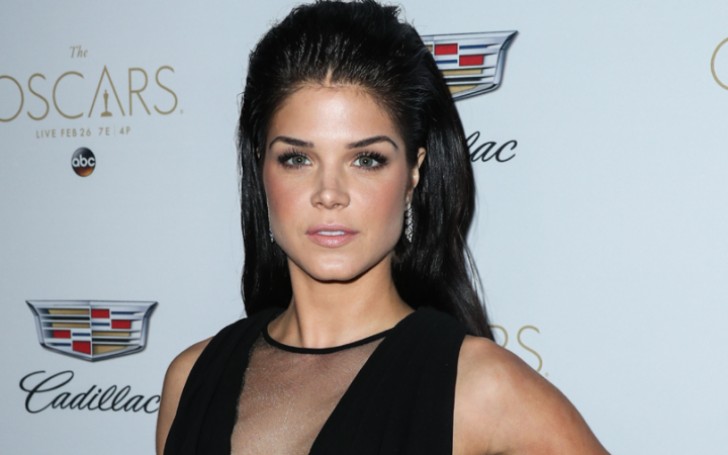 Actress Marie Avgeropoulos became famous after her performance in the hit TV series, The 100. In the series, she played Octavia Blake, one of the lead roles.

The beautiful actress appeared in the award-winning series since 2014 so naturally, fans want to know all about her. Apart from her hit professional life, Marie was once involved in a high profile relationship with a big Hollywood star.

Besides, the actress was once arrested after she reportedly assaulted her boyfriend of the time. Upon reading this, you must be curious if Marie was married to the guy? If yes, then who is the identity of Marie Avgeropoulos’ husband?

Today we’re going to take a look at her life and find out about her parents, relationship status, and more.

Who is Marie Avgeropoulos?

Marie is a Canadian-Greek actress born on 17th June 1986, in Thunder Bay, Ontario. She is famous for her role as Octavia Blake in the CW network series,

In the hit series, she appeared alongside Eliza Taylor, Devon Bostick, Lindsey Morgan, and more.

She got her big breakthrough because of her drumming skills. What happened was, one of her friends told her about a casting call in Vancouver where they were looking for a drummer.

An agent spotted the future star and she starred in multiple advertisements before making her big break in I Love You, Beth Cooper.

Her other acting credits include Supernatural, Fringe, Human Target, and Eureka.

What is Marie Nationality?

She has both Greek and Canadian nationality.

Marie attended the Confederation College and studied Broadcast Journalism. She even worked as a reporter for a local news channel.

Later on, she went to an acting school before eventually packing her bag and moving to LA.

A Part of FFLV India: Not for Profit Organization

Marie believes that kindness reciprocates in many ways. The selfless actress is a part of FFLV, an organization that focuses on eradicating hunger and ending child marriage.

1 year ago these two sisters, Rashmi and Gauri, aged 13 and 14, disappeared from school. Their father had decided to illegally arrange marriages for both of them. #FFLV child protection team stepped in & took a strong lawful stand to stop the dual child marriage & get the girls back in our classrooms. I am thrilled to announce that now the girls are back in school, in control of their own destiny and have dreams for their own future. They may one day get married, maybe not – but that’s their choice. ⬆️LINK IN BIO ⬆️Watch their heartbreaking story with a promising outcome in my documentary series. #endchildmarriage #genderequality #shemustcount #india #educationfirst @fflvindia

In 2018, she visited India and helped the organization in many ways. She motivated all the girls who were forcefully married at a young age and helped them.

Moved to LA with her pet Calypso, an Italian Mastiff

It was in 2014 when then wannabe actress decided to move to Los Angeles. She hoped in her Dodge Spirit, whistled for her Italian Mastiff, Calypso, and headed south.

At the time, Marie had no one waiting for her in LA, she just decided to take the huge gamble. In the end, it paid of.

As for her pet, she currently owns a French Mastiff named, Chewy. She shares a lot of pictures with her pooch and even set up an Instagram account for him.

She is the daughter of Philip and Augusta Avgeropoulos. The 33-year-old rarely talks about her parents in the media so not much is not known about them.

However, she once disclosed a few members of her family are nurses and dental assistants. Moreover, she also revealed her mother works as a bank teller.

Though Marie never divulged anything about having any brothers or sisters, we’ve some evidence about her sibling.

She shares a lot of pictures with her niece and nephews and calls herself their “crazy aunt.” Take look at the picture below!

I am their crazy aunt .

In addition, she added a throwback picture with one of her nieces implying they have known each other for a long time.

19 years ago , Toodie was a wee thing trying to wake up auntie her Auntie Ree. To this day, my lovely niece of mine, I’m not a morning person. 😴#wheniwas14 #nowshesapplyingforuniversity 😳#timeflies #throwback @victoriadarosa

Be that as it may, until and unless Marie herself says something about her siblings, all we can do is speculate.

Marie is a Big Time Adrenaline Junkie: Does her Own Stunts

While growing up in Thunder Bay, Maria was involved in a quite of lot outdoor activities. She used to go fishing, hunting, and camping with her family.

It was her childhood activities that later shaped the rest of her adult life. Till now, the actress is an adventurer who loves doing outdoor stuff as opposed to just staying in.

If you follow her on Instagram then surely, you’ll come across numerous pictures of Marie enjoying outdoor activities.

From going out skiing to riding horses to learning martial arts, there aren’t many activities where Marie hasn’t tried her hands on. She stated in an interview, “Riding horses and motorcycles are my favorite pastimes.”

Moreover, she even performed all of her stunts in the series, The 100. We all know how scary the stunts were and Marie being a badass did all of them without any double.

One of her all times favorites activities has to be horse riding. She even calls herself a horse girl. If there are any horses roaming around the movie set, Marie won’t hesitate to giddy-up.

Evident from many of her posts, Marie is without a doubt, a country girl.

As we mentioned earlier, there are not many outdoor activities, she doesn’t indulge herself in and bike riding is one of them.

The actress rides a 1200cc Harley Davidson. In an interview, she mentioned how staying in LA worked out well for her hobbies. She said, “I’m Canadian so it’s nice to live in LA where you can ride it all year long and it’s not freezing at -40 which is a bonus.”

At the moment, Marie is not in a confirmed relationship with anyone, however, a few years ago, she made headlines with her boyfriend.

In 2018, Marie was arrested after an altercation with her partner. There were reports the duo had a big fight which left her beau with wounds all over his body.

The Los Angeles County District Attorney’s office stated that a 41-year-old man called 911 and claimed his girlfriend had hit him during a verbal exchange.

She apparently hit him multiple times in the head, neck, and arm while they were in a car, driving through 134 freeway. Marie was subsequently arrested and taken into police custody.

According to the authorities at the Los Angeles County District Attorney’s Office, Marie can face up to 364 days in jail for the misdemeanor charge if convicted of the one count of injuring a spouse, cohabitant, boyfriend, or child’s parent.

Boyfriend Didn’t Press Any Charges and Bailed Her Out

As ironical as it sounds, her partner soon bailed her out by paying $50,000 in bond. What’s more intriguing is that he never pressed any charges.

According to reports, he called the cops just so they could handle the situation, however, they arrested her straight away. He mentioned that if the incident had happened in Canada, then the police would’ve reacted differently.

What is her Boyfriend’s name? Was she married? Who was Marie Avgeropoulos’ husband?

After the incident unfolded, fans started getting curious regarding the identity of the man who called 911 on her. Well, the actress refrained from revealing his identity, however, we might have a few ideas.

Marie has a picture with a guy on her Instagram account wherein her fans are claiming them to be a pair. The date even adds up to the domestic abuse charges pressed by her boyfriend in 2018.

Even more, she has a picture of the guy with her pet dog in which fans are writing, ‘a family of three.’ Who knows? Maybe he was her boyfriend and maybe they are still dating.

Besides, there was no information about Marie being married to the man whom she reportedly assaulted. Safe to say, she has never tied the knot before.

Talking about her past affairs, her most famous relationship was with actor, Taylor Lautner. She started dating the handsome hunk in 2013.

The former flames first came across while filming the movie, Tracers. Unfortunately, they broke up in 2015, though it was an amicable decision.

Besides, Marie had a fling with her I Love You, Beth Cooper co-star, Shawn Roberts.