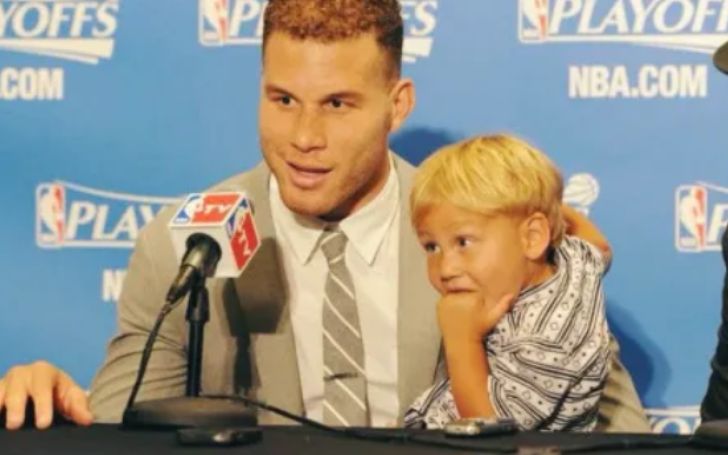 Ford Wilson Cameron-Griffin is the eldest son of NBA player, Blake Griffin and his ex-fiance, Brynn Cameron. Despite his dad being the star of basketball, the life of 9-year-old Ford is off the radar. He lives a quiet life with his mother today after his parent’s separation.

So, is Ford the eldest and the first son of the former couple? Not exactly. He indeed is the first child of Griffin, but the second of his mom Brynn. Yes, Wilson has a half-brother – who is he, and who is his dad? Apparently, his mother had a romantic relationship with another player long before Cameron met the future father of her two kids.

Here, in the following article, we have come up with some interesting facts about Ford Wilson Cameron-Griffin and his life. Let’s find out together!

Ford Wilson Cameron-Griffin Is A Kid Born With Mixed Ethnicities; His Early Life

Ford Wilson was born on the 1st of August 2013 as the eldest son of his parents Blake Griffin and Brynn Cameron. As we said earlier, the little guy is born with mixed genes. Talking about his ethnicity, Wilson has the ethnicities of Caucasian, English, and African American. If we are to break these genes down, his mother comes from a Caucasian background, while his dad has English and African-American genes.

Since the birth of their son Ford, his dad, despite having an open life, has kept his son’s life out of the public’s eyes. In other words, Ford lives quite a quiet life even today.

Just after his birth in 2013, the proud father Blake also released a statement asking the media for some privacy. He said,

“We are very happy to have a healthy baby, but respectfully request to keep our personal affairs private and let us focus on parenting our son.”

On the contrary, it is easy to make assumptions about what the star kid is up to these days based on his age. As of 2023, the son of the NBA player might be in school, particularly, in elementary school. He’s too young to mingle with the press and media, so Ford might just be focused on school and having play dates with his friends.

He Is The Middle Child Of His Mom Cameron, While The Eldest of Griffin; Details on His Siblings

9-year-old Ford Wilson Cameron-Griffin might seem like the eldest kid of his parents, however, the reality is a bit different. He is the eldest son of his dad, Griffin, but is the second child of his mother, Brynn Cameron. Furthermore, Griffin is his mom’s middle child. He has an older half-brother and a younger sister, Finley Elaine Griffin. She is the youngest child of Blake and Brynn and was born on 26th September 2016. To add, Finley is just 3 years older than her big bro.

Further, Ford’s half-brother’s name is Cole Cameron Leinhart. Can you guess who his dad is? Actually, his mom Cameron had her first child Cole with the professional football player, Matt Leinhart.

Apparently, before meeting the father of her two other kids, Cameron was in a relationship with Matt. Their son, who is Ford’s elder half-brother was born in 2006 and is 16 years old in 2023.

Ford’s Dad, Blake Griffin, Is An NBA Player; Why Is He So Famous?

Needless to mention, Ford Wilson Cameron-Griffin is famous because of his dad, Blake Griffin. Blake is a star NBA player who currently plays for the Boston Celtics.

Ford’s father’s love for basketball grew in college. As a college student, Griffin was a player for the Oklahoma Sooners. For his remarkable athletic abilities, Griffin was even awarded the title of “consensus national college player of the year.” It later also helped him to boost his career even more!

Soon, 33-year-old Griffin was selected by LA Clippers in 2009. This was when an NBA legend really stepped into the balling. As of 2023, Blake is recognized as a 6-time NBA All-Star and a 5-time All-NBA player. He indeed has come a long way since his college days.

To add, the basketballer used to play for the Detroit Pistons in the past. He left the team after 3 years in 2021 and soon joined the Brooklyn Nets.

Is Ford Wilson Cameron’s Mother Brynn As Famous As His Father? What Does She Do For A Living?

In addition to having a professional baller as his dad, Ford Wilson is also gifted with a mother with great athletic abilities. Even more so, his mom was a star player for USC’s Trojans from 2004 to 2008.

She played the game for around 4 years and was able to hit 131 career three-pointers throughout her tenure. Unfortunately, her career would have been greater than just 4 years if it wasn’t for her hip injury. Brynn Cameron suffered a severe injury on her hip during her college days and later underwent surgery. However, her injury led to the ultimate end of her basketball career.

As of now, nobody knows what Brynn Cameron is up to these days.

The Relationship Between Ford Wilson’s Parents; How Did It End?

Ford Wilson Cameron-Griffin’s father Blake and his mom Brynn were together for about eight years. However, the relationship wasn’t as smooth as one might think. Actually, Griffin and Cameron had an on-and-off relationship.

Ford Wilson’s parents first met in 2009. Soon, the former lovebirds felt an immediate connection and started seeing each other. They even got engaged shortly after and planned to get married. So, everything seemed quite well in the beginning.

So, what exactly went wrong? Nobody knows what the exact reason for their big breakup was. As it turns out, Griffin and Cameron had broken up several times before they officially called it quits. Some sources reported that the ex-couple broke up somewhere between 2013-2014 i.e., right after Ford’s birth.

But, they were soon seen together with their baby boy at the beach and the public’s assumptions of them getting back together also turned out to be true. Furthermore, the rekindling of Blake and Brynn’s relationship also led to the birth of their second child, Finley Elaine.

Nevertheless, Wilson’s parents officially ended their relationship in 2017. It was reported that the 33-year-old player walked out on his fiance and kids for a supermodel. After canceling his wedding with Ford’s and Finley’s mother, Brynn, Blake went on to date Kendall Jenner. According to his ex-fiance, Griffin cared more about glamor and popularity than taking the day-to-day responsibilities of being a family man.

Who Got The Custody Of Ford And His Little Sister?

Ford and his sister, Finley were very young when their parents broke up. In other words, Blake’s son was just 4 years old, while his daughter was just a baby when the NBA player decided to walk out on them.

Well, talking about the custody of their children, it is obvious Brynn Cameron won the custody of their kids. Some reports even claimed the proud mother Brynn even dragged the basketballer to court and sued him for not taking his responsibilities as a father more seriously.

Further, the court ordered Griffin to pay $250,000 a month to his ex-lover for child support. Both Brynn and Blake did not agree with the sum in the beginning but they later settled the business of child support personally, so no one knows what exact amount the basketballer pays today to his ex.

As the son of two successful parents, Ford obviously lives the life he deserves. As for his parents’ net worth, his dad Blake Griffin has an estimated net worth of $31 million in 2023.

On the other hand, his mom Brynn’s fortune is $1.5 million.