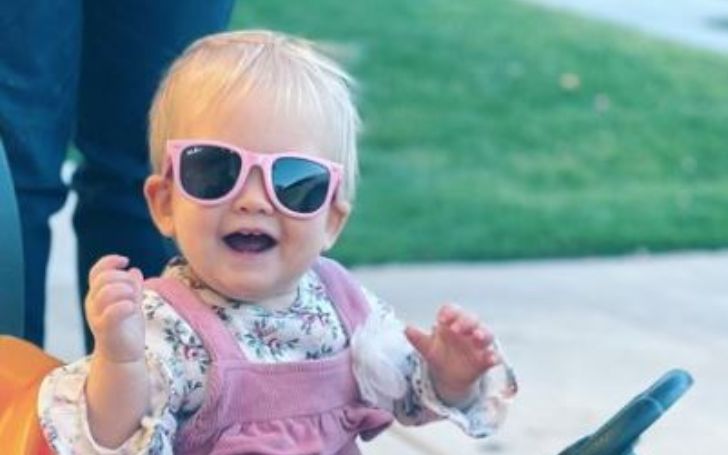 Evie Elise Kress is the daughter of well-known actor/director Nathan Karl Kress and his actress wife London Elise Moore. Her father first came to the limelight by working in many TV promotional videos, one of them being for providing the voices of Easy and Tough Pup in the film Babe: Pig in the City. Likewise, Nathan is recognized for portraying the character Freddie Benson on the Nickelodeon sitcom iCarly.

Along with being the daughter of two successful parents, Evie was also a real blessing to her mom and dad. Well, you will find out the reason why they are so happy to have Evie in their family.

Well, here are several facts about Nathan Karl Kress’ daughter Evie including her age, birth, siblings, and many more.

Evie Elise Kress was born on March 20, 2021, in the United States. Her mother London gave birth to her after multiple spontaneous miscarriages. Thankfully, during Evie’s delivery, nothing unusual happened. She was 6 lbs, 4 ounces during her birth.

Kress’ father Nathan announced the big news on his Instagram. He said,

🎵 “You are the dawn of a new day that is breaking… a masterpiece still in the making… the blue in an ocean of grey.” 🎵 And just like that, 3 became 4 ❤ Evie Elise Kress, born 3/20/21 at 5:31pm. 6 lbs, 4 ounces of light and life. My wife is superhuman, and doing extremely well. My children are the greatest little gifts on the planet, and I still can’t seem to stop crying.

Talking about her ethical background, from her mother’s side, it’s still unknown, but, Kress is German, Scots-Irish/Northern Irish, English, and Scottish from her daddy’s side. Similarly, the 1-year-old star kid is American by nationality.

Furthermore, Welton Moore and Chris White Moore are her maternal grandparents. Unfortunately, the details about her paternal grandmom and granddad have been kept from the prying eyes of the media.

Siblings: Evie Has An Elder Sister

Evie Elise Kress has one elder sister Rosie Carolyn Kress (b. December 21, 2017). Did you know, her sister was born before the due date? Despite being born early than the delivery date, their mother London gave birth to Rosie without any problems. In fact, her big sista weighed 6 lbs and 6 ounces during her birth.

Moreover, the two siblings share a great bond and are living happily together with their parents.

For Evie and her sister Rosie, their father Nathan is like a superhero in real life. According to the actress London Elise Moore, her husband Nathan is the most incredible, selfless, love-giving, fun-loving, and caring father to their two kids. The eldest daughter even blows kisses and feels safe in her father’s strong arms.

Also, Evie’s mom London often talks about her husband’s fatherly love for their kids. On the occasion of Father’s Day, the mother of two wishes her hubby a happy father’s day with a lengthy message on Instagram,

“You’re just the most incredible, selfless, fun-loving, love-giving, caring father a child could ask for. The way Rosie blows you kisses & buries herself safely into your strong arms are my absolute weakness. Thank you, thank you, thank you for being THE most amazing father to our precious daughter in your now SECOND year of fathering (what?!?!😱). I love you forever & ever my baby-daddy husband ❤️ you’re KILLIN’ the game. Happy Father’s day, every day, my love!”

How Is Her Parents’ Acting Career Going?

Both Evie’s parents are doing well in their respective professional careers. Her father Nathan has worked on more than 40 TV projects till now. Some of his acting credits include Jimmy Kimmel Live!, Miranda Cosgrove: Leave It All to Me, The Penguins of Madagascar Snort About Mort, iCarly, iCarly 2: iJoin the Click, Nickelodeon Cast: Jingle Bells 2010 Version, and many more.

On the other hand, talking about her mother’s acting career, London has appeared in TV shows like Insidious: Chapter 3, Grandma, Into the Storm, OZ the Great and Powerful, Need for Speed, and so on.

Evie’s mom London and her dad Nathan exchanged their vows just after being in a relationship for four months. The couple married on 15th November 2015. And their wedding was held in Sierra Madre, CA.

Further, Evie’s parents hired @thecinematicage and @hotofftheprescott for their wedding video work. Similarly, they hired @tingmakeup for their hair and makeup.

Prior to their marriage, did you know, they were already friends by the age of 14? Indeed, the lovebirds later turned their friendship into romance and began dating and then tied the knot. On the occasion of the 10th anniversary of the TV show named iCarly, London described her hubby as a “best friend, husband and incredible life partner,”

Besides, there were once rumors the director Nathan Karl Kress was once married to the actress Miranda Cosgrove. But, it later came out as fake.

Net Worth: Evie Elise Kress’ Parents Are A Millionaire

Evie’s father Nathan is estimated to have a total fortune of $1.5 million as of 2022. Similarly, her mom London has a net worth of $1 million. Both of them have mostly earned a fortune from their respective acting careers.