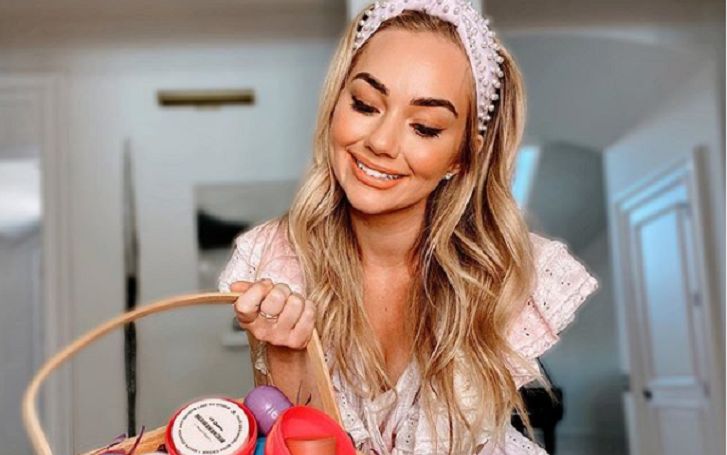 Chelsea Goff is an American model. She has modeled for several reputed magazines and companies. But, Goff gained massive fame for being the wife of Freddie Freeman. Her husband is a professional baseball player from Fountain who played for the Atlanta Braves for 12 seasons.

The two are in a beautiful relationship for several years now. Let’s know when the two got married? Do they share children between them?

Apart from her relationship with Freddie, we will also talk about Chelsea’s parents, siblings, and a lot more!

What does Chelsea Freeman do?

Chelsea Goff is a model who was featured in STARE Magazine. She has also modeled for DayGlo Miami and Miami Wines & Spirits convention. Apart from this, the celebrity spouse partnered with Dress Up and Distressed Vintage Couture.

In addition to her modeling career, Chelsea is also a social media influencer with over 215k followers on Instagram.

But Goff gained wide attention following her marriage with Freeman.

Chelsea Goff married Freddie in 2014: Details on their Wedding

The power couple tied the knot on November 22nd, 2014. They organized their ceremony at St. Regis Bal Harbour in Florida.

Talking about their wedding dress, Chelsea opted for an embroidered mermaid gown while her husband Freddie wore a black suit.

The bride later changed into a beaded V-neck with a textured net skirt for the reception party. They are happily married ever since.

How did Freddie Freeman and Chelsea meet? Their Engagement

Freeman came across his future wife Chelsea in the early 2010s. His then-girlfriend Goff announced their relationship on Facebook on 8th July 2011.

It took a few years for them to take their relationship to the next level. Freddie popped the big question on January 19, 2014. She announced their engagement on the same day on her Facebook page.

The model wrote on the photo,

“He got down on one knee at sunset where I grew up in front of my family and most of my closest friends. So happy!”

Furthermore, she has also created their solo engagement album on her FB.

Back in Feb 2015, Golf also featured on ‘Say Yes to the Dress Atlanta’ on TLC. In the interview, she told about her husband’s unconditional love for her,

“He is just a great person. We’ve been together almost three and a half years and he still opens my car door for me.”

Chelsea Is The Mother of Three Children, Including Twins

The couple initially announced they were expecting in March 2016. They posted a video on Twitter, in which, Freddie was seen hitting a powder-filled ball to reveal the gender of the baby.

In 2020, another good news awaited the duo. On 29th August 2020, the happy couple revealed Chelsea is pregnant with twins. A day after, Chelsea posted a video on her Instagram where her husband Freddie and son Frederick blasted two balls and revealed the gender of their upcoming twin. They were expecting twin boys in early 2021.

“It’s been hectic, but it’s been everything I ever wanted. I had one on December 30 and one on Valentine’s Day, February 14. Chelsea gave birth to Brandon John and our other one named Maximus Turner is named after my big league debut.”

How much is Chelsea Goff’s Net Worth?

The couple previously lived in their house located in Roswell, Georgia. Freeman put his 6-bedroom house on the market with an asking price of $775,000 in early 2016.

Chelsea is a passionate philanthropist

Goff has been actively involved in the charity. She mostly creates Facebook Fundraisers seeking financial support for several organizations as well as individuals. In 2019, she collected $1016 out of $1000 for the Rally Foundation for Childhood Cancer Research. She also raised $1070 out of $850 for Dragonfly Foundation.

Who are Chelsea Goff Parents? Her date of birth and early life

Chelsea is the daughter of English parents Andrea Brandon Goff and Warren D Goff. Her father Warren is a CEO at a local business called ListData. He is from the UK and studied engineering at South East London College. He currently resides in Pompano Beach, Florida with Chelsea’s mother.

On August 22, 2016, Chelsea posted a wedding photo of her parents on the occasion of their 35th marriage anniversary.

As for her date of birth, Chelsea was born on 24th April 1991, in South Florida. She holds dual citizenship of the UK and the US and belongs to the Caucasian ethnicity.

Goff has a sister, Victoria Goff, and a brother, Josiah Goff, born in August 1998. He studied at Broward College. Following his graduation, he went on to work at Jacaranda Golf Club as a bag staff. He later landed a job at Bankers Life. He currently works at CCA Calvary Christian Academy. Josiah is currently married to Brianna Goff.

The Goff siblings are very close to each other.

Other Interesting Facts of Chelsea Goff