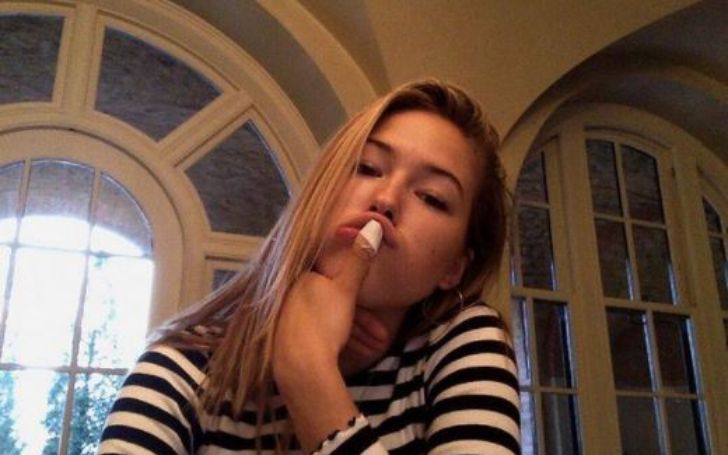 Julie Rose Clapton is a star kid, who is famous as the daughter of Eric Clapton. Her father is the singer and the guitarist known for songs like Wonderful Tonight, Tears In Heaven, Layla, I Shot The Sheriff, Cocaine, Change The World, and others.

Julie’s father is 67th on Rolling Stone’s list of “100 Greatest Artists” and he is also an inductee into the Rock and Roll Hall of Fame on three separate occasions — once as a solo artist, once with the Yardbirds, and once with Cream.

Rose Clapton is the first daughter of Eric with his second wife, Melia McEnery. Julie, a GenZ is now all grown up and with her social media handles is gaining considerations for herself. Know if she stands out far from the spotlight of her father, what she is striving towards, & the rest including her boyfriends or something else.

Julie Clapton was born on Jun 13, 2001. She was born in her mother, Melia’s hometown of Columbus, Ohio. In a different manner, Julie’s famous musician-father is a native of Ripley, Surrey, England. Her paternal grandfather, Fryer was a soldier from Montreal, Quebec.

From her mother’s side, Julie, on the other hand, is of Scottish-English and Korean-Irish. The young adult’s maternal grandfather was allegedly a construction worker.

In like manner, her maternal great grandfather, Walter McEnery was of Bonita Springs, Fla. As for her mother, Melia, she used to be a graphic designer around the time when she met the 18 Grammy winner.

Of Melia and Eric’s three daughters, Julie was born out of her parents’ wed-lock. Some family members of Eric claim the birth of Julie eased the singer’s grief after the tragic death of his son, Conor in 1991.

Julie’s father, Clapton met her mother, Ms. McEnery, a graphic artist, in Los Angeles in 1999 while working on an album with BB King.

They wed in front of a handful of close family and friends at St Mary Magdalen Church in Ripley, Surrey, on New Year’s Day. Julie was then six-months-old. At the time of their marriage, Julie’s dad, Eric was 56 while her mother, Melia was 25.

Intriguingly, the English guitarist and his partner initially had invited the guests to attend their daughter, Julie’s christening.

Accompanying her with the baptism was her older half-sister, Ruth then 16. Ruth was Julie’s father, Clapton’s first child from his previous relationship with Yvonne Kelly.

After the attendees had witnessed Julie and Ruth’s baptism, Melia and Clapton in a twisting way revealed they were going to have a wedding in that very event.

Her brother died a horrible death in March 1999 after falling from a skyscraper in New York. Some insiders report, the guitarist-father of Julie used to take Milea to visit the grave of his son Conor. Further, Conor’s death also inspired one of Clapton’s hit Tears In Heaven.

Does Julie Rose Clapton Have A Boyfriend?

Julie is apparently is dating a girl named, Chloe Gardner. Clapton first showed something was serious with Gardner in Jan 2021 on her Instagram via sharing a picture of herself and her alleged partner smooching each other.

While Julie didn’t reveal much about the image, the tension between them pretty much gave away that the two girls were in a relationship.

Though another thing that is worth the attention is Clapton hasn’t shared any images of her alleged girlfriend since the aforesaid one. On the other hand, there however isn’t so much news about their break up, or such, either.

Julie Has Been In Some Of Her Father’s Songs

While it is speculative as to whether she wants to pursue her father’s career, Julie Rose Clapton has been in one of his albums, titled, Old Sock, a family affair.

Every Little Thing, one of two original compositions on the album, includes the debut performances on record of then 11-year old Julie Rose as well as her sisters, Ella May, and Sophie Belle. Clapton released the album in March 2013 after it aired on The Wall Street Journal’s Speakeasy blog.

Though this wasn’t the first time Clapton featured one of his kids on his album. His oldest daughter and Julie’s elder half-sister, Ruth had a spoken-word part on Inside of Me. It is a song on Eric’s 1998 album, Pilgrim. Ruth was 12 at the time.

Turns out or something that has been widely agreed is Julie’s musician father, Eric Clapton is easily a member of an ultra-rich club with a whopping net worth of over $450million.

Active since the early ’60s, the Tears In Heaven singer has sold more than 130 million records. And hardly anyone prefers to argue for his title as one of the most important and influential guitarists.

In addition to awards and general kudos, his level of success naturally translates into an impressive financial valuation. His $450 million fortune is a truly remarkable sum that wholly reflects his decades-long work in the music industry.

Julie’s father is one of the best-selling musicians in history; he is a multiple times recipient of certified gold or higher

Worth mentioning when discussing his richness is his car collection. It allegedly includes some extremely rare Ferraris, which is easily worth $50 million, perhaps even $100 million. He further used to possess art collections which when he sold reportedly pulled in tens of millions of dollars.

Maintaining his status as a rich celebrity are his multiple properties in several places, including England, France, Ohio, and Antigua. Out of all the possible outcomes, one cannot deny the fact that Clapton’s daughters are going to inherit quite a sum in the near future including Julie.