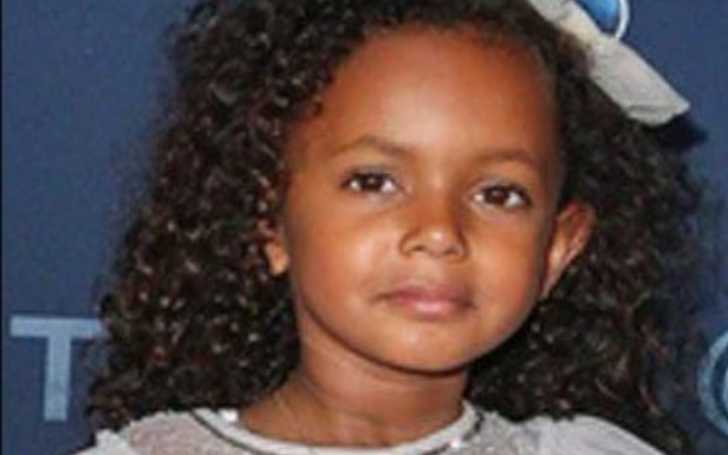 Madison Brown Belafonte is an American star kid famous as the daughter of Mel B and Stephen Belafonte. Her mother is a Leeds-born English singer, songwriter, actress, and television personality. She is worldwide famous as the former member of the 1990s best-selling female group of all time called Spice Girls.

Likewise, the celebrity child’s father is an American film/TV producer and director. He is popular for his contributions to films like The Crow: Wicked Player, Never Die Alone, and Mutant Chronicles.

Today, we will learn the unknown facts about Madison & find out where is she now as her parents are no more together. When and why did her parents separate? Who has her custody? Continue reading the article to explore everything about Mel B’s youngest daughter Madison Brown Belafonte.

The star Kid Madison Brown Belafonte was born on September 1, 2011, in Los Angeles, California, under the sun sign Virgo. She is also recognized by her nickname, Maddy. The 11-year-old has an American nationality and belongs to mixed ethnicity. Her mother made an announcement of her birth via her social media. She tweeted:

“Finally our baby arrives. Stephen nearly passed out, Phoenix screamed, I laughed so hard the baby popped out!!! She is just sooo amazing!!”

Though her birth announcement was made through social networking sites, her parents kept her away from the media for a while. The world got her first glimpse nearly after a month after her arrival. The little bundle of joy looked no less than an angle in the picture.

Madison Brown is the only kid of Mel and Stephen together. From her father’s wedding to Nicole Conteras, she has a younger half-sister named Giselle Belafonte. She was born on June 23, 2004, in the United States.

Likewise, the star kid has two more half-sisters from her mom’s side. One of her half-siblings, Angel Iris Murphy, was born on April 3, 2007, to her mother and Eddie Murphy. Her other half-sister, Phoenix Chi Gulzar, was born on February 19, 1999, to Mel B’s ex-husband Jimmy Gulzar.

Brown Belafonte was only 5 years old when her parents separated. Mel B and Stephen Belafonte reportedly met on the set of the movie ‘Talk’. They started their relationship as friends and continued their friendship for years.

Madison’s parents officially started dating in February 2007. In the initial phase of their relationship, Mel B was pregnant and Stephen was good support to the former. After dating for almost 5 months, the duo secretly married in a private ceremony.

The couple tied a knot on June 6, 2007, in Las Vagas. A year later, they renewed their vows on November 8, in the presence of their family members in Hurghada, Egypt.

Madison’s mother Mel B filed for divorce from her husband just months before their 10th wedding anniversary. The couple’s relationship was going stronger until things started falling apart between them when the singer appeared on the X-factor with a bruise on her face.

In the divorce paper, the former Spice Girl member mentioned that she separated from Belafonte after he started torturing her verbally and emotionally calling her fat, ugly, and old.

She even disclosed that he called her worthless at times and said that no one wanted her except for him. With lots of drama, the couple finally divorced on the 15th of December 2017.

After the divorce was finalized, Mel B and her husband agreed to the joint custody of their only kid. She reportedly paid $350,000 for his legal fees and pays 5000 per month in child support. She even received a restraining order from the court to stay 200 yards away from Stephen Belafonte.

How Is Madison Brown Belafonte’s Relationship With Her Parents?

Madison Brown Belafonte is very close with her parents. As she has joint custody, she sometimes lives with her father when her mother is busy. During the COVID-19 pandemic, she was with her dad in Los Angeles and the father-daughter duo spend a really good time with each other.

The star kid celebrated her 9th birthday with her dad during the Covid pandemic phase. Her father threw a mocktail party on her birthday at the Sugar Factory in LA, California. Talking about her special day, she was looking happy in a mint green floral dress and a pink ‘Birthday Girl’ sash and was treated to a huge bowl of ice cream and gifts on the table.

On the other hand, Mel B does not get much time to spend with Madison because of her busy schedule. She could not meet her during the pandemic and it was the hardest thing to deal with for the singer.

Not having her child with her for months at times, she somehow takes time whenever she can from her busy schedule. The X-Factor Season 2 judge takes her daughter out to restaurants, parks, and theatres, and on vacations every time she is free.

Being a pampered child, Madison Brown often appears on her mom’s social media. She is spotted traveling places on the train with her half-sibling and mother. Likewise, they even spend quality time staying home watching Netflix and chilling on Christmas.

Madison Brown Belafonte Was Afraid of Her Mother In The Past

The 11-year-old’s mother wanted to take her daughter to the UK for 2019’s Christmas. Though her father was okay with it at first but later refused Mel B.

As per reports, Madison shared with her father that she did not want to leave LA. The child was afraid of Mel B but the reason for that has never been clear.

The matter went to court and Stephen disclosed that their kid is traumatized and even the therapist declared seeing her mother in the United Kingdom would harm her mental health. Meanwhile, the judge too refused Mel B and said, ‘I’m not going to put this kid in harm”. After the hearing, Belafonte was successful in keeping his daughter safe and sound with him.

Belafonte’s parents have collected a decent sum through their successful careers in the entertainment field. As of now, she enjoys a combined net worth of $7 million earned by her guardians.

Her father, Stephen Belafonte is a producer and director. Professional since 2003, he is famous for films like Thank You for Smoking, Bad Lieutenant: Port of Call New Orleans, and Prison Ball. Currently, he is worth $1 million.

On the other hand, Madison’s mother, Mel B is an English singer who was a member of the 1990s popular band Spice Girls. Likewise, she also does philanthropy work with her daughter helping to get food and education for the one with its crisis. According to Celebrity Net Worth, she owns $6 million in net worth as of 2022.