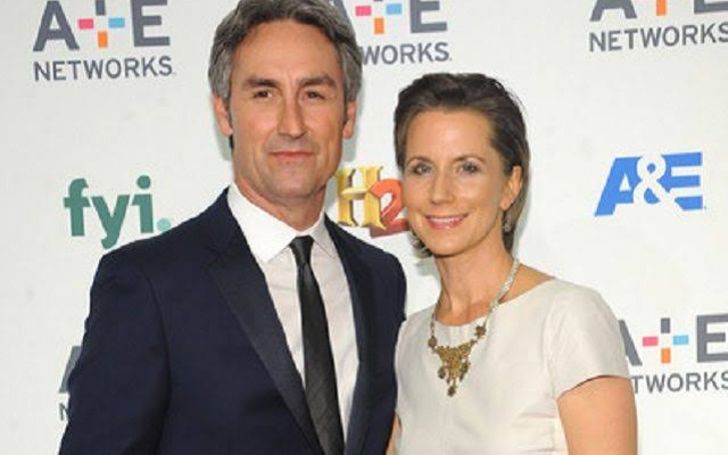 TV actor Mike Wolfe and his wife Jodi Faeth have been an ideal couple ever since they met. And they are proving it every now and then. While Jodi attests to be a perfect spouse and mother, Mike has stood beside his wife even in the worst times where she was diagnosed with cancer.

Here, we will try to explore their journey right from their first meeting to their wedding and now as parents. Let’s zoom on.

Not all relationships tend to be successful. Moreover in the world with dating websites and apps becoming a mainstream attraction, long-term relationship is a rare scenario.

However, defying all, Mike and Jodi have raised a bar a lot higher when it comes to setting an example as a marital couple. They got married on September 8, 2012, and are going as strong as ever; they went to Hawaii on their honeymoon.

In a marriage surpassing 8 years, the duo has not come across any infidelity issues that make them stand out as a husband and wife.

Do They Have Child Together?

Mike and Jodi are parents to a daughter named Charlie Faeth Wolfe. She was born on January 20, 2012, seven months before her parents’ wedding, and weighed nine pounds four ounces at birth.

The interesting thing is that Charlieuses both Faeth & Wolfe as her surname.

Besides, Jodi also has another child, a son Kyle, from her previous relationship.

As a mother, Jodi extremely happy and tells having a kid reminds her of childhood. Talking about the best part of being a mom, she said:

The wet kisses, and the blueberry pancakes in my hair. Kids make you remember your own childhood and how fun being silly can be. Not everything has to be so serious.

Faeth’s daughter was reportedly born with a cleft lip which they only noticed months after her birth. Soon after the discovery, they put their kid under the medication.

Charlie is a strong girl—she even surprised the surgeons and got to go home early. We realize how fortunate we are that we had the resources to get Charlie the best doctors.

Jodi Faeth & Mike Met 18 Years Prior to Their Wedding

Jodi and Mike walked down the aisle in 2012, but they had been together for over 18 years prior to their wedding. They reportedly met for the first time back in 1994.

Interestingly,  Mike’s love for collecting antiques and transforming them into expensive decorative pieces became one of the reasons Jodi got hugely attracted to her.

And over the years, Jodi admits, his love for antiques has remained as attractive to her.

Further for their years-long togetherness, they credit their communication and understanding. Talking about the same in an interview,  Jodie said,

I think we both work extra hard communicating and making sure the other person is OK.

The Husband and Wife live in Iowa

The happily married couple currently live in Iowa, in their $176k house. As a lover of antique, Mike house also has two decor stores, flaunting his best collections.

Further, the house has two-car garages and a courtyard as well. The house has also been featured in Mike’s TV show American Pickers.

In December 2013, Jodi was diagnosed with the second stage of Non-Hodgkin Lymphoma or NHL. This kind of cancer affects white blood cells called lymphocytes which is essential for immunity.

Generally, this cancer is common in people addicted to carcinogenic substances, but in Jodi’s case she is vegan and a strict follower of exercise and diet.

Anyway, she was lucky to be diagnosed in the initial stage which could be cured with proper medication and healthy habits. She is currently cancer-free. Talking about cancer in an interview, she said,

Believe it or not even vegan, exercising, juicing mama’s get cancer. I was the last one to expect it. Life was everything I could possibly dream of then bam…

Well, American Pickers is an American reality show on The History Channel that features Mike Wolfe and Frank Fritz. The show is widely popular and shows the two of them travelling across the country in search of forgotten old relics. They eventually try to restore them to the original one.

Both the cast are loved widely for their work in the show. The show has 7 ratings on IMDb and 7.9 on TV.com.