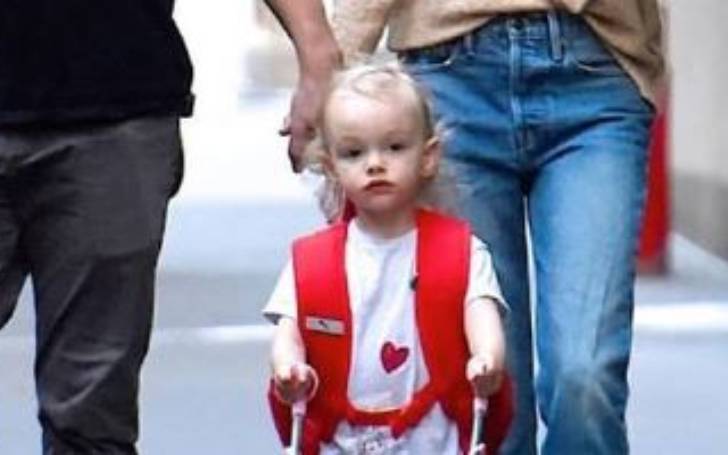 Nina Sadoski Seyfried is a five-year-old celebrity child and media personality. She became famous as the daughter of Mean Girls actress Amanda Seyfried and stage and film actor Thomas Sadoski.

Her mother announced her pregnancy during Givenchy’s Live Irrésistible fragrance launch event in 2016. Amanda Seyfried called her pregnancy the biggest ‘blessing in the world’ and posts pictures of her cute little bundle of joy on social.

Moreover, her parents got together after they crossed paths on the set of The Last Word. Stay with us to know more about the 5-year-old rising star. Details of her age, childhood, siblings, family, & her parent’s relationship.

Nina Sadoski Seyfried was born on 24th March 2017 in New York and is 5 years old as of 2022. She is the older daughter of actress Amanda Seyfried and TV actor Thomas Sadoski.

Both of her parents are equally famous in the entertainment world and are known for their respective works. Due to this, the star kid has always been a media magnet.

Though her parents keep her personal life and upbringing away from the limelight as much as possible, Nina can be spotted in her mother’s social sometimes. Her parents are so private regarding her identity that none know about her looks even after 5 years of her birth.

As well all know, Amanda has been private about her personal life as far as we can remember. Well, she did the same thing while she was pregnant with her first child.

The pair announced their pregnancy to the public only during Givenchy’s Live Irrésistible fragrance in November 2016. Amanda wore a mini black dress revealing her barely visible cute baby bump.

Her look was completed with matching black strap heels paired with a sleek low ponytail.

Nina Seyfried Is Basically Growing Up In A Farm

Back in 2019, Amanda revealed that her mother Anna helped her raise Nina. She has talked about her mother in multiple interviews saying how grateful she is to have an extra hand raising her kids. Especially during the covid-19 pandemic.

Amanda called her mother a third parent and said,

“My mom lives with us — she’s our nanny. My life is awesome because she is the third parent for us. And if we’re still sleeping it’s great, ’cause she can hang out with my mom. She wakes up early.”

Talking about Nina’s upbringing, she mostly spends her time on the farm helping around and learning new things every day. Looking at pictures and videos posted by her mother, Nina can be seen helping feed the barn animals, getting close to them without a fear, and more.

“She’s an individual with individual thoughts and individual dreams and nightmares. Making people is a very big responsibility, and it’s so worth it.”

She once posted a cute video of Nina captioning it “She’s hired,”.

Amanda also revealed that her first pregnancy was a surprise and she shared the good news with her husband Thomas through a poem she wrote.

The lovely couple welcomed Nina in March 2017 and revealed the good news via one of their representatives a week later. They simply said, ‘The Mamma Mia star gave birth to a baby girl.’

As per the sources, Seyfried went through 24-hour labor out of which 10-11 hours were spent back home. She later said that it didn’t feel that long. She continued,

Before welcoming their first child, the pair talks about their excitement during an interview with E! News. There, Amanda said, “I’m ready to go, I’m ready to meet the kid,”

While on the other hand, Thomas goes, “I’m terrified but I couldn’t be more excited. She gets the singing. I do the diaper changing.”

Similarly, during an interview with Marie Claire UK, Seyfried jokingly opens up about how she decided to go for a baby. She said,

“I keep feeling like my eggs are dying off and need to get on it… I want a child. Badly. I want to be a mother, badly. I’m not ready but nobody’s ready. It changes everything… so how you can ever be ready for that?”

A parent’s first meeting their newborn is always a special moment and Amanda and Thomas were lucky to capture it all.

Talking about her first meeting with the child, Seyfried says it was perfect. She said it was quiet, intimate, beautiful, and the best moment of her life which she would go through again in a heartbeat.

The sweet bundle of joy became an older sister when her parents welcomed their second child, Thomas Seyfried Sadoski born in September 2020.

The birth of her brother was announced via INARA and War Child USA where the mother of two wrote,

“Since the birth of our daughter 3 years ago our commitment to the innocent children that are so brutally affected by conflict and war has been a driving force in our lives, With the birth of our son the work of INARA and War Child has become our North Star.”

Like Nina herself, her brother’s face is not shown to the public yet. The two-star kids live with their parents and grandmother on a farm.

As we’ve mentioned before, Amanda and Thomas first met on the set of an off-Broadway play The Way We Get By. The couple then went on to star as an on-screen couple in the film The Last Words.

Unexpectedly, their on-screen romance turned into an off-screen real-life thing by March 2016. After dating for a while, they got engaged in September 2016.

A year later, Nina’s actor parents eloped and got married in a private ceremony on 12th March 2017. The news was announced by Thomas during his appearance on The Late Late Show with James Corden.

“We eloped. We just took off into the country with an officiant and, just the two of us, and we did our thing,”

As the little star is too young to have a career and earnings of her own, she is living and thriving off her parent’s income.

Her actor mother, Amanda Seyfried is worth around $16 million as of mid-2022. She is widely popular for Mamma Mia! film sequels, Dear John, Les Miserables, Mean Girls, Love the Coopers, and others.

In a similar way, her actor father Thomas Sadoski’s current fortune is around $4 million. He is popular for The Newsroom, John Wick’s film sequels, The Mimic, Stalking the Bogeyman, and Life in Pieces.

As of 2022, they are parents of two and are living a happy and blissful life together in their Catskills farmhouse.