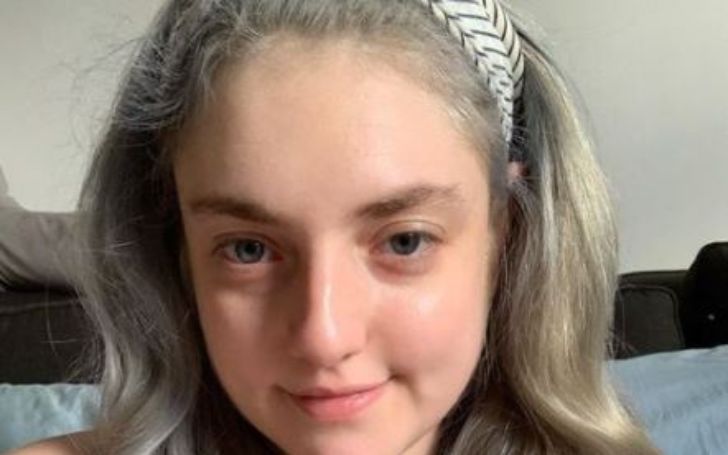 Rachel Ann Weiss is a singer, songwriter, and musician from New York. She is best known as the only daughter of the Body Heat actress, Kathleen Turner, and her ex-husband, Jay Weiss.

As the daughter of strong supporters of the arts, Rachel had a good musical career start releasing a moderately successful album, cruising on tours with the likes of other celebrity kids, and having her songs featured in shows, films, and even video games.

Weiss has been writing songs for years. Some songs from her collection, Dear Love also made their way to the Netflix dating reality television series, Love Is Blind as the show’s feature songs. Worth mentioning is — Love Island (US) featured her song If I Wish on one of its episodes.

Rachel Ann Weiss in addition is more than simply Kathleen Turner’s daughter or an artist. Know how she came to chose a slightly different career to her mother’s. Also, read about how her relationship with her Hollywood mother is along with an in-depth glance at her personal and professional life.

The only child of Jay Weiss and Kathleen Turner, Rachel Ann Weiss was born on October 14, 1987. She was born and raised in NYC.

From her mother’s side, Rachel is of English, some Scots-Irish/Northern Irish, and Scottish descent. Her maternal grandparents were Patsy (Magee) and Aaron/Allen Richard Turner. The latter who was born in Louisiana grew up in China with his family of missionaries and was also a U.S. Foreign Service officer.

Paternally, the now 34-year-old, Weiss is Jewish. Her father, Jay Weiss had a country band called The Blues of which he was a lead guitarist. Professionally, however, he is a real estate investor.

Weiss attended Hampshire College where she pursued a degree in music though she quit after three years. She was also in a band while in college. She attended an all-girls school where she developed further enthusiasm for music.

The songstress currently resides in the East Village of New York.

In an interview with Mr. Media in Oct 2013, when asked how she developed an interest in music, the singer who is often confused with the British actress, Rachel Weisz, responded saying – performing and writing music was something of a compulsion to her. Weiss added,

Its the time in which I am the happiest in all of my life.

Rachel further told getting to do that as a profession had always been her dream.

She, however, ascribed the 1989 Disney animated film, The Little Mermaid as the biggest factor that inspired her to follow the musical career.

Weiss also revealed she was such a fan of Little Mermaid that for years she believed she was Ariel. Rachel would spend all her time by the ocean, or by the pool, or sitting on the rocks in Central Park.

The New Yorker artist says her mother has been extremely supportive of her career choice. In an interview, Turner, who has also guest-starred in Netflix’s The Komisky Method, once declared her most treasured possession is her daughter.

In the same sitting, the Crimes Of Passion star though admitted she was sort of absentee mother and wished she would have given her daughter more time.

Kathleen also wants her funeral to play one of her daughter’s songs, Strong Like You. In fact, Weiss especially wrote the song for her actress mother.

Rachel Weiss dropped her first album Dear Love in 2014. Soon after launching her first collection, the daughter of actress Kathleen Turner, Rachel Weiss explained how she waited a long time to make an album in that she simply wasn’t confident.’

Weiss added she nonetheless moved forward with the encouragement of a bandmate whom she went on to impress very well after giving him some solo demos.

“These are too good”, she quoted her band member. After that, Weiss said her life turned around. Rachel released her EP Always at the Rockwood Music Hall on September 8th, 2014.

She has also toured with James McCartney, the son of Paul McCartney in addition to doing several shows in the UK ranging from London to Scotland. What’s more she has also toured throughout the East Coast as well as hit festivals like SXSW.

As of recent, however, the Dear Love singer hasn’t come up with much music or songs and also hasn’t talked about tours and performing. As evident from her Instagram handle, in the present, she is mostly hanging out with her friends and family.

If not for Kathleen’s issues with getting pregnant, Rachel wouldn’t have been the two-time Golden Globe winner and her husband’s first and only child.

In an interview with Daily Mail in Jan 2008, Turner revealed how she had several difficulties conceiving a child with her former partner.

“I’ve experienced the joy of motherhood, the sadness of infertility, and a happy marriage that eventually became a necessary separation,”

Not only did Turner suffer a miscarriage before Weiss, but she also went on to have hurdles while trying to get pregnant after the birth of her daughter.

Kathleen remembered how Jay and she kept trying to give Rachel a brother or sister but to no avail. Eventually, in her mid-40s, she reached the jolting realization that she couldn’t get pregnant again.

Even when they went to see infertility specialists ask about in-vitro fertilization, Kathleen disclosed her doctors told her eggs were no longer viable.

Although she may not have biological siblings, Weiss does have a half-sister named Marlow born through her father’s current relationship.

Does Rachel Have A Boyfriend?

Again looking at her Instagram feeds, Rachel Ann Weiss very much appears to be a single woman. Of all the posts on her socials, she is yet to reveal or even mention her love life.

While she does have an Instagram picture where she is kissing a guy, Weiss hasn’t disclosed if he was her boyfriend or it was just in a spur-of-the-moment thing.

In one of her past interviews, though, she once admitted to having been in a relationship. In fact, she confessed to writing her song Dark Is Coming “mostly about a very important night of my life.” Weiss added the creation took inspiration from the time she and her then-partner had spent on a beach.

She also disclosed the song basically narrates her time talking with a man she’d “loved until the sun came up again.”

While most of the reports and sources alike agree Rachel’s parents are millionaires, the real deal about their daughter’s net worth is a bit of an absurd query.

The ambiguity stems from the apparent fact that she hasn’t let out all about her professional endeavors much less what she cashed in from all those bygone tour performances and songs.

Although her reputation as a rising artist has certainly diminished to an extent over the last few years, one could still assume she is fairly well-off considering she is the daughter of a millionaire actress.