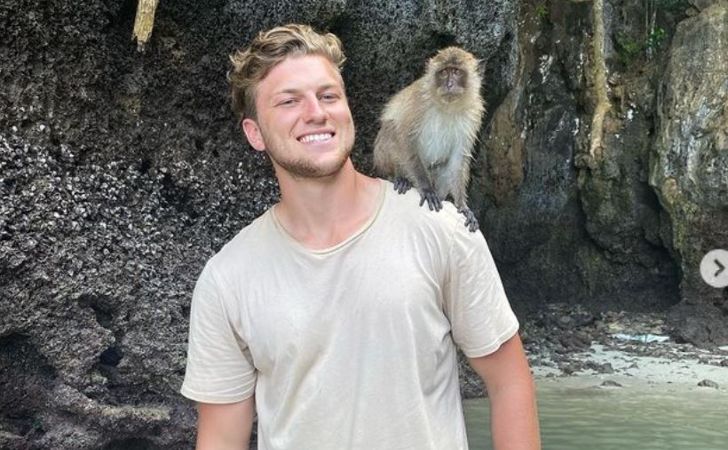 Having tied the knot in 2019, Jonas has already received huge recognition as MyKayla’s husband. In this article, we are going to talk about some interesting details about Harmer, his wedding, children, and much more.

Who is Jonas Harmer?

Husband of American Olympic Gymnast MyKayla Skinner, Jonas Harmer was born on July 14, 1997, in the United States. Originally from Utah, Harmer is one of four children of father David Harmer and mother Elayne Wells Harmer.

Further, he is the grandson of a former member of the California State Senate, the late John L. Harmer. Not only this, but his grandfather was also the lieutenant governor of California.

Unfortunately, none of his grandparents are alive. His grandfather died in 2019, whereas his grandmother Carolyn Harmer passed away in 2015.

Similarly, his father ran for Congress as the Republican candidate in California’s 11th District in 2010. At present, his father serves as the CEO and president of the Freedoms Foundation at Valley Forge.

Talking about his educational background, he is well educated. After completing his schooling, he attended Brigham Young University, where he studied business from 2017 to 2021.

As we said, Jonas is a married man. He is married to professional gymnast MyKayla Skinner. The couple married on November 14, 2019, in Salt Lake City, in a private wedding ceremony. All their friends and family members attended their marriage.

The couple had become engaged just a month prior. Jonas proposed to his long-time girlfriend Skinner on the terrace of the building where he got down on his knees with a ring on his finger. Later, MyKayla announced their engagement via an Instagram post, where she wrote,

At the time, both of them were just around 22 years of age.

Harmer Met His Now-Wife At The University

Not many know but Jonas met MyKayla at a university in 2017 where their mutual friend introduced them. Well, she was instantly attracted to him and so was Harmer. Later, she even confessed that she had never seen a guy as cute as him and that she didn’t think he would be interested in her because she was very short.

But since the unexpected happened, they began dating instantly. After dating for over 2 years, they took their relationship a step ahead getting engaged and later married.

Interestingly, Harmer has already revealed his plans for children. In a Q&A session on their YouTube channel, he along with Skinner talked about the number of kids they would like to have.

While he wants to have two to three kids, his wife wants to have a lot more than him, that is around four to five. That said, their plans to welcome kids are not going to happen anytime soon.

They are still in their 20s and are more focused on their career.

He Leads A Successful Career

Jonas leads a successful professional life. Since March 2019, she has been working as the sales manager at Vivint Smart Home, which is a smart home company. Prior to this, she worked for several other companies.

He started his career professionally in August 2014, when he worked as an Assistant Manager for WOK LIN, until August 2015. Later from August 2015 to August 2017, he was the Missionary at The Church of Jesus Christ of Latter-day Saints.

Eventually, from October 2017 to December 2017, he worked as a Sales Representative at Brio Energy. Later, she also served as Sales Manager at Art Classics LLC from May 2018 to March 2019.

Besides in November 2018, she co-founded a company named Holiday Decorators of Salt Lake Dates. He was involved with the company from November 2018 to April 2019.

Apart from these, he is also involved with crypto trading and also helps his girlfriend-turned-wife with her YouTube channel.