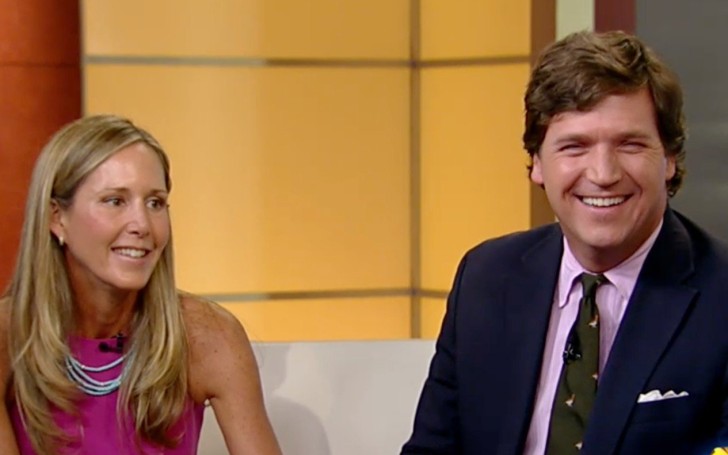 Susan Andrews is famous to the world as Tucker Carlson’s wife. Her husband is one of the prolific conservative commentators in the United States. The couple is happily married for a long time and shares three daughters and one son.

Talking about Tucker, well, he currently hosts his nightly political talk show, Tucker Carlson Tonight. He has been hosting the show on the Fox News Network since 2016. Throughout his career, he has been in a constant state of controversy due to his staunch conservative stance.

Besides, today we’re not going to talk about Tucker as his wife Susan is the center of the attention today. Let’s unravel all the mystery here today!

Susan Andrews Early Life: Her father was the headmaster of her school

She was born in 1969, in Rhode Island, the United States. She belongs to the Caucasian ethnicity and has American nationality. Her father’s name is Reverend George E. Andrews II while his mom’s name remains unknown.

She grew up in Rhode Island and finished her formal education from there. She graduated from St. Georges High School in Rhode Island. While she was studying there, her father George was the headmaster of the school.

What does Susan Andrews do?

Susan, unlike her husband, does not seem to have a famous career. She might be working but there’s not much information available about it.

Nevertheless, there are many sources that claim Susan once worked at the At Your Service Hospitality Management, LLC. Moreover, she once worked at the Episcopal School but she gave up her career in order to take care of her kids. We can say she literally sacrificed her career for her family.

Meanwhile, her husband Tucker first started his career as a fact-checker for Policy Review. Around the late 90s, he also worked as a columnist for Esquire, Slate, The Weekly Standard, The New Republic, and The Wall Street Journal.

In the year 2000, he joined CNN where he co-hosted the show, Crossfire alongside Robert Novak. After leaving the network, he joined a couple of other networks including PBS, MSNBC before eventually joining the Fox News Channel.

Since 2016, he has been hosting Tucker Carlson Tonight. Apart from that, he also operated a right-wing website The Daily Caller.

Susan Andrews and Tucker Carlson are married since 1991

Susan and Tucker are tied into the matrimonial bond since 1991. The pair is an inspiration for all the couples out there regardless of their political affiliation. Initially, they met for the first time at the age of 15 while attending St. George’s School.

When they first came across each other, they instantly felt an attraction for one another. Describing her initial response after seeing Tucker, Susan told in an interview with the People Magazine, “There was a bounce in his walk, he was in his khaki pants and ribbon belt, and I thought, even then, he seemed so optimistic and positive.”

Similarly, Tucker also mentioned the same thing to his wife. He said, “She was the cutest 10th grader in America.”

However, both of them had a bit of a challenge towards their romance. You see, Susan’s father was the headmaster of the high school so naturally, it was quite difficult for both of them. Thankfully, her father was quite understanding.

Their romance continued on till both of them started going to college. When Carlson was on the verge of graduating high school, he decided to propose to his girlfriend. Knowing his conservative beliefs, his proposal was of the same manner. He asked her father for her hand and eventually, they married on August 10th, 1991.

Susan Andrews is a mother of four beautiful children

From their long-term relationship, the pair became a proud parent of four beautiful children, three daughters, and one son. The oldest daughter is Lillie Carlson, then came their one and only boy, Buckley Carlson, a couple of years after Hopie Carlson and eventually Dorothy Carlson.

All four of their kids were raised in a loving environment. Despite the fact that their father draws controversy all the time because of his conservative ways his four kids are incredibly proud of their dad.

The Carlson family is living happily and Susan is the one who ties them all together.

How much is Susan Andrews’ net worth?

Her professional career isn’t out in the open so we cannot estimate her net worth. On the other hand, her husband Tucker is a millionaire. His net worth is $30 million. He earned a major portion of his income from his career in the media.

The family lives in a lavish house in Washington D.C. Tucker brought the house for a staggering $3.895 million.