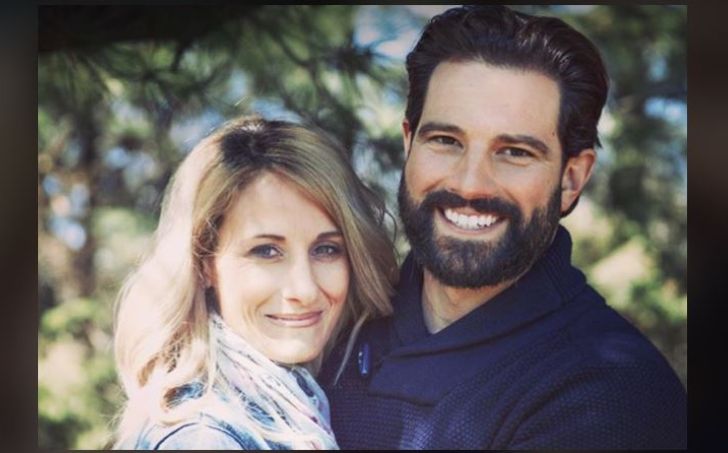 Sabrina McGillivray is a Canadian elementary school teacher and a part-time home renovator assistant and designer who helps her husband, Scott McGillivray in creating everything from room layouts, to cabinetry, drapery, art, and custom furniture.

Her husband Mr. McGillivray is a real estate investor and contractor famous for being the host of Income Property, Canadian HGTV’s home-improvement reality program. The Canadian blonde’s husband, Scott has been renovating homes for more than 16 years helping many people revamp their homes.

He likewise is popular for anchoring several other house resuscitating reality shows and is universally liked for helping couples find their dream homes. As of recent, however, Scott and Sabrina have been flipping the cameras on themselves as they build a forever home for themselves and their two children.

On a slightly different note, the wife of Scott McGillivray is also a celebrity in her own right for occasionally popping by the side of her husband be it in his shows or off-the-screen. Take a look at who is his wife Sabrina McGillivray whilst exploring the HGTV host’s relationship with her and everything you need to know about their family.

Although not much about her family is known, Scott once revealed his wife, Sabrina McGillivray originally Anna Sabrina Deacetis, who was born around the year, 1978, comes from a big family.

“Sabrina and I both have pretty big families, and being close to them is important to us. Of course, everyone lives in different towns,”

Also oftentimes, she has been referred to hailing from a Portugues and even Italian heritage, though neither Sabrina nor her contractor husband has addressed the suppositions.

What’s known, nonetheless, is Ms. McGillivray, who lost her mother in Aug 2018 is a native of Maple, Ontario.

Her brother Carmen is a certified holistic nutritionist, personal trainer, co-owner of a fitness center, and manager at a fitness equipment store.

Sabrina McGillivray Education; She Used To Be A Dancer

Sabrina went to St. Joan of Arc Catholic High School and as for college, she studied at York University in Toronto from where she graduated with a Bachelor’s degree in Arts.

What’s more, she also has a Bachelor of Science And Education from Medaille College in Buffalo, New York.

Sabrina used to be a dancer when she was a child.

She trained under the tutelage of award-winning dance choreographer Anne Sprincis at whose studio, Dansecore, she would later teach jazz and tap.

As a dancer, she passed out from the Royal Academy of Dance Exams.

She currently works in the York Catholic School District in Ontario where she teaches third graders.

In 2006, the designer’s class was one of four to win a region-wide competition called the Healthy Lunch Challenge.

They ranked first among the 214 classes.

Sabrina And Her Husband Scott McGillivray; Where Did They Meet?

The teacher/TV personality and Scott met each other on a beach while they were on vacation.

After laying his eyes on his future wife, Scott asked Sabrina to join him in the volleyball game.

The Maple native, however, denied.

Later the same evening, they bumped into each other and this time Sabrina agreed to have a drink with him.

After that, they gradually built a relationship.

Their nuptials happened around the same time when Scott was beginning his journey on “Income Property.”

Though Sabrina and her husband didn’t share much detail about their big day, Scott did post his first dance with his newly wedded wife on his YouTube channel in October 2011.

In the footage, he busts out some slick dance moves with his bride stunning the attendees.

Their wedding dance, consequently, made the celebration extra memorable.

Scott later revealed while he was not an expert dancer, a few months before his wedding, on Valentine’s Day, Scott had surprised Sabrina with dance lessons.

Sabrina McGillivray Is A Mother Of Two Daughters

After the marriage, the Canadian couple welcomed two daughters, Myah and Layla.

They had their first child, Myah McGillivray on January 25, 2012.

A year later, the former child dancer and her husband became parents for the second time when they welcomed their daughter no 2 Layla McGillivray in late 2013.

While her husband, Scott was born and raised in Toronto, when Sabrina and the on-screen home rejuvenator first tied the knot, they lived in Brampton, ON.

They, however, now divide their time between their place in Toronto and their other home in Fort Myers, FL.

In Canada, they allegedly live in a property in the Northwest end of Toronto which Scott and his wife had bought back in 2006.

What Does She Do?

Sabrina was a recurring star in her husband’s career-defining series, Income Property.

Together with her husband, she also used to invest in a house that hadn’t yet been built.

After the end of Income Property, Sabrina tagged alongside the father of her children to be one of the main casts in his new series Moving The McGillivrays.

It first was a 10 part docuseries televising the McGillivrays family’s pursuits of building their dream home.

While in the series, Ms. McGillivrays helped her husband in engineering almost everything around and served as a chief designer.

Surprisingly, Scott’s wife was initially against the idea of starring in a family reality show.

The reason Sabrina wasn’t enthusiastic about joining Scott in his new series was that she actually didn’t want to be on camera nor did she want to let strangers into her home.

Scott later convinced his wife by telling her how her input was going to be integral to the series, and eventually, she agreed.

Like Income Property, Moving the McGillivrays also went on to receive a warm reception from critics and audiences alike.

Worth mentioning is Sabrina, her husband, Scott, and their kids also have their own YouTube series, Good to Grow.

It focuses on the family’s love of and passion for gardening and growing their own food.

A Brief About Her Husband, Scott McGillivray

Aside from starring in his house remodeling shows, Sabrina’s spouse, Scott has appeared as a judge on several series such as All American Handyman and Canada’s Handyman Challenge.

In 2020, he started a show titled Scott’s Vacation House Rules. The new show bears resemblance to Income Property as Scott advises homeowners on how to make money by renovating houses.

Also, there is Buyers Bootcamp with Scott McGillivray, another show where Sabrina’s baby father aids homeowners in renovating and flipping properties.

How Rich Is Sabrina McGillivray’s Husband?

The quintessential show, Income Property might no longer be on the air, but that doesn’t mean, Scott’s fame or wealth is in the decline or even stagnated.

In fact, that was just the beginning of his journey to global stardom and money-wise some steps into the realm of millionaires. The carpenter/actor/investor/presenter husband of Sabrina by some recent reports is worth somewhere between $4 to $5million.

Add to that he also pulls in quite a lot of money from his more than 100 rental properties, many of them multi-units, including 15 in Guelph. There are additionally millions more coming in from his multiple TV shows and his long practice of investing in homes.