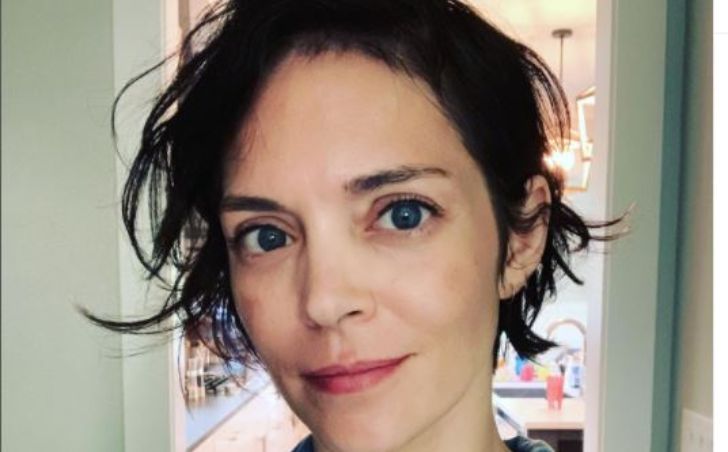 Kristen Torrianni is an actress known for her short appearances in series such as Black Lightning (2017), Film Geek (2005), and Hart of Dixie (2011). She, however, is more famous as the wife of German-born American actor, Cress Williams.

Torrianni’s actor husband is known for his roles in Prison Break and Close to Home. His most notable roles include Mayor Lavon Hayes on The CW series Hart of Dixie and the title character on The CW’s Black Lightning. Cress and his wife, Torrianni have been together since the early 2010s and have two children.

Williams may be a fairly recognizable face in the TV industry, the case conversely isn’t so when the focus shifts to his better half. Decode as much as possible about the what-about of Kristen Torrianni down in the piece below.

Kristen Torrianni Past Is Quite A Mystery

To date, Kristen hasn’t let out where her family lineage roots back to nor has she even put effort to give out her birth specifics. She though presumably is of Italian descent and likewise is believed to be in her 40s.

One thing that Kristen has shared about her history is, as a kid, she used to play soccer for American Youth Soccer Organization. This she revealed in Sep 2018 through her Instagram sharing a TBT picture of herself sporting a soccer jersey set.

Alongside the picture, the caption read,

When your parental units clean out storage you find gems like this #tbt. There were a bunch of these so this may become a series. #futbol #socalgirl #therearesomanymore

Cress and Kristen married each other on Saturday, June 15, 2013, in Texas. For the wedding, Williams wore a khaki suit, a blue shirt, and a straw hat. Torrianni, as for herself, sported a sleeveless white gown.

Some sources, on the other hand, reports Kristen actually wed the Never Been Kissed actor on the island of Kauai on May 21, 2013, and had a formal wedding reception in Los Angeles on Saturday, June 13.

Torrianni and her husband’s wedding reception took place in Los Angeles’ ATX by kitchen 12000 and included about 150 of their family members and friends.

“The wedding was an intimate affair on the beach, with the bride’s and groom’s parents and Cress’ daughter in attendance,”

Williams’ rep reported shortly after the marriage. The actor’s rep added after getting married in Kauai, Cress and Torrianni stayed and honeymooned there for nine more days. While it was marriage no 2 for The Doom Generation actor, Torrianni had walked down the aisle for the first time.

How Did Kristen Torrianni And Husband Cress Williams Meet Each Other?

Kristen reportedly met her future husband, Williams at a church group back in 2006. After that, they gradually became close friends when they started hosting a weekly dinner party together; with the first one in 2011.

Kristen And Cress’ Nuptials Was Attended By Some High-Class Guests

Though, two of the other show’s main stars, Rachel Bilson, and then-pregnant Jaime King were unable to attend. A few months earlier, Porter himself had celebrated his wedding with the casting producer Kelsey Mayfield in Texas on Apr. 20.

As for the caption, Porter wrote, “Celebrating Cress and his beautiful bride! Wishing an eternity of love.” Williams and his co-star Porter, further, jointly performed Boys II Men’s End of the Road at the reception.

Kristen’s Husband Has Two Children From His Previous Marriage

When Cress started dating the former child soccer player, he was then amidst the final phase of his and his first wife, Simbi Khali’s divorce.

They were in a marital relationship for 11 years, from 2000 to 2011 with two children. Williams’ first wife, Simbi Khali is also an actress best known for her role as Nina Campbell on the NBC sitcom 3rd Rock from the Sun.

As with his current wife, Kristen, Cress also has two children. While neither Torrianni nor her husband bothers to share much about their kids, the Prison Break alum in Aug 2018, while talking about his and Kristen’s then fifth anniversary, said, “My wife and I are about to celebrate our fifth-year anniversary.”

The West Germany-born actor additionally talking about his wife’s then second pregnancy added,

“With that and the new kid on the way, everything feels like a second chance. Not to say I completely blew my first chance, but I made some mistakes both career-wise and personally.”

Torrianni actor husband further said he nonetheless felt like being almost at a second act with his second wife and the time they were at the time.

He concluded by saying the lessons he’d learned would be the only things that he’ll be taking with him and no baggage that he has to drag along.

Similar to her husband, Torrianni is also an actress with some film roles under her belt. To say further, although she has ten or so credits in films and TVs combined, Cress’ existing spouse is yet to have her first lead role.

She made her big-screen debut having a cameo appearance in the 2005 movie, Film Geek as Godard Customer 2. Prior to that, she, as an early teenager, was in a short movie, The Kite Messenger.

Torrianni then consecutively appeared in three limited-time projects, Darling Nikki (as Audrey), Paper Thin Walls (as Maid), and The Admission (Janet). In 2011, Kristen starred in yet another short movie titled, Never Give A Sucker A Rap In The Mouth.

The second time she was in a feature film was for the 2011 movie, The Other Side in the character of Sara. The same year Torrianni acted as Midas’ daughter in yet another brief movie, The Man With The Midas Touch.

Three years later, she would guest appear in her husband’s series, Hart Of Dixie as Eliza in an episode titled, Stuck. That year, she also had a one-episode work in the series, Adam And Jamero.

Is Kristen Husband, Cress A Millionaire?

Although not definitive, the widely accepted statement is that Kristen’s husband, Cress is indeed a millionaire. Though there are few to no credibilities in regard to the supposition.

While some outlets state his net worth stands over just $1 million, considering his career that started in the early ’90s, the number seems to be a bit of an understatement.

Whatever, the case though, the now 51-year-old surely has a lot to make assuming the growing ratings and the fondness of people towards his new series, Black Lightning.