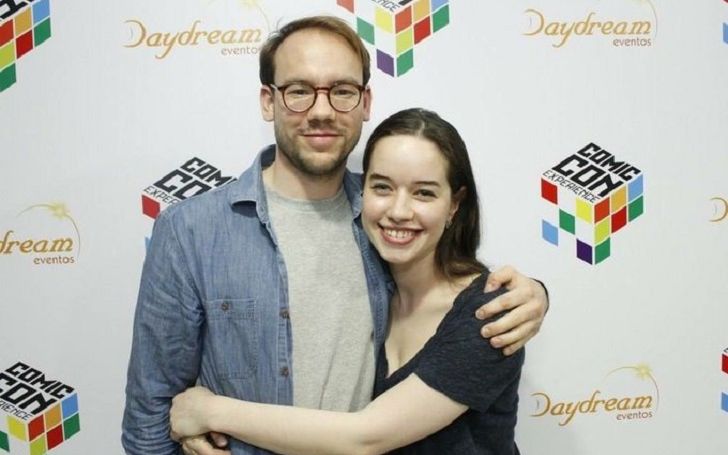 Sam Caird is better known as the beloved husband of the Teen Choice Award-nominee actress, Anna Popplewell. The power couple is sharing a blissful marital relationship for years. Know about their low-key wedding: where did it take place?

Besides, Sam is the son of the prominent stage director and writer John Caird and his second wife Annie Caird. He has a total of seven siblings including five-half siblings from his father’s different marriages.

In addition to his personal details, Caird sporadically works as a director and composer.

Who is Sam Caird? His Movie and TV Work

John Caird’s son Sam primarily works in the West End sometimes as a director and sometimes as a composer. He also collaborated with his father John and composer Paul Gordon to co-write and develop a modern musical version of A Christmas Carol titled Little Miss Scrooge, for the stage in the United States and the United Kingdom. It follows a direct descendent of Ebenezer, Estella Scrooge.

His other on-screen credits include Shades of Mourning, Comedy Lab, Farmhand, and Chicken.

Is From a High-Profile Family: His Parents and Other Details

Sam was born on 8 July 1987, in London, the United Kingdom. He is the son of John Caird and Ann Dorszynski (aka Annie Caird). His parents tied the knot in 1982, in Finsbury, London. However, their relationship couldn’t last long and they reportedly divorced in the late 1980s.

As of now, Ann is in a relationship with a guy named Martin Wiviott, a Vice President at Pantages Theatre.

Moving towards his mom’s bio, Ann studied at UW-Milwaukee. She currently serves as a volunteer at British Museum.

He also has three two older biological siblings: a sister Joanna, born 29 January 1983, and a brother Benjamin, born on 10 October 1984.

Sam Has Five Younger Half-Siblings Too

He has a half-sister Eliza Doolittle, born in 1988, and a half-brother Nathaniel from his father’s third marriage with Frances Ruffelle. Eliza is a renowned singer and songwriter. Dabbled into the music world since the age of fifteen, the artist gained wide popularity after releasing her eponymous album released in July 2010. It went Platinum in the United Kingdom and also features some popular singles like Skinny Genes and Pack Up.

Furthermore, Sam’s three other half-siblings came from his father’s fourth marriage to Maoko Imai; they are two brothers Yoji and Yayako as well as a sister Miyako. John and his fourth wife Maoko are happily married since 1998.

Education: Was a part of the Oxford University Dramatic Society

Caird went to Oxford College, graduating in 2010. He was a Dickens expert at the university. In addition, Sam also became a member of the Oxford University Dramatic Society, where he plays the tragic Moritz.

His estimated net worth is 300,000 as of 2020. He mainly makes money through his various endeavors. On the other hand, talking about his wife Anna’s wealth, the actress has $4 million. Her major source of income is her acting career.

The couple tied the knot on 14th May 2016. They organized their low-key wedding ceremony in The Temple Church, London. It was attended by their family members and close friends.

In addition, the famed music group Motown Supreme performed at their reception party. Later on, Sam and his wife Anna also expressed their deep gratitude for their brilliant performance at the event via Facebook. The couple wrote,

“You guys were extraordinarily brilliant, from the first song to the last number you had everyone on their feet. So fun, so talented and such a pleasure to work with; we are enormously grateful to you for making our wedding reception so special. Now we just need to throw more parties so we can have you play again. Thank you!!’

It’s been years since the two are leading a beautiful marital relationship and their marriage still looks pretty strong. Nonetheless, the two yet to share a child.

Although neither of the parties has yet to reveal the precise date of their first meeting, many sources reported they acquainted with each other while they both were studying at Oxford University. Sam Caird’s wife graduated from the same university in the same year 2010.

Born and raised in London, Anna is the daughter of Judge Andrew Popplewell and Debra Lomas, a dermatologist. She has two siblings including her sister named Lulu Popplewell, an actress and comedian.

As for her career in acting, Ann initiated her journey at the tender age of six but made her debut in the TV production Frenchman’s Creek in 1998. A year after, the actress also scored her first role in the movie Earning (2003). Furthermore, her big-screen works include The Chronicles of Narnia: Prince Caspian, Payback Season, and more.

In addition to her Film work, Popplewell has also worked in TV shows such as Love in a Cold Climate, Comedy Lab, Halo 4: Forward Unto Dawn, and more.