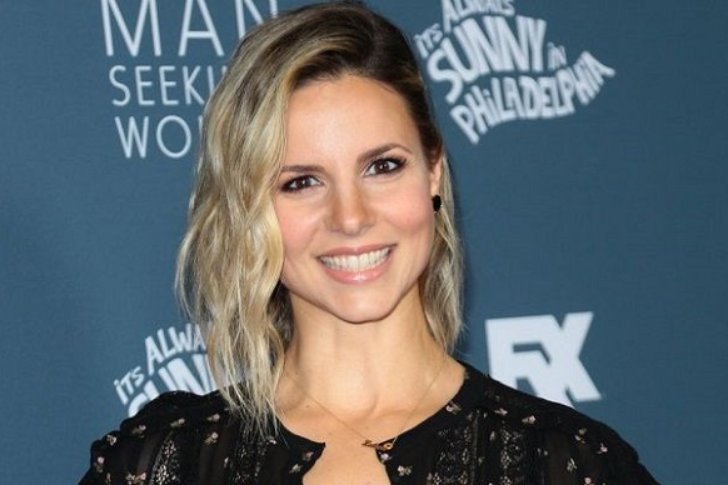 Latiano came to the limelight as a wife of the It’s Always Sunny in Philadelphia star, Glenn Howerton. The couple is also blessed with two children.

Besides, Jill is also credited for her work on both small and big screens, especially her performance on the acclaimed HBO Sex and the City, starring Sarah Michelle Gellar brought her huge popularity.

Where is Jill Latiano From? Her Father Passed Away at 71

Jill Latiano was born on 17th September 1981, in Manhattan, New York City, United States. Her father Bob Latiano died at the age of 71 in 2016. After his demise, the show It’s Always Sunny in Philadelphia dedicated the eighth episode from the twelfth season’s in honor of her father’s memory.

Latiano spent the majority of her childhood in Manhattan with her family. As far as her nationality is concerned, the actress is an American and is of Caucasian ethnicity.

Jill featured as a guest in It’s Always Sunny in Philadelphia‘s episode The D.E.N.N.I.S. System in 2009. Her husband Glenn has acted on the cult hit FX sitcom since 2005. He also plays a major role as a writer and an executive producer on the show.

Her other TV and Film work

Jill made her major breakthrough after played the role in the ABC series Ugly Betty from 2006-07. In 2007, the actress also worked in Epic Movie, Drake & Josh, and Dirty Sexy Money.

Latiano later became part of movies and TV shows such as Lower Learning, Roommates, Community, and The Chicago Code.

In 2014, Jill landed the role of Katie Knox on the FXX’s sitcom Legit. A year after, the actress played Amy in Casual.

Jill Latiano tied the knot with her husband Glenn Howerton on 8th September 2009, in a wedding held at Rancho Las Lomas, California. They are leading a delightful married life ever since.

As per some sources, the two first met in 2006 and got engaged after around two years of relationship in Feb 2008.

Jill and Glenn are blessed with two children. Their first child, a son, Robert Howerton, born on September 12, 2011. She announced her first pregnancy in July 2011.

The celebrity couple welcomed their second son, Isley Ray Howerton in August 2014. The two announced they became parents for the second time in November 2014.

As of now, Latiano resides in Los Angeles, California with her husband and kids.

The happy couple is also a passionate philanthropist who frequently helps various charitable organizations through their Hollywood platforms.

In 2016, Glenn and Jill appeared together at the Hot In Hollywood Charity Event to raise funds for the AIDS Healthcare Foundation.

Jill Latiano has collected good wealth from her work in both movies and TV shows. As per estimation made by various online sources, her net worth is $1 million as of 2021.