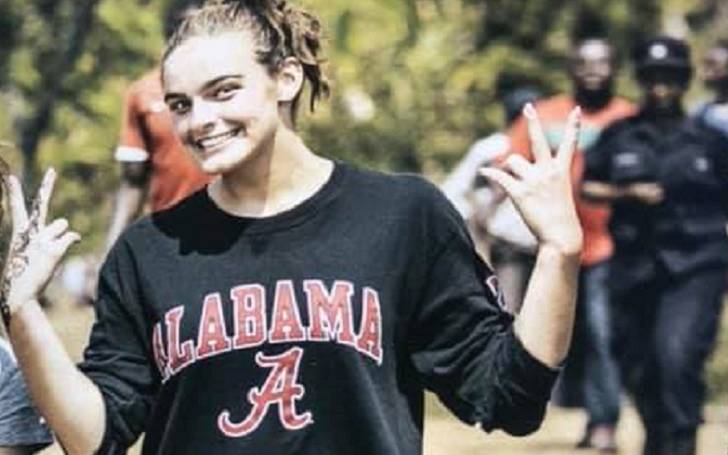 Finley Faith Sehorns is a star kid who is better known as the older daughter of the former football cornerback Jason Sehorn and actress Angie Harmon. She has two younger sisters; one of them plays volleyball. Finley is herself an athlete who plays soccer at the school.

Talking about her parent’s marriage, Angie and Jason were in a blissful marital relationship for over a decade before their amicable divorce. In the meantime, let’s find out Finley’s relationship status whether the girl is dating someone or not?

Here are a number of unknown facts regarding Angie Harmon’s older daughter!

What is Finley Faith Sehorn’s Age? Her Date of Birth and Early Life

Finley Faith’s parents Jason Sehorn and Angie Harmon welcomed their first child in mid-October 2003, in Dallas, Texas. At the time, their publicist Troy Mankin said that the mother and child “were doing fine.”

According to online reports, Sehorn was at St. Louis at the time of his daughter’s birth but later he flew to Dallas to be at Harmon’s side.

Finley spent most of her early days in Dallas with her parents until they made their move to Los Angeles and eventually settled down in North Carolina.

Moving towards her ethnicity, Sehorn is a Caucasian and belongs to American nationality.

Sehorn is the older sister of two; Avery Grace Sehorn, born June 22, 2005, and Emery Sehorn, born December 18, 2008. The Sehorn sisters share a strong bond with each other and often share their adorable photos on social media. Besides, Avery plays volleyball and is also involved in a few other games.

Finley Faith Sehorn Parents Failed Marriage: How it all happened?

Sehorn and Harmon first came across after her mom introduced her to Harmon following a game. The two dated for some time before the football star proposed to his then-girlfriend during his appearance on The Tonight Show with Jay Leno in March 2000. He popped the question in front of a live studio audience and millions of viewers on TV.

The now ex-duo tied the knot on June 9, 2001. A couple of years after their marriage, the two started their journey as parents, welcoming a daughter.

The family of five previously lived in North Carolina.

Harmon and Sehorn were married for over thirteen years before they divorced. Back in November 2014, an insider told Us Magazine that Sehorn used to spend around five or six months a year away from his family. The insider told,

“A large part of it is when you spend five or six months a year away from your spouse, it gets really tough.”

A source close to the duo further said that the couple gradually became habitual with the distance. The source added,

“In the beginning, they really missed each other but then they got into a groove where one person took over the main responsibilities of parenting while the other was working.”

The Rizzoli & Isles actress chose to stay at home and raise their kids in their North Carolina home. Harmon even rejected many roles to be a full-time mom.

Besides, sources insist there were no infidelities in the duo’s decision to split. An insider further added the two separated “amicably” and will do their best for the benefit of their children.

Following their separation, they both moved on with different people; Harmon engaged to an actor Greg Vaughan while her ex-hubby is married to an activist Meghann Gundermann since 2017. Jason also has a daughter named Sage Cru Sehorn, born in 2020 with his third wife.

Does Finley Faith Sehorn Have a Boyfriend?

Sehorn, 17, has kept most part of her personal life out of the spotlight. Due to her tendency of keeping things grounded, it becomes hard to find out whether Finley does have a boyfriend or not. Many online sources say that Sehorn is not dating anyone at present.

Net Worth of Finley Faith Sehorn

Finley is more focused on her study and has yet to choose anything professionally. So, the exact amount of her fortune is still unavailable.

Talking about her parents’ wealth, her father Sehorn has an estimated net worth of $20 million while her mother Harmon’s wealth stands at $30 million. She is paid $185 thousand of salary per episode.

What Happened to Angie Harmon’s Daughter? Her Leg Injury

During the first wave of Covid, Finley went through some bad times. She suffered a broken ankle. The sad news first came out when her actress mom made a post on Instagram showing the leg boot,

“Tbt to my #wcw on these chickadees right here! After heading to the pediatrician with Emery & having her tested for strep (throat swab), Covid (nose swab) & Mono (finger prick) headed to the ER with Finley for her sprained/broken ankle… how’s your day going so far?”

Finley Faith Sehorn is active on Instagram under the name #finnsehorn but has kept her account private. She has over 4k followers on her Insta. But, we are yet to find out other social media platforms that belong to her.

Tracy Marrow Jr.: Everything You Need To Know About Ice-T’s Son: