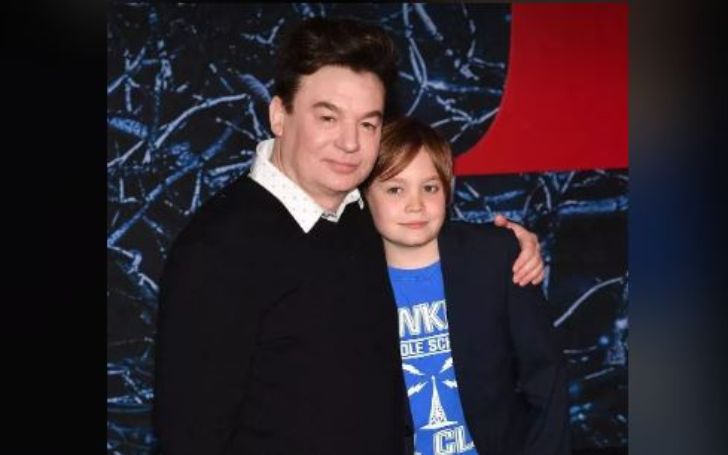 Spike Myers is the son of Canadian actor, Mike Myers and his wife, Kelly Tisdale. Spike’s actor father Mike is famous for his eccentric portrayal of Austin Powers in the spy action comedy franchise of the same name. He also is recognizable for having lead credits in franchises like Shrek and Wayne’s World. Myers had his son, Spike in the early 2010s with his longtime partner and wife, Kelly Tisdale, a former coffee shop owner, and an ex-scenic artist.

Although Myers is well private when it comes to his personal life, he seemingly has the desired family of which Spike is one of the members. It was also because of Spike and his sisters that Mike had taken a break from acting for six years. Myers also considers Spike as his super fan. While Mike Myers is often among the interests of people, at times, some of his children also manage to invite quite the public’s curiosity. And one of them is his son, Spike.

He and his siblings have been talked about several times regarding their relationship with their celebrity parents and on occasions, for their weird names. Know how Spike got his; what was the story in addition to an extended detail on his birth, how’s he growing up as an actor’s son, and his mother, among others.

The Reason Behind Spike Myers Name

Myers and Kelly named their first child Spike because they apparently were fond of how common it was in Liverpool  England. The couple also liked the name because Mike allegedly is a fan of Irish English poet and comic, Spike Milligan.

Myers first explained the reason behind his and Kelly’s children during his appearance on The Late Show With David Letterman in Aug 2014.

“Spike is a very common Liverpool nickname if your name is Eric,”

said the Toronto-born actor to Letterman.

The show marked the first time ever Myers showed the picture of Spike and his sister, Sunday. The father of three was also a fan of a radio guy by the name, of Spike Jones, and the director, Spike Jonze.

Actor Adam Sandler had also given some piece of words to Myers when he was about to become Spike’s father. Later the Pentaverate actor admitted the Billy Madison actor was right and said he had become compassionate after having his son.

Mike was already in his late 40s when Spike his first child was born. Spike Myers was born Spike Alan Myers on Sep 29, 2011.

After his birth, Mike’s rep reported that the Shrek actor was the happiest he had ever been up until that point.

His first sibling, a sister named Sunday Molly was born in April 2014. Spike would have one more younger sister when his parents, Myers and Kelly welcomed their second daughter and third child, Paulina in Nov 2015. Much like Spike, his sister, Sunday, also has quite a story, as once explained by their father, Mike himself.

The now 59-year-old said since he and his wife both hated Sundays they wanted to give something beautiful connotation to it so they ended up naming their daughter, the first day of the week.

“Sunday is because me and my wife Kelly hate Sundays — I’m not even kidding — and we wanted to turn it around and make it a good thing,”

Spike’s sister, Sunday’s middle name likewise was inspired by Myer’s aunt, Molly in Liverpool, England. The Amsterdam star says to him she is his guardian angel.

Spike Used To Take Care Of His Infant Sister A Lot

The first child of Mike Myers was involved in taking care of his first younger sister Sunday as much as he could. Myers especially made him do so quite often when his first daughter was newly born. During those periods, Spike reportedly refused to call Sunday by her name and instead referred to her as Baby Sister. He would be always ready to change Sunday’s diapers.

He Once Developed A Funny Accent

When he was younger, Mike used to call his son, Spike “super funny.” It allegedly had to do with Kelly and his son one time picking up a weird accent.

Myers said while he was from Canada and his wife from Boston, their son, Spike’s accent didn’t include either the tones or their style of language.

“He has a weird accent. I’m from Toronto — I have a Canadian accent, yay — and my wife’s from Boston, but we live in New York City. He has this weird accent,”

reported the observational comedian. The actor/producer, however, didn’t mention what sort of accent his first son had really adopted. Though when Myers imitated his son during the interview, it sounded like a polite English Caribbean accent. Myers said his son almost got a Jamaican thing going on.

Mike during another interview said, Spike also had his father’s sense of humor.

Mike Myers Said His Son, Spike Was His Biggest Fan

Back in June 2018, the sources reported Spike was being the biggest fan of his actor father Mike Myers. When talking with People that year, Myers recalled the day when he introduced his career-defining film, Austin Powers to Spike who was then six years old.

Mike said the day was those crazy summer rains and the father-son duo was snuggling under a blanket. As they were watching one of the films from the Austin Powers franchise, Spike suddenly whispered in his father’s ears saying,

Can I Tell You A Secret?

After that, Myers said his son told him,

The Canadian funnyman then revealed after hearing that from his son he literally couldn’t handle it and felt like someone needed to “stick a fork in him.”

In summer 2018, Mike revealed his then seven-year-old son Spike loved his movie, Austin Powers so much that afterward, he pushed him to make a fourth one. The cringe comedy actor told People that Spike was continuously asking him when the fourth movie for his breakthrough franchise was coming.

Myers said in addition to constant questions, Spike also had a weird suggestion for one of the film characters, Dr. Evil. The youngster reportedly mentioned how his father should make Dr. Evil’s habitat in a sewer instead of an oil rig.

Spike Parents; Who Is His Mother, Kelly Tisdale

Spike’s nesters, Myers and Kelly have been together for more than 17 years. The couple, Myers & Kelly married each other in the fall of 2010. They started dating in 2006. The parents of three kept their relationship as well as marriage secret for quite a time. Even the media didn’t know they had had a wedding until it had been five months since their nuptial.

After the marriage, the couple would become parents to three kids including Spike.

Once talking about his three children, the satirist during an interview said he had always wanted to have a family and that he couldn’t believe how lucky he was to have all of them. He also said being the father of his kids was the happiest time of his life.

During their toddler phase, Myers admits it was really hard for him to leave the house.

The family of five resides in New York.

Spike Myers Father, Mike Myers Is Super Rich; What Is His Net Worth?

Having spent more than 49 years in the movies and over the years, being one of the important leads in blockbuster franchises like Shrek, Austin Powers, and Wayne’s World, among others, Mike Myers is in every way a wealthy actor.

So far, Spike’s actor/comedian father reportedly has rounded up a net worth of over $200 million and it’s undoubtedly a plus point for Spike and his sisters. Also, the summations mentioned above shouldn’t come as much dismay since the patriarch accrued numerous tens of millions of dollars through many of his landmark movies.