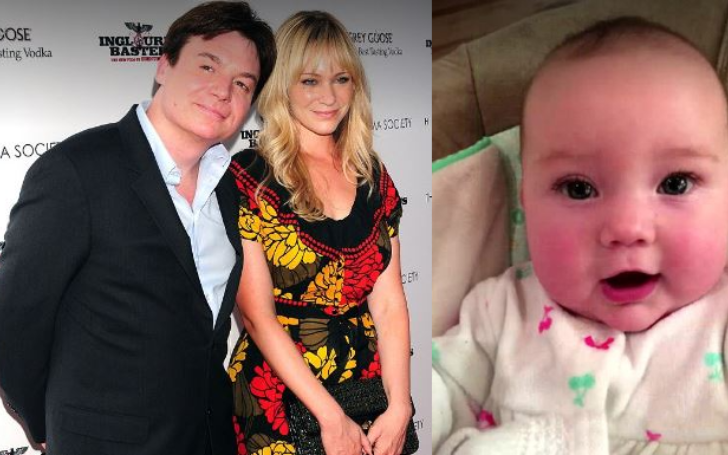 Sunday Molly Myers is the daughter of the Austin Powers actor, Mike Myers, and his wife of over 16 years, Kelly Tisdale. Sunday is the second child and first daughter of the Wayne’s World actor and his spouse, Tisdale.

Sunday’s dad Mike is known for playing parodying spy in the comedy action franchise Austin Powers. He has often stated his kids including Sunday have made him the happiest. The actor at times also shares a few or two funny and memorable anecdotes about his children.

Have a look at those moments in addition to some worth reading details about the celebrity kid, Sunday Molly Myers. See who her mother really is; the joy Mike showed right after her birth, how she’s growing up, whether or not she likes her father’s movies, and more.

What Mike Myers Said After The Birth Of His Daughter, Sunday Molly Myers?

Contrary to her name, she was born on Friday, April 11, 2014. After the birth of his second child, Sunday, Myers said he was the happiest he had ever been in his life. He also revealed that he knew he wanted to be a father. The Canadian satirist revealed he, however, had no idea that fatherhood was going to be that awesome.

Or that my kid would come out so beautiful and lovely,

Right after the birth of Sunday, expressing his feelings to Deadline, the Toronto native said,

“Anyone who tells you fatherhood is the greatest thing that can happen to you, they are understating it. I am the happiest I have ever been in my life.”

Myers at the time was also promoting his directorial debut, Supermensch: The Legend Of Shep Gordon. Although Myers became a father pretty much later in his life, when he did welcome his first and second, he admitted he was loving every minute of it.

He further said, since he had a great father, he always wanted to have a similar experience. Sunday’s grandfather was a Liverpudlian comedian.

Back in 2014 when giving an interview with David Letterman, the Ontario-born comic explained quite a story about his daughter’s moniker, Sunday.

When Myers faced the question of how his daughter’s name came to be, the now 59-year-old said it was because of his and his wife’s hatred of Sunday.

“Me and my wife Kelly hate Sundays—I’m not even kidding—and we wanted to turn it around and make it a good thing.”

As for her middle name, Molly, Mike said it came from his love for his aunt back in Liverpool England who had the same name. Sunday’s father said his aunt to him was more like his grandmother and a guardian angel.

Both of Sunday’s paternal grandparents were World War 2 veterans. They were English immigrants from the Old Swan area of Liverpool, England, and had settled in Canada.

Sunday’s paternal grandmother served in the Royal Air Force while her grandfather was in the British Army. Molly is also a bit Welsh from his father’s side.

How many siblings does Sunday Molly Myers have?

As mentioned above, Molly has two siblings, an older brother, and a younger sister. Her brother, Spike was born three years earlier than her in Sep 2011 while her sister, Paulina arrived in Nov 2015.

According to Mike, Spike was very involved in taking care of Sunday when she was an infant. Though when Sunday was newly born, Spike wasn’t very fond of his sister.

At the time of her birth, Sunday’s brother, Spike was 2 and 1/2 years old.

Who Is Sunday Mother; How She Met Her Father, Mike Myers?

Tisdale married Molly’s father, Mike in the fall of 2010. They met each other sometime in the year 2006, the couple though hid the fact that they were dating for years.

In fact, it wasn’t even Myers who first announce his relationship with Sunday’s mother. Further, even their marriage took some time to get out in the open. As a matter of fact, it already had been five to six months before the outsiders knew Tisdale and Myers were husband and wife.

Myers during an interview confessed his children opened his eyes to the plight of people around the world. In consequence, the actor decided he wouldn’t dwell around the thought of making the world a better place for his kids.

Myers children including his daughter, Sunday apparently have let their father know that they are not totally fond of all of his works. Mike once revealed while his eldest child and son, Spike was a big fan of his Austin Powers movies, his two other children, Sunday and Paulina didn’t like his Shrek films.

Myers stated the three of his children however liked one particular character, Cat In The Hat.

They didn’t really care for Shrek much.

said the father of three before calling his kids tough New Yorkers. Myers added Sunday and his siblings were a tough crowd when they liked something they loved it.

The Wayne Campbell actor also affirmed this when he appeared on Jimmy Kimmel live in May 2022.

reported Myers. The actor further revealed his then 8-year-old daughter was also not very impressed with his book about Canada and that it was very boring to her.

“I’ll say something like, ‘You have to go to bed now’ and my youngest still has baby r’s, she goes, ‘You’re boring.’ What? I didn’t expect that. I wrote a book about Canada called Mike Myers’ Canada.

confessed the Shrek actor to The Jess Cagle Show.

After that, Sunday apparently went to the bookshelf got her father’s book without looking, and slammed it on the ground. Following that she said, “Your book is boring.” She also exclaimed how his body as well as the whole of Canada was boring.

Of that particular behavior of Sunday, Myers said that’s just who his daughter was. While talking to SiriusXM’s The Jess Cagle Show, Myers also admitted he takes the potential script of Austin Powers to Sunday as she is a tough critic.

On the other hand, Myers revealed his son was an absolute fan of his spy comedy films. He also said how his son at times was also annoying him by asking him when he was going to make the fourth Austin Powers movie.

Sunday Knew From The Beginning That Her Father Was An Actor

Myers once admitted he decided to tell about his fame to his kids Sunday, and others quite early in their life.  He explained since people were going to tell them a lot of catchphrases and jokes from the movies their father had been, it was better for them to know why they were hearing certain words.

Myers apparently wondered if his fans would throw jokes around his kids and they wouldn’t have a clue what people were talking about. As such he also mentioned how Danny Harrison didn’t know his father, George Harrison was in the Beatles until he was about 11 or something.

While it is unclear if Myers and his wife, Kelly spoil their children with luxury and extravagant lifestyle, one, nonetheless cannot deny the fact that Sunday and her siblings have it easy when it comes to high ticket way of living.

The fact that Molly’s actor father has a net worth of over $200 million should say it all about how much smooth the Canadian-born actor’s children are going to have in the days ahead.