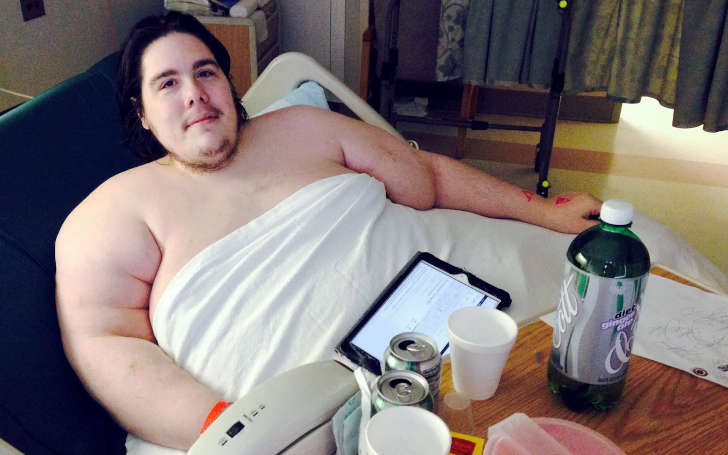 Steven Assanti is a reality television personality who came to the limelight because of his body weight. Yes, you read that right. Steven weighed more than 700 pounds when he filmed for TLC’s My 600-lb Life back in 2017. He has lost some weight since then, however, he still weighs way more than average.

Steven gained wide attention he was in the series due to his love life. At that time, he reportedly fell in love with a woman named Stephanie Sanger. While many of the viewers suspected it was just a publicity stunt, some people say Steven and Stephanie were in love indeed. What is the truth? Are they married?

Let’s discover all the things about Steven Assanti’s life, including his romance, marriage, and more.

Steven Assanti was Born and Raised in Rhode Island

He was born Steven John Assanti on December 2, 1981, in the Rhode Island capital of Providence. He is 40 years old as of 2022. Steven grew up in his hometown, Providence before moving to Texas. Talking about his parents, his father is Steven Veilette while his mother’s name is not revealed as of yet.

“My childhood wasn’t good to say the least. My mom was an alcoholic and my parents’ relationship was pretty rocky. So me and my brother Justin put up with a lot of abuse because of that. It was arguments all the time and fighting.”

Furthermore, Assanti also revealed that their father left their mom because of her drinking habit. At the time he left, Steven was 11 and his brother Justin was 5 years old.

Steven was Foody From His Childhood Days

Steven wasn’t as fat in his childhood as he is now, however, he was always foody. He used to eat all the food that is around him. His brother, Justin told that Steven was very greedy as a child. He added,

“Anytime there was food around, before I could eat it he already gobbled it down.”

Given the fact that his mother was an alcoholic, she didn’t give good care to him and his brother, due to which Steven and Justin developed an improper eating habits. And it ultimately led them to become obese in their childhood.

Steven came to the media after he made his appearance in the fifth season of the TLC show, My 600-lb Life in 2017. He and his brother appeared on the show’s 13th and 14th episodes of the season. Since then, Steven and Justin have appeared in four episodes of the show.

While Steven was close to 800 lbs at the time he joined the show, his brother was nearly 600 lbs. As a matter of fact, Steven had difficulties moving around while his brother had lesser problems, however, he was at high risk because of his overweight.

Besides, Steven initially came into media attention after posting videos of him eating and ranting on online platforms. Moreover, he also made headlines after he was kicked out of a Rhode Island hospital back in 2015.

Assanti Was Kicked Out of Rhode Island Hospital for Ordering Pizza

Back in October 2015, Assanti made headlines after he was kicked out of a Rhode Island hospital for reportedly ordering a pizza. He weighed 778 pounds at the time and he admitted himself to the hospital so that he could fight his ‘eating addiction’ in the Providence hospital.

He stayed at the hospital for a few months during which he was able to lose 20 pounds. However, once he broke the rule of his care plan by ordering a pizza after which he was told he could no longer stay at that hospital. “It’s an addiction and I realize that. And it’s a disease” told Assanti NBC10.

He also revealed that he needed to remain at the hospital until his body weight dropped to 550 pounds so that he could undergo gastric bypass surgery. After the hospital kicked him out, his father said he couldn’t take his son home and said he didn’t know what to do. In his words,

“I just don’t know who to turn to. I called everybody, everybody you can think of in the state of Rhode Island and nobody seems to be able to help me.”

Mr. Veilette finally managed to accommodate his son into the back of his SUV. Furthermore, the father also said that he would keep driving until he finds a permanent solution for his oldest son. Following that, Veilette took his son to ER at Kent Hospital, however, they weren’t allowed to spend the night there.

His Addiction to Painkillers

In the mid-2010s, Steven Assanti made up his mind to lose weight and inspire a lot of people to lose weight and live a healthy life. However, his addiction to food came in between and he couldn’t achieve what he desired. He is addicted to pizza as he reportedly ate up to 6 pizzas a day.

Besides, he was addicted to drugs, especially painkillers. He frequently used the pain in his legs (Lymphadem) to receive a free ride to the nearest hospital and fulfill his drug addiction. Ultimately, Steve’s Obesity doctor in the My 600 lb Life, Dr. Younan Nowzaradan dismissed him from the weight loss program and sent him to a drug rehabilitation center in Downtown Houston.

Even after going to the rehabilitation center, Steven repetitively made his way to the ER to fulfill his drug need. Following such behavior, Dr. Nowzaradan gave him a warning from the State of Texas saying any more drug abuse might take him to prison.

Steven Assanti’s Married Life – Who is His Wife?

In May 2018, Steven Assanti’s life changed forever. Back then, he reportedly got married to Stephanie Sanger. According to Intouch Weekly, Sanger changed her profile picture to one with Steven. In the picture, they can be seen wearing wedding rings. Meanwhile, Sanger captioned the photo as:

“It’s a nice day for a white wedding. Just married Stephanie Assanti and Steven Assanti – cross my heart and hope to die to my lover I’ll never lie. It’s just him and I.”

The outlet also mentioned that the lovebirds had been showcasing their love after Valentine’s Day 2018. On February 28, Steven took to Facebook to write about his then-girlfriend. In the since-deleted post, Steven wrote,

“Good morning friends and to the best girlfriend in the world Stephanie Sanger I love you baby with my soul n heart. I want everyone to continue to know you’re the reason why I look forward to my future, our future and I hope it grows bigger, your the best baby real talk keeping ten toes down fellas…have a good day…1…”

“I am truly blessed, so lucky to have found a soul that matches mine so completely We have so much to look forward to and I love you, you are my happiness  Thank you baby boy.”

Meanwhile, many people doubted that they were married or even in a relationship. One of their followers wrote in the comment as “Is this like a catfish ordeal lol…have u even met her?” Likewise, another user wrote, “Have u and Stephanie met yet?”

Nevertheless, we hope Stephanie and Steven are happily married as of now and they continue to flourish as a married couple.

Assanti contracted Covid-19 in late 2021. According to his social media post, he suffered from the virus in December 2021 when he also suffered from pneumonia. A couple of days later the first post, Steve gave an update to his fans saying he still had covid/pneumonia. In a lengthy text he wrote alongside his photo, Steve thanked his fans for all the prayers and speedy recovery wishes.

Many people have been wandering to know Steven’s whereabouts, however, he has been out of the media for a couple of years. He hasn’t been frequent on social media as well. Steven keeps sharing posts on his Instagram, however, he rarely gives insights into his life through his posts.

As a matter of fact, during a 2020 interview, Steven said that being in the media limelight caused friction in his married life. Given that Steven wasn’t able to lose much weight in the show, people still believe he lives the same obese lifestyle.