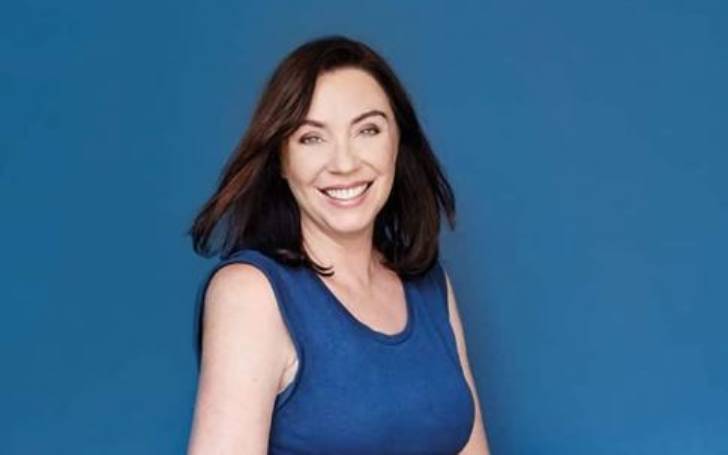 Stephanie Courtney, 52, is an actress and comedian widely recognized for her work character Flo in TV and radio commercials for Progressive Corporation. She began working with the company in 2008 and is still going strong.

Besides this, Courtney was one of the main members of the Groundlings Theater located in Los Angeles. Born and raised in NYC, Stephanie moved to LA for better opportunities and LA surely treated her well.

And while most of her work is known to the public, not much is revealed about her other personal details. Here, find out more unknown facts about Stephanie Courtney and her lifestyle. Also, who is her husband? Is he famous as well? Find out everything about the couple down below.

Stephanie Courtney Was Born And Raised In New York

Stephanie Courtney was born on 8th February 1970 in Stony Point, New York, the United States, and turned 52 years old in 2022. She was born as the youngest of three to a singer mother and a high school teacher father.

Upon graduating from North Rockland high school, Courtney enrolled and graduated from Binghamton University and earned her degree in English.

She then moved to New York City and worked as a secretary for Robert F. Greenhill. During this time, she took acting classes for two years at the Neighborhood Playhouse whilst living with her sister Jennifer Courtney.

Jennifer is also an actress by profession. The two sisters even co-wrote and performed the sketch Those Courtney Girls at the Aspen Comedy Festival as well as in Los Angeles.

Stephanie Courtney Has Been Working As Flo Since 2008

If you’ve heard about the Progressive Corporation then you’ve surely heard of the telegenic pitchwoman Flo. But did you ever wonder about who is behind all the signature semi-bouffant hairdo, white uniform, and bright red lipstick, it’s none other than our comedian Stephanie Courtney.

After almost over a decade of working and producing ads as Flo, Stephanie is still the ‘IT’ girl of the commercial world. Not to forget, Progressive’s business jumped from $13.6 billion to almost $30 billion after Flo’s debut in 2008.

Talking about the company, The Progressive Corporation is the third largest insurance carrier and the no.1 commercial auto insurance company in the US. They basically use Flo as their advertisement head to commercialize the benefits of getting PI.

Flo was later turned into Flo’s universe adding Jim Cashman as Jamie, an awkward fellow Progressive team member, and Bill and Tom, a rival insurance salesman. Though Bill and Tom were discontinued after a series of lawsuits.

Stephanie Is Also An Actress & Has A Handful Of Acting Credits

Although Courtney’s whole career is based on Flo, she also works as an actress and comedian side by side. Before landing Flo in her pocket, she even worked odd jobs in order to support herself.

During the initial phase of her career, she starred in a few films and TV shows like Melvin Goes to Dinner, For Your Consideration, Blades of Glory, The Brothers Solomon, The Heartbreak Kid, and a few others.

Similarly, she has over a dozen of television series credits which include Tenacious D, The Man Show, Significant Others, Faking the Video, Without a Trace, Mad Men, The Jay Leno Show, The Goldbergs, and Mike Tyson Mysteries.

Her upcoming project Wags to Riches has completed the shoot and is all set to air. She will be playing Stephanie in the show.

Who Is Stephanie Courtney’s Husband? When Did She Marry?

The 52-year-old is married to Scott Kolanach since 2008. Her husband is a New York-born director working as a lighting director for The Groundings comedy theater. He is mostly popular for his work in the 2012 film Janeane From Des Moines.

The parents of one first met on the set of The Groundlings where Stephanie was one of the main members and Scott was a director. Their marital ceremony was on 25th November of 2008 when Courtney was 35.

Stephanie welcomed her bundle of joy, a son when she turned 40. Regarding her late success in both her career and her family life, Courtney says,

“I booked Flo when I was just about to turn 38. I got married at 35. I had my kid at 40. I’m a late bloomer. But it tastes just as sweet when it’s late. I definitely was a calmer person getting these things later in life.”

Back in 2017, people called out on United Airlines’ customer care service after they violently dragged the then 69-year-old Asian man from an overbooked flight. It is believed that the old man was a doctor by profession.

This incident came in just two weeks after the airlines declined two teenage girls into the flight just for wearing leggings. Their slogan “Fly the Friendly Skies” was mocked back then as well.

During this chaos, Stephanie’s husband Scott decided to use his voice and platform and rage against the unacceptable treatment. He took to Twitter and wrote,

His tweet was accompanied by a mockery logo of United Airlines with two stripes of blood addressing their violent behavior.

Stephanie Courtney Earns $1 Million Per Year- What Is Her Current Net Worth?

2007 was kind of Courtney’s year. After doing a handful of odd jobs and appearing in films and TV shows in minor roles, her career blew off when she landed Flo.

As for now, she reportedly pockets $1 million annually for her role at Flo. She had been playing the character for over a decade now.

Well, when you add up a decade-long experience, residuals for current commercial airings, and an exclusive buyout that precludes them from taking other jobs, she is likely to get paid at least $2 million in today’s time.

Moreover, Stephani’s current net worth is around $6 million in 2023. Besides, her other commercial work credits are Skittles, General Mills cereal, Wienerschnitzel, and others.

Despite her career in TV and the internet for over a decade, she is not active on any social media platforms.