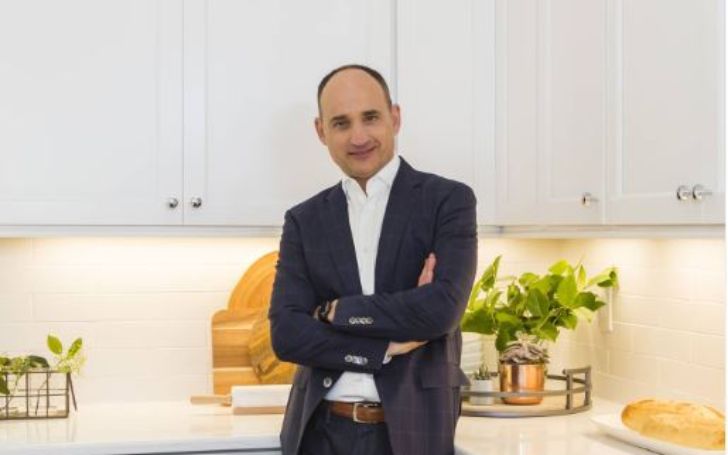 David Visentin is a realtor and a reality star who is known for HGTV’s Love It or List It (2008), TV One’s Makeover Manor (2013), and HGTV’s Brother vs. Brother (2013). Visentin has been in the real estate business for more than 20 years and doesn’t have any doubts about what he is meant to do. He helps to find that homeowner a new house that can then become their new, ultimate dream home.

Along with his another equally famous HGTV’s Love It or List It co-host, Hilary Farr, Visentin brings his dynamic selling skills and negotiating talents to the show. The two also battle with their wits that keep millions of viewers tuning into “Love It or List It.”

This under-the-radar, Toronto-produced show has been so popular that it has spawned spinoffs and made stars of Visentin and Farr. Know more about the top real estate agent, David Visentin in the segments below; his family, career, relationship, and more of the same.

Almost All Of David Visentin Family Members Are Realtors

David who was born in June 1965 and grew up in Toronto, Canada comes from a family of experts in the house and property business.  His father is a broker who used to run a successful company of his own for many years.

David, who is presumably five-foot-eleven to six-feet tall, additionally also worked with both his brothers who are also realtors.  Further his sister also has a real estate license.

Similar to his co-star, Hilary, Visentin also had a bit of the acting bug in the past. He did high school theater and was also on a television show called “My Parent’s House.”

David’s sister and both his brothers had also done theater.  The now 57 years old Visentin once said it was because of that he was able to make it as a celebrity realtor.  It apparently was a dream extension for him to take his real-estate skills and confidence in front of the camera and put them together for the show.

Visentin got into real estate after watching his father run a successful company of his own for many years.  It began in 1987 when David joined Country Living Realty, a Rosemont-based company owned by his dad.  And it was there that David took up a deep-seated interest in selling properties — and he hasn’t looked back since.

After more than two decades in the industry, the realtor landed a job to help homeowners find their dream homes on Love It or List It. David actually got onto the show through his sister who used to work for a network.

She gave him a call as they were auditioning real estate agents for a new show, and they hadn’t found one yet. She, henceforth approached her brother, Visentin, and told him said, ‘Hey, David, you should go down and audition.’ Recalling the audition process, the Toronto-born property expert said of the producers,

“They called up and said, ‘You’re brilliant. We want you. We think you’re going to make Hilary look good.'”

David says had there is nothing else he’d rather do than real estate and television.

Who Is Visentin Married To? Does He Have Children?

David has been husband to his wife Krista Visentin since 2006 with whom he also shares a son. Visentin’s wife is in the same industry as her husband – and is a real estate agent herself; she is also a Canadian.

She apparently focuses on property sales, rentals, and management, and reportedly is also quite wealthy. Visentin and his wife, Krista married in October 2006, two years before the show, Love It Or List It aired on television, and had their first child, a son, Logan in March 2011.

The now 56 years old Visentin says the birth of his son and the look on his parents’ faces when they saw him for the first time has been his proudest moment. While Visentin is one of the most popular figures on HGTV, the detail about his marriage is quite a closed book in itself.

David, his wife, and son currently live in Barrie, Ontario, and tend to keep their relationship and home life private.

Is David Visentin Friend With Hilary Farr? Do They Get Along?

Hilary Farr and David Visentin do have undeniable on-screen chemistry, there is also a friendship between the two, in reality, something that each of the hosts has confirmed on several occasions.

Though David and Hilary seem like total opposites and they don’t try to hide the fact that they’re pulling out all the stops to be the winner. However, behind the screen, they, obviously, have an enormous amount of respect for each other. The duo is friends as well as colleagues.

Visentin once while talking on The Real Estate Talk Show, said,

“Hilary and I have a lot of fun together, and I think people enjoy watching us having a lot of fun.”

Farr also has only good things to say about her relationship with cohost Visentin. As such in an interview with Streets Of Toronto, the British-Canadian designer said,

“There’s genuine deep affection between us and a really good, genuine, healthy competition … what you see is what you get. We do bicker, are exact opposites. We adore each other and make each other laugh a lot.”

In fact, Farr once told Baltimore Media Blog that one of her favorite parts of working on the show is simply spending time with Visentin. They originally met at the Love It or List It Audition.  Hilary had already secured her part while David landed his role after competing with a group of potential agents.

David Love It or List It co-star, Hilary Farr is an interior designer and renovates a homeowner’s current house in hopes of making it their dream home.

Despite being best friends with Hilary who is also a celebrity designer, Visentin once said he doesn’t think that Farr would be the right person to ever redesign his home. While talking to Monsters & Critics, the Canadian realtor stated Farr is an incredible artist with a great eye and a strong team working with her to make clients’ dreams come true.

Visentin assumes they might be better off not working together because the duo would end up bickering over every little thing, which would likely stop the project in its tracks.

David lastly added his beloved cohost might be probably “too busy” to focus on redoing his home regardless.

Who Is Richer, David Or Farr; What Are Their Net Worths?

Considering how long David and Hilary have been TV stars, it’s unsurprising to learn both Hilary Farr and David Visentin are sitting on massive fortunes. Not to mention they each have their own lucrative pursuits elsewhere.

Celebrity Net Worth reports interior designer Farr has amassed an incredible net worth of $8 million thanks to “Love It or List It” and her successful business, Hilary Farr’s Designs.

Farr’s costar Visentin, on the other hand, is slightly less wealthy. Celebrity Net Worth puts him as a man with a net worth of around $6 million. And this seems plausible in that unlike Farr who has a lucrative side hustle, Visentin earns the majority of his money from “Love It or List It.”

Their salaries for the show, nonetheless, haven’t been made for the public’s acknowledgment. However, in 2019, CheatSheet estimated the hosts earn hundreds of thousands of dollars per episode.

Understandably, the longer “Love It or List It” continues, the more Farr and Visentin stand to make from it.

Although there is an Instagram handle with the name David Visentin, it is unclear if the profile actually belongs to the Canadian real estate agent. Further, the account hasn’t seen any post-update since June 2015. Having said that it apparently seems Visentin no longer has a preference for social media games. Or he just likes to keep his life to himself.

David once admitted not buying Google or Apple stock, in the beginning, is his greatest regret.

Visentin also loves sports which he has been interested in since childhood. Speaking with W Network, the reality star said his dad was very athletic and was playing soccer even at the age of 79.

He reportedly swims competitively and also does triathlons.