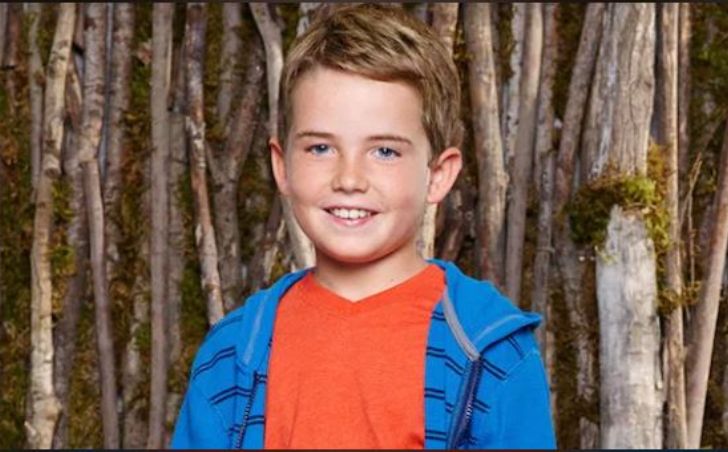 TLMS is one of those shows that is comfortably long. And viewers who only watched the earlier seasons of the show might have found it surprising to see that Boyd looked quite different on the show’s final days.

Morrison appeared as a series regular in the role of Boyd Baxter for a couple of seasons but another young actor substituted him and the show didn’t give much explanation. Add to that, Morrison has hardly been on the media discussion ever since. Read what he is doing now in the details below in addition to some more follow-ups from his life post The Last Man Standing Departure.

The former Last Man Standing actor was born on March 17, 2005 (age 17 years) in Los Angeles, California. By the young age of nine, Morrison already had an impressive list of credits to his name.

Within six months of his acting career, he appeared in numerous commercials, including for Walgreens, Meijers Department Stores, Subway, Shriner’s Hospital, and Google.

Morrison helmed the role of Baxter’s grandson Boyd from 2012-2017, ending up in exactly half as many episodes as the show’s other stars, Molly Ephraim (and Allen, and Nancy Travis, Kaitlyn Dever, and Hector Elizondo).

However, after the show’s sixth season, the only person that joined Morrison to not continue the role in the show was Ephraim. Ephraim portrayed one of Tim Allen’s daughters, Mandy. The news first aired in July 2018.

Why Did Morrison Left The Last Man Standing?

TVLine reported Flynn and Molly themselves opted not to return for Season 7. Cinemablend, however, said there were no specific reasons at least that the two actors shared.

It though is believed new career paths could have possibly played a role. Ephraim, for example, had just landed a role in the 2018 movie The Front Runner about former U.S. Presidential candidate Gary Hart.

Some on the other hand said the main reason behind changing Morrison to Jet Jurgensmeyer for Boyd was so the show’s writers could age up the character and create slightly meatier storylines.

How Flynn Morrison Started Appearing Less On The Show?

At the end of Season 6, Morrison’s character, Boyd was still a tween getting into trouble. However, when the show came back for Season 7, Boyd while still a part of the show, Morrison, the boy who had been playing him on the show was missing.

The show had quite subtly replaced him with another preteen actor Jet Jurgensmeyer who was certainly a different actor and definitely older than the character Morrison had been playing up until the show’s sixth season.

It left some fans in the confusion, but not for very long. Not only did the show stop featuring Morrison as Boyd, but even the character itself got less screen time or mentioning as the show neared towards its finale.

Why Flynn’s Character, Boyd on ‘Last Man Standing’ Went On To Have Fewer Screen Appearances?

The exec producer, Kevin Abbott revealed the reasoning for Boyd’s sudden disappearance was down to the fact that there were only so many storylines to go around.

As the show progressed Boyd simply wasn’t around very often. While Boyd was a fixture of the show’s earlier seasons, in the latter times he was more of a recurring character who popped in every once in a while rather than the main character.

The show definitely highlighted more of Mike’s life and the relationships he had with his own kids. Last Man Standing’s final season made many people wonder whether or not Boyd was going to show up in any of the episodes, more specifically the finale.

Soon after the reports that the show was going to end, some fans questioned why the remaining characters only sporadically mentioned Boyd. The fans had last seen Jet Jurgensmeyer playing Boyd at his parents’ gender reveal party in Season 8.

Flynn Himself Had Replaced The Actors Who Formerly Played Boyd

While The Last Man Standing did replace Morrison with Jurgensmeyer for Boyd during the original run of the show, it wasn’t the first time they had changed the face for the same character.

And it was following that, Morrison had taken over the role for Seasons 2-6. It was at the start of the second season that Flynn came into the show as Baxter.

His portrayal of Boyd, however, lasted only until the sixth season. It was also the point where the show’s original network, ABC declined to renew it. The Last Man Standing, fortunately, got a new studio, Fox, who picked it for Season 7.

Though this came with a few cast changes, including Mandy, Carol (the Baxters’ neighbor), and, of course, Boyd.

As mentioned, part of the reason that Boyd started appearing less on the show and the actors that played him disappeared was because they all started getting occupied with other endeavors outside the show.

For instance Jet already had quite a full resume under his belt before landing the part of Boyd; he had a recurring role on Black-ish and voiced characters on T.O.T.S. and Shimmer and Shine. He additionally played a young Jason Bateman in Season 3 of Netflix’s Ozark.

As for his predecessor, Morrison, the teenager hardly has had any other credit except Pretty Little Liars and The Last Man Standing.

Where Is Flynn Morrison Now; What Does He Look Like?

Although few appearances, Flynn was able to become memorable for a certain percentage of TLMS fans. However, after his sudden departure from the show, Morrison turned into an exhaustive unheard-of celebrity.

Also anonymous are the specifications about his parents or his at this moment undertakings.

The obscureness of the young boy is so weighty that there’s not even a definitive answer as to what the 17-year-old currently looks like.

Does Flynn Morrison Have Social Media?

While he does have an Instagram handle, Morrison doesn’t seem to be extensively on the go on the platform.

Further, the young actor gives the impression as the guy who likes to share a lot less about himself and rather parade the picture of his dog.

How Rich Is He; What Is His Net Worth?

In consideration of his less than a few acting credits, it might be an overstatement to assume the Californian-born Morrison had bulky payoffs from his recurring character career much less a short-lived one.

What does seem highly unlikely is him getting salary as much as the TLMS mid-tier casts such as Nancy Travis, Kaitlyn Denver, Amanda Fuller, Molly Ephraim, & others.

Morrison nonetheless must have enjoyed some above the average pay that children his age procured at the time. Then again it might be a while before the stories about his net worth start appearing in the extra editions.