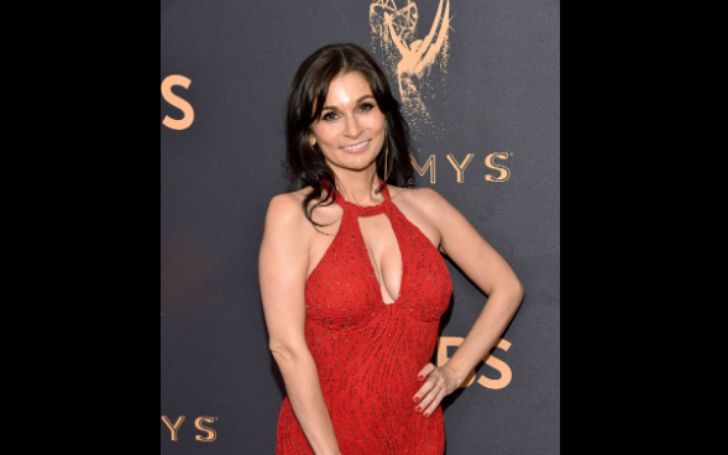 Julia Haart rose to fame after the Netflix series, My Unorthodox Life, aired in July 2021. She faced plenty of criticism for the show – mostly because it highlights her journey from being a Jew to not being one. The show’s all about Julia flaunting her fabulous and expensive lifestyle as a fashion designer, entrepreneur, and CEO.

On the contrary, having a sumptuous lifestyle isn’t the only thing she’s known for. Today, Haart is known as the QUEEN of lawsuits – she’s had multiple ones against the company that fired her from the position of CEO. As if this wasn’t enough, her so-called ex-husband also presented a lawsuit against her. So, what’s the story behind these controversies?

The following article brings you all the answers. Where is Julia Haart today after facing such great controversies? Is she still working? Let’s find out!

Julia Haart’s Birthplace Wasn’t America; Details On Her Life As A Jewish Girl

51-year-old Haart was born on 11th April 1971 in Moscow. Her parents were observant Jews. Therefore, by birth, Julia is a Jew.

At the age of 3, she moved to the US with her family. Haart lived in Austin, Texas till she was in grade 4. There, she attended a private school where she was the only Jew. Following this, the immigrant family moved to Monsey, NYC to be closer to their Jewish roots.

Her move from Texas to New York came off as a great cultural shock to Haart. Her father and mother grew more religious and were close to the Haredi community. This community consisted of a large number of orthodox Jews. In addition, she was also sent to a Jewish school – Bais Yaakov in Brooklyn.

After graduation, instead of working on getting into college, young Julia was sent to Israel to attend a girl’s seminary for a year. Upon her return, she was ready for shidduchim, or “arranged dating”. Furthermore, she was just 19 years old when Julia first got married.

This Fashion Designer Left the Haredi Community At 43 Years Old

This former CEO of a modeling agency lived as a Haredi Jew from the 1900s till the early 2000s. However, she was extremely uncomfortable with her own community. Furthermore, as a mother of two daughters, Julia wasn’t ready to let the community do things to her little girls as they did to her.

“They were doing to her what they had done to me — trying to push her down and mold her into that flat person that they could disappear. I couldn’t let that happen.”

In addition to this, she was also suffering with her mental health while being a part of the community. Even more so, Haart had thought of giving up and taking her own life because of the orthodox environment. Therefore, it was about time she left it behind for her own good.

So, Julia left the Haredi community in 2014. She was 43 years old and a mother of 4 children at the time.

Harrt’s Had Multiple Names Throughout Her Life

At birth, Haat’s parents gave her the name, Julia Leibov. She carried this name till she was 18 years old – at 18, she changed it to Talia. According to her ethnic background, “Talia” was a more Hebrew-sounding name than Julia. Moreover, this name was given to her to attract a match.

After a year, she got married to a man named Yosef Hendler. Thus, her name now became Talia Hendler.

Furthermore, after divorcing the man she first got married to, and after leaving the orthodox Jewish community, Talia changed her name back to Julia. In addition, she also changed her last name to “Haart”, which was a homage to her maiden name.

Julia Has Worked As A Designer And CEO; A Look Inside Her “Fabulous” Career

Right after leaving her Jewish culture behind, Haart started working in fashion. She thus began her career in 2013 as a designer by opening up a shoe company, Julia Haart. The fashionista partnered with a ski boot engineer and a German company to create the best possible shoes that are both fashionable and comfortable.

Furthermore, after 3 years, in 2016, Julia collaborated with La Perla, an Italian high-end brand. Through this, she worked to create the company’s Spring and Fall accessory collections. Following this, she was given the title of “creative director” for the brand by her then-husband, Silvio Scaglia. Apparently, he was the owner and president of La Perla at the time.

This brought a lot of fame and fortune into the life of this shoe designer. Only after a year, Talia (aka Julia) became famous for designing the 2017 Met Gala dress for Kendall Jenner.

Similarly, in March 2019, she succeeded to become the CEO and Chief Creative Officer of a talent-media company, Elite World Group (EWC). In this case, as well, Haart was nominated and voted for by Scaglia, the owner, and her ex-partner. To add, she became the creative director of e1972 – a luxury brand launched by EWC.

Haart Is Also The Star of “My Unorthodox Life”

My Unorthodox Life is a popular Netflix series based on the life of Julia Haart. The show typically focuses on the personal and professional life of this fashion mogul. In addition, it shows how she is adjusting to that glamorous life after leaving her super-orthodox Jewish community.

The first-ever episode of Julia’s Netflix show aired on 14th July 2021. It was literally the “talk of the town” back then, receiving all the negative as well as positive criticism. Typically, the Jewish or Haredi community was against Haart coming up with such a show that drags the religion’s name through the mud.

Regardless of this hate, this fashion designer did not stop. She is all set to release the 2nd season of the reality show this year, in 2022.

In 2022, She Was Fired From Her Own Company; Details On Her Lawsuits

In January 2022, Haart was unfortunately fired from what she called her “own” company. The EWC fired her from a position she worked in for years. So, what was the reason behind it?

As it turns out, the agency accused Haart’s then-lover, Silvio of company embezzlement. This further led to the termination of her role in the company. The whole event was out of the blue and even the CEO herself did not have any clue about it.

However, after this, she wasn’t going to let this go without a fight. She claimed in a lawsuit that she owned half of the EWC company. According to her, Silvio had named her the co-owner and CEO after they got married in 2019. Nevertheless, upon further investigation, it was found that she in fact did not own 50% shares of the company.

Thus, this left Julia broken and jobless. Thankfully, her reality show, My Unorthodox Life is still there. Rumors say the 2nd season of this show focuses on these lawsuits and her controversial divorce from Silvio Scaglia.

This Ex-Jew Has Married Twice; Is She Still Married?

We have already mentioned before that Julia Haart was “arranged” to marry a Jewish man when she was very young. At just 19 years old, this ex-CEO married Yosef Hendler – a senior from school. We aren’t quite sure how long this marriage lasted, but we do know that the former Jewish couple has 4 children together.

Similarly, a new love interest arose in the life of this designer when she met Silvio Scaglia in 2016. At that time, he was the owner of La Perla, where Haart was the creative director. The couple was together for quite some time before tying the knot in June 2019.

However, this 2nd marriage did not last long. After being kicked out of EWC, Julia filed a divorce against Scaglia in February 2022. This led to the pile of lawsuits which we will discuss in the next topic.

As of 2022, there aren’t any rumors of Haart having a new lover. She recently has had a lot on her plate, so we can guess that she could be staying out of the dating game for some time.

Haart’s “controversial” divorce from Silvio Scaglia; Did He Actually Sue Her?

After being fired from her job as the CEO of EWC because of Scaglia, Haart filed a divorce against him. As if this wasn’t enough, this invited a pile of lawsuits further.

Furthermore, after the judge declared that Haart did not own 50% of EWC, she filed a lawsuit of $257 million dollars against her then-husband. This suit accused Silvio of “defrauding her out of millions from their business”.

In addition to this, she even accused him of “egregious, bullying, and unauthorized conduct” since he blocked her access to Julia’s own office, cut off her corporate cards, shut off phone services at their home, and fired her assistants. Moreover, she also claimed that he became more volatile and abusive towards her and her 4 children.

However, this did not go as per Julia’s plan. Her accusations and claims were ruled out to be false later on.

Similarly, the star of My Unorthodox Life was also previously accused by her ex-partner of having misappropriated $850,000. In other words, he claimed that she took the money from the company’s account. The lawsuit existed for almost 9 months before Scaglia withdrew it in December 2022.

According to US Weekly, Julia said,

“I believe the fact that Silvio withdrew these cases with prejudice, meaning dismissed permanently, on the day discovery was due, speaks volumes. No money was paid by me and I intend to continue to pursue my fraud and defamation litigation against Silvio and others named in those cases. Now my focus and priority is to heal through the strength and support of my family and to continue to build businesses that will empower others.”

She sure is a determined woman who will not let go of things that easily.

Batsheva, Shlomo, Miriam, and Aron are the four wonderful kids of this reality show star. Batsheva and Miriam are Haart’s two daughters. They have even taken up their mother’s name. Similarly, Shlomo and Aron are her sons – we do not know about Shlomo but Aron is in high school as of 2022.

This mother of four shares a wonderful bond with all her four kids. They even appear constantly in their mom’s Netflix reality show.

So, Where is Julia Haart Today? Does She Still Work?

So, the only question left now is, where is Haart today? After facing tons of lawsuits with her former company and husband, she has gained quite fame. On top of all this, she is a star of a reality show which is all set to release its 2nd season. Therefore, we believe that Haart is focused on just that as of today.

Similarly, after the divorce, Julia got the exclusive rights to have her and Silvio’s penthouse apartment. It is a lavish flat that can be rented for a huge amount of $125, 000 per month. Thus, she rents it today and lives in a different home with her kids; it isn’t certain where she actually lives today.

Furthermore, with her successful career as a designer, ex-CEO, and reality show star, Julia Haart has a whopping net worth of almost $500 million. She sure is living that fabulous and great life.

What is Delle Bolton doing now? Her Husband, Kids, Cause of Death, Now