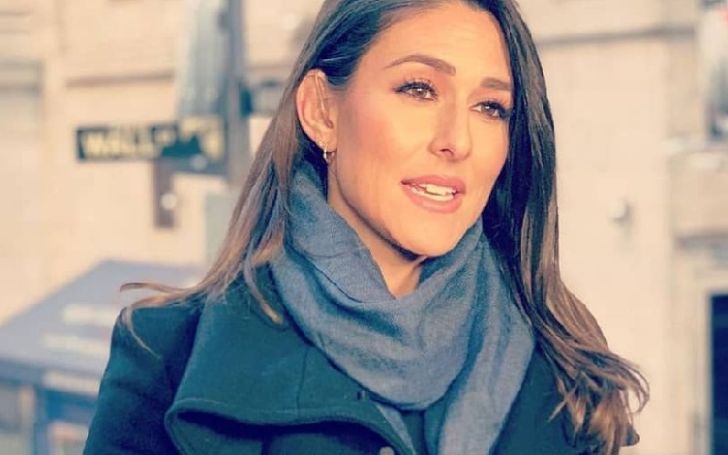 Erielle Reshef is a Heartland Emmy Award Winner American News-Correspondent and News Caster. She is an accomplished journalist who is currently working as a correspondent at ABC News.

Besides her profession, Erielle is a happily married woman. She has been married to her husband Daniel Frankenstein since 2010. Well, being married for such a long time, do the couple share any children?

Today, let’s find out every personal and professional detail about the ABC Correspondent Erielle Reshef. Here we go.

Who Is Erielle Reshef? Her Bio And Nationality

As said earlier, Erielle is a journalist. She was born on the 23rd of September 1983, in Houston, Texas, the United States. As of 2023, Reshef is 39 years of age. After her birth, she spent most part of her early life in different places like Birmingham, Alabama, Louisville, and Kentucky due to her father’s medical career.

Besides, as for nationality, she is American by birth and is of Jewish ancestry.


Talking about her parents, her father Dr. Eli Reshef is an acclaimed fertility specialist. As per Reshef, her dad is one of the most sensitive doctors, and regarding this, she told,

My dad is my hero, quite simply. He has unmatched integrity and fierce devotion to his patients. In a medical field of heightened emotion and anxiety, he handles each case with the utmost sensitivity and compassion.

According to the news anchor, despite being in such a hectic profession, both her parents gave her the best upbringing and stated,

“My brothers and I were raised in a household steeped in Jewish values – where our parents instilled the importance of an unwavering work ethic,

We learned at a young age the spiritual responsibility of tikkun olam, or ‘repair of the world’. My parents fostered an environment where giving back was essential, and recognizing how very blessed we are was paramount,”

Today, the Houston-born Reshef is in her late 30s, and she still gets strong support from her father and mother.

Further, she completed her master’s degree in diplomacy and conflict studies from Israel’s Reichman University.

Erielle Reshef Is A Correspondent For ABC: Her Career Detail

Since 2017, Reshef has been working as a correspondent for ABC news based in New York City. During these 5 years, she has made contributions to almost all of the ABC News shows. From being an anchor for ABC News Live Prime to the host of news headlines for Good Morning America 3, she has filled up every anchor desk.

Prior to ABC News, Erielle was a morning anchor for KOCO 5 News (ABC affiliate) in Oklahoma City. For her service in KOCO as a writer, anchor, and producer of the 30-minute special KOCO Chronicle: The Investigation, Conviction, Sentencing of Daniel Holtzclaw, she won a Heartland Emmy Award.

Moving back and talking about her beginning, she started her journalism career as an anchor and reporter for IBA English News, Israel Channel 1-TV. In her journalism career, she has interviewed international personalities, from former Israeli PM/President Shimon Peres, Egyptian President Hosni Mubarak, to rock legend Ozzy Osbourne.

As an influential anchor and reporter, she is associated with big names and big brands which is one of her achievements. Erielle serves on the board of the OU School of International Studies and even delivered the keynote address at the school’s convocation in 2014.

Further, Reshef also got a vote for OKC’s Best Anchor from the readers of Slice Magazine. She has worked as a Media Training Faculty Member for Oklahoma County Medical Society Leadership Academy.

The accomplished ABC correspondent, Erielle Reshef is married to a San Francisco native Daniel Frankenstein in an intimate wedding ceremony. Reshef and her husband, Daniel exchanged vows on May 30, 2010, and coming up to 2023, it’s already been 12 years since their wedding.

On their 12th wedding anniversary, she shared her a photo with her spouse on her Instagram and wrote,

The now-married duo first met in the year 2003 and immediately started seeing each other. The pair then stayed in a live-in relationship in Israel for a while when Reshef was studying for her graduate degree. Besides, her then-boyfriend even inspired her for her career in the beginning, and still today, Erielle considered her husband to be her great supporter and soulmate, and they together with their children reside in New York.

She Considered Her Husband Daniel, A Renaissance Man

While talking to Luxiere magazine, she didn’t get tired of praising her husband’s quality. According to her, Daniel is an absolute husband material and her soulmate. Despite serving as the co-founder of a venture capital firm all day, he greatly manages time for his family as a renaissance man, skilled at all tasks. Erielle said,

“By day he is the co-founder of a venture capital firm and By night, he is a top notch chef and the most devoted hands-on dad. He is my chief cheerleader.”

“We often stop to marvel at the life and family we have built together. Daniel’s kindness, empathy, humor and optimism are infectious…He is my match in every way – without a doubt – my soulmate.”

The married couple shares a great bond with each other.

From her more than decade-long marriage, she became the mother of two sons named Mayr Reshef Frankenstein and Mavryk Julius Frankenstein. Mayr is her first child born on April 11, 2015.

In the year 2022, Erielle and her husband together with their eldest son Mayr celebrated his 7th birthday. Reshef also shares those moments on her Insta and wrote,

The light of our lives is 7! HAPPIEST birthday MayMay 🐻. You are everything – kind, thoughtful, loving, brilliant, stubborn, inquisitive and full of endless joy!
I simply marvel that I’m you’re Mommie.
(I may be on assignment far away but I am going to squeeze you EXTRA tight soon!) Keep shining! 💫🌟💛

Likewise, her younger son Mavryk was born on July 30, 2019, which makes him 3 years old as of 2023. As per her momma Reshef, little Mavryk is “a firecracker, feisty, hilarious, loving, free-spirited, snuggly, strong-willed, and a rockstar”. This little baby is interested in singing.

The ABC journalist is hugely active on her Instagram account with 26.8k followers. On her Instagram, most of the posts and videos are related to her profession and few are of her personal moments with her family and friends.

Further, Reshef is also on Facebook with 19k followers. On her Facebook too, she shares mostly about her personal and professional life. In addition, Erielle is also on Twitter with 13.5k followers.

Erielle earns an average salary of $80,000 per year from her successful journalism career. Counting on this, her net worth is believed to be around $400,000.