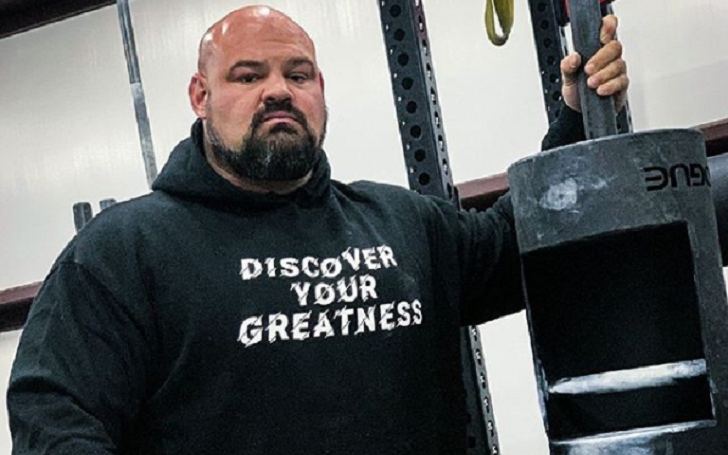 Brian Shaw is an American strongman who has won several major competitions. Outside of his career, Brian remains secretive when it comes to his love life.

Today let’s find out if Brian is married to anyone, if yes, then who is Brian Shaw’ wife? In the meantime, also know if the strongman has children?

Find out many unheard facts about his love story!

Is Brian Shaw Married? Who Is His wife?

Shaw has been in a wonderful marital relationship with Keri Shaw for a long time now. The couple tied the knot on 4th July 2015. Sources reported, that they walked down the aisle at the Estes Park Resort, Colorado in front of their families and friends.

The power couple is leading a strong matrimonial relationship ever since. Both of them are supportive of each other. When Keri married Shaw, she had gone through a tragedy in her life as her first husband Jenkins passed away. Thankfully, Brian was there to support her.

How Did Brian Shaw First Meet His Wife, Keri? Their Engagement

According to sources, the two first came across a year before their nuptials, at a party, where Brian was the guest. They subsequently began their affair.

Sometimes later, Brian and Keri got engaged on 21st December 2014. Brian Shaw’s wife Keri often shares throwback photos from their engagement on her social media handles. She uploaded the image with a lengthy caption celebrating their 4th anniversary in December 2018.

Does the pair have any children?

Well, Brian from his marital relationship has two kids. They welcomed their first child, a son Braxton Shaw on 14th June 2016. The strongman announced the big news via Insta just a day after his birth. He captioned it,

“My wife and I welcomed our son Braxton to the world yesterday!! He is everything I could have ever asked for and I couldn’t be more proud of him or my wife as she handled it all like a champ! Thank you all for your well wishes as it means so much to me and my family!”

Their second boy Kellen James Shaw was born on 3rd May 2018.

Brian and Keri both have posted a number of adorable photos of their boys on social media. The family of four enjoys it a lot. Both Brian and Keri take out time from their busy schedule and spends quality time with one another. From dressing up for Merry Christmas to taking their kids to the gym, they do it all.

Brian currently resides in their new home that features two master bedrooms, a giant kitchen, a giant walk-in shower, as well as a large gym. Sources suggest, the couple also owns a house in Brighton, Colorado.

Brian’s spouse Keri is a fitness lover. She grew up playing all kinds of sports but always struggled with her weight. She later maintained her body by doing some exercise on daily basis and also followed intermittent fasting for some time.

Prior to his relationship with Keri, Brian was not married, however, his wife Keri previously tied the knot with Mike Jenkins. They exchanged their vows in March 2012.

The two were married until Mike’s untimely death on 28th November 2013. He was just 31 years old at the time of his demise. Keri was the first to break the sad news on her Facebook. She wrote,

“It’s with a heavy, heavy heart and great sadness that I want to let you all know that my best friend, my husband, my everything, Mike Jenkins, went to heaven this morning. Please keep us all in your prayers. I will update as I know more.”

Born and raised in Westminster Mike was a professional strongman competitor who also represented the United States many times. He won the Arnold Strongman Classic title in 2012 too.

Besides, he played football before making his transition into strongman competition in 2007.